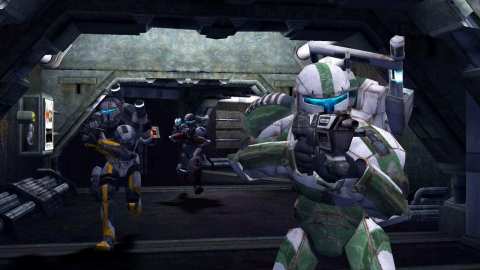 The long awaited Switch port of Republic Commando makes its way to the eShop this week, along with Breathedge, the Knockout City beta, and more.

Yes, there are other games this week out for Nintendo Switch gamers, but Republic Commando is here and I think that pretty easily takes the spotlight. One of the very best Star Wars FPS’ ever, Republic Commando allowed gamers to take on the role of a Clone Trooper squad commander.

Taking place between Attack of the Clones and Revenge of the Sith, the game is firmly ensconced in the Clone Wars era. You’ll battle against some Star Wars staples for the glory of the Republic in this, and yes that includes against lots and lots of droids. If you’re a Star Wars fan, and love first-person shooters, definitely give it a look.

Also out this week is Breathedge, a space-based survival game, Ty the Tasmanian Tiger 2, and lots more. Scroll down and have a peek.

Jason's been knee deep in videogames since he was but a lad. Cutting his teeth on the pixely glory that was the Atari 2600, he's been hack'n'slashing and shoot'em'uping ever since. Mainly an FPS and action guy, Jason enjoys the occasional well crafted title from every genre.
@jason_tas
Previous Symbiotic terror continues in Marvel’s Extreme Carnage
Next John Romita Jr. returns to Marvel Comics for new mystery event