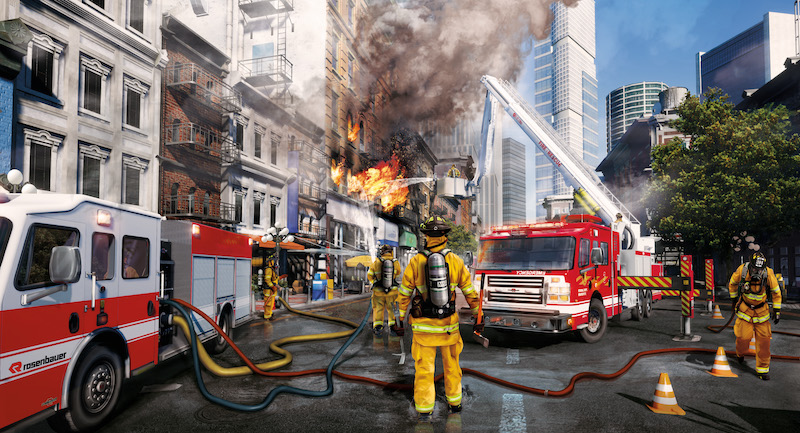 Trailer: Douse a raging inferno in Firefighting Simulator – The Squad

If you’ve ever wanted to know what it’s like to battle an out of control conflagration, now’s your chance. Firefighting Simulator is out now.

In Firefighting Simulator – The Squad players slip into the role of a US firefighter in order to experience first-hand what it means to fight fires as a team of firefighters in a large US city with more than 30 varied operation sites.

In exciting missions, the team members will proceed to action with a selection of 5 officially licensed firefighting vehicles by Rosenbauer America – such as the TP3 Pumper® and the T-Rex® Articulating Platform – to extinguish fires and save people from the flames. While single players take control of their AI-controlled colleagues with the help of the intuitive command interface in order to give them instructions on how to proceed, in cooperative multiplayer mode up to four players can take action together as a team to prove their team spirit and skills in the field of firefighting.

From astragon Entertainment und Chronos Unterhaltungssoftware, Firefighting Simulator – The Squad is out now on the PC.

Jason's been knee deep in videogames since he was but a lad. Cutting his teeth on the pixely glory that was the Atari 2600, he's been hack'n'slashing and shoot'em'uping ever since. Mainly an FPS and action guy, Jason enjoys the occasional well crafted title from every genre.
@jason_tas
Previous Cyberpunk’s latest Night City Wire explores Xbox gameplay
Next Tropico 6 (Switch) Review