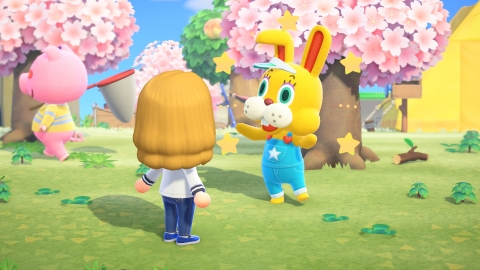 Celebrate Easter, or “Bunny Day” as they call it, in Animal Crossing: New Horizons this week. If you’re looking for something else though, uh…

Easter isn’t much of a holiday this year. I think that’s fair to say, since most of the globe is afraid to even set foot outside of their homes. But even so, there’s a way for Nintendo fans to have a little fun thanks to Animal Crossing: New Horizons.

The just-released game is hosting a special event for the holiday, under the Bunny Day title. So what is it? Well, Zipper T Bunny has arrived on the island, and will be hiding eggs. But these are no mere collectibles, as the eggs will allow finders to “create special items, including furniture, flooring, décor and accessories”.

The special event is on now, and will run through the 12th of the month, which is Easter Sunday. So you have some time to go hunting, but not a ton.

Other than that, there are also some sales on this week, as well as a host of fresh additions to the eShop. Unfortunately, there’s really nothing noteworthy. Check the full list below.

Jason's been knee deep in videogames since he was but a lad. Cutting his teeth on the pixely glory that was the Atari 2600, he's been hack'n'slashing and shoot'em'uping ever since. Mainly an FPS and action guy, Jason enjoys the occasional well crafted title from every genre.
@jason_tas
Previous Resident Evil 3 Remake (PC) Review
Next Resident Evil 4 getting deluxe vinyl pressing