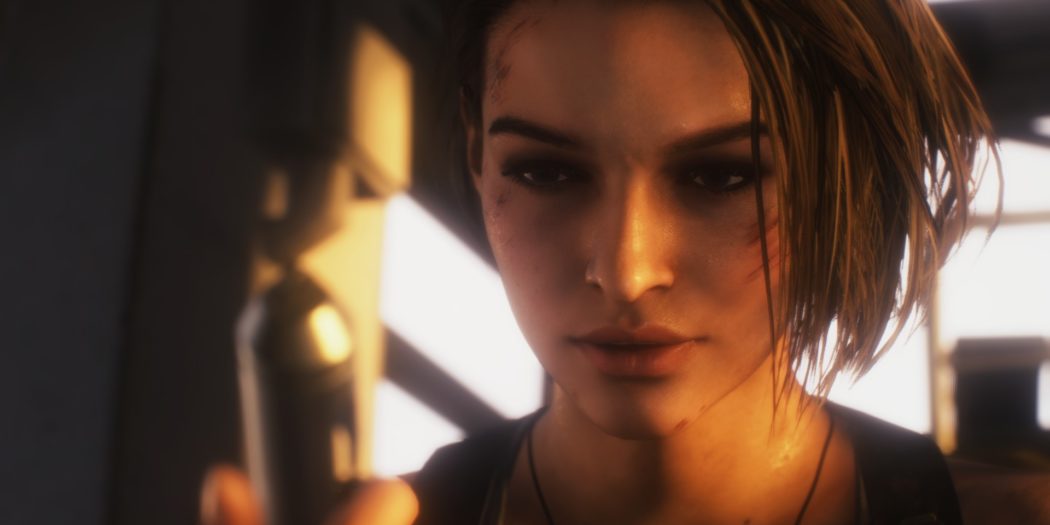 Resident Evil 3 returns to complete the Raccoon City saga. Does the late-90s classic still hold the same thrills and chills? Yep, that and plenty new ones.

This is everything that I have ever wanted in a Resident Evil 3 Remake. It has Jill Valentine for one thing. But if that’s enough, it also has the perfect balance between survival horror and action sequences. And then of course, there’s the hulking Nemesis himself.

While the game is a bit shorter than I would have hoped, it’s still an excellent entry in the reinvigorated Series. I am happy to announce that I have finally completed the game 100% too. Actually, that is why this review is a little bit late.

Anyway, let’s get right down to it.

Resident Evil 3 Remake has ALL of the positive gameplay mechanics from the Resident Evil 2 Remake. That includes the third-person perspective and the excellent gunplay. But this time, there’s the addition of a nifty new mechanic: Jill’s Perfect Dodge and Carlos’ Counter Punch.

The addition of the new mechanics is a welcomed one. The streets of Raccoon City, while less suffocating than the halls of the Raccoon Police Department (from Resident Evil 2), are still filled with more undead whose only goal is to eat your brains.

Gone from the game are the disposable sub/defensive weapons from Resident Evil 2 Remake. These items functioned like disposable lifepoints. If you had a knife or a grenade at your disposal, instead of getting bitten by an enemy zombie, Leon or Claire would either stab their assailant or blow them up.

In my opinion, removing the sub-weapons is a good way to balance the already overpowered perfect dodge. Mastering the new mechanics will essentially allow players who are either new to the series or are mainstay veterans to clear the game without taking so much as a single hit.

While that is difficult to achieve, it is not impossible. And more or less that’s because Jill and Carlos can perform their respective special moves. And if done perfectly, players will be rewarded with about a second’s worth of slow motion. That’s where you can shoot the enemy freely with your weapon of choice.

Returning to the series too, are the red explosive barrels scattered around Raccoon City. And you’ll find the addition (or re-addition if you include RE5) of generators as well. Those you can shoot to stun hordes of the undead.

All in all, the gameplay of Resident Evil 3 Remake is extraordinarily similar to Resident Evil 2 Remake. It’s definitely better overall however, and in all of the right places.

One concern of mine is the lack of puzzles as well as the relatively boring “QTEs” or “Quick-Time Events”. Understandably, they made Resident Evil 5 and 6 more action than survival horror. Their presence in this game is something that I’ve questioned numerous times as a well executed cutscene is definitely better than the “Hold W to escape from looming threat” QTE that you go through at least thrice at the start of Resident Evil 3 Remake.

I am also disappointed at the game’s short length, because after the success of Resident Evil 2 Remake, I feel like Capcom could have and should have done more with Resident Evil 3 Remake. Instead, we are “rewarded” with the multiplayer mode of Resident Evil: Resistance. While that is fun on its own, it’s definitely something that isn’t a priority for me.

Maybe Capcom can fix Resident Evil 3 with a future Mercenaries DLC or expand the game with the Clocktower or something. As for right now, I am taking off major points for my RE3 review just because of how short the game is.

Not a ton of bang for the buck

On that same note, replayability is a concern, because of how short the game is and how little it offers post-game. Instead of more scenarios, players are treated to a single playthrough separated between Jill’s and Carlos’ sections, and the average completion time for people I’ve watched online (and my own playthrough) is around 5 hours.

After about one more playthrough, I was able to cut my time down to about an hour and a half on average which is really short especially because I’m not rushing or speedrunning like Resident Evil 2 Remake. If I were to describe both games with a single term, then Resident Evil 2 would be labeled “Backtracking” and Resident Evil 3 would be “Linear”.

There are a few puzzles in the game that are more annoying than challenging so I’ll take a point off of that too.

I was able to finish both with no deaths though, through trial and error, as well as watching YouTube speedruns from Resident Evil’s best of the best.

The graphics are amazing. Thanks to Capcom’s Resident Evil Engine, Resident Evil 3 Remake looks and performs so well that it’s hard to imagine how optimized it is and how well it performs. You don’t even need an excellent graphics card to play the game at a stable 60 FPS. And if you do have something more powerful, then the game can and will definitely look flat-out gorgeous.

On the other hand, because of the presence of more monsters on-screen at any given time, the “gore” system of Resident Evil 2 is no longer present in the game. See, back in RE2 Remake, you can actually cut-off the limbs off the zombies. That way you could simply run by them instead of taking them out completely.

Just like Resident Evil 2 Remake however, ammo conservation is still a priority and you absolutely should not kill each and every enemy you encounter, especially not Nemesis. Sometimes, running away is the best option. Moving back to my original point, because of the presence of more enemies on screen, zombies in the far distance aren’t rendered properly.

The music is also pretty good, but not amazing. My favorite track in the game is the Subway’s Theme which is the perfect introduction to the Raccoon’s decaying streets. It is a slow build-up that gradually gains more steam and tension as it goes.

While the rest of the songs are perfectly fine on their own, I still prefer Resident Evil 2 Remake’s Original Soundtrack. For example, Leon’s Escape Theme “Collapse’ is an impeccable track for an excellent game. I just don’t feel the “oomph” from Resident Evil 3’s soundtrack especially because it is more action-oriented than Resident Evil 2 Remake.

The Voice Acting is on-point as well. I love how sassy and strong Jill is. She’s definitely my new favorite female protagonist. But even so, in my opinion Carlos just stole the entire show. I wouldn’t mind playing more sections of the game as him!

Maybe we can have a DLC detailing his 12 hour travel between the RPD and the Clocktower.

Resident Evil 3 Remake is every bit as good as Resident Evil 2 Remake. While RE3R has certain advantages over RE2R, it also falls short in some aspects. That includes its shorter length, its limited replayability and its bundling with Resident Evil: Resistance.

If not for these issues, then Resident Evil 3 Remake might have qualified for game of the year 2020. Instead, it just doesn’t live up to its full potential. But even so, it is still an excellent game which can be easily fixed with a DLC or two.

Resident Evil 3 Remake is still an excellent game, but one that just barely lives up to the hype and greatness of its predecessor. Even with its shortfall in duration, RE3R looks incredible, plays great, and is an extremely exciting (though short) campaign. While this isn't the end for Capcom's glorious run, they can still learn from this and make the next game better.