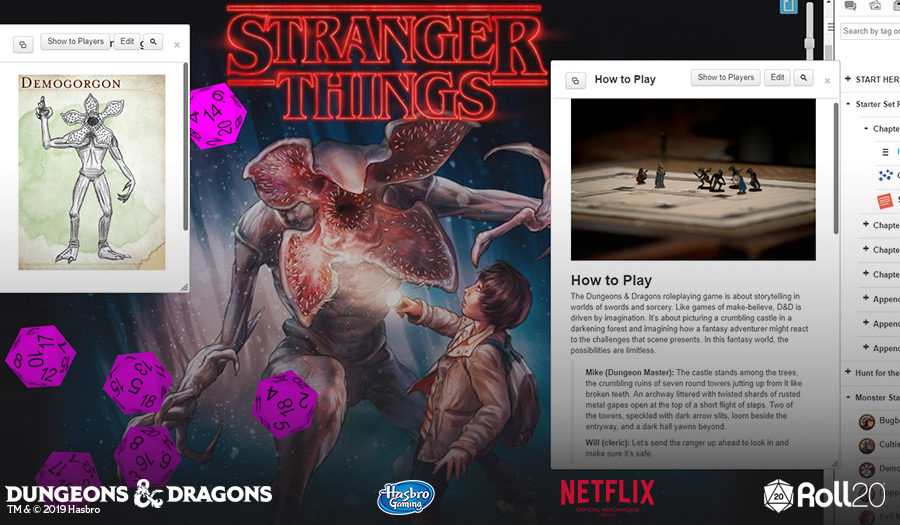 Something stalks you from the shadows, something dark and ominous. You can barely make out its shape at first, but it almost looks human… till it’s head unravels into an array of jagged teeth! It lunges at you!

Yes, Stranger Things has come to the world of D&D. The Netflix show has played off of the classic tabletop RPG, most notably in its first season, and now it’s got a full blown special edition of the game all to itself.

While most fans are probably aware that there is a boxed edition, there’s a digital one too. That comes courtesy of the folks at Roll20, who specialize in making tabletop RPGs playable over the web. Think of it as online multiplayer for the pen and paper set.

The digital version of the game, which is available now on Roll20’s platform, includes:

Ready to get questing? Check out the title on the Roll20 Marketplace. It’ll run you $14.99 USD.

Jason's been knee deep in videogames since he was but a lad. Cutting his teeth on the pixely glory that was the Atari 2600, he's been hack'n'slashing and shoot'em'uping ever since. Mainly an FPS and action guy, Jason enjoys the occasional well crafted title from every genre.
@jason_tas
Previous New retro X-Men Marvel Legends hit pre-order
Next Immortal Realms: Vampire Wars brings the undead to turn-based strategy