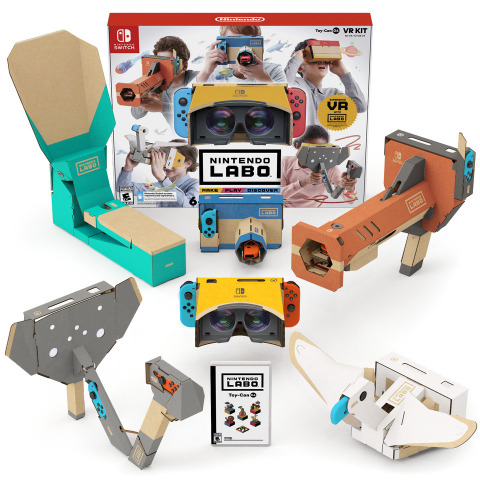 Nintendo has adopted virtual reality! Well, kinda-sorta anyway. The Labo VR Kit will give you a taste of the format, and is in stores now.

As Labo goes, this might be the best idea yet. The Labo VR Kit is… a VR Kit for your Switch. Of course, it’s not as grand a setup as a PSVR or Vive or anything like that, but it’s pretty neat regardless. And if you’re someone who owns a Switch and wants to try VR but never has, it’s kind of a cool way to dip your toe in the water.

“Nintendo Labo: VR Kit is another unique Nintendo Labo experience that further blends the physical and digital worlds to bring the gameplay to life,” said Doug Bowser, Nintendo of America’s Senior Vice President of Sales and Marketing. “Many of our young fans – and even some of our older ones – have yet to try virtual reality, so this is an approachable way for kids and families to get introduced to this new world.”

It should be noted that none of the games included in the Kit are all that deep. They’re not meant to be though, as Nintendo says that each one is “designed to be shareable, fun and social”. So that basically means that the Labo VR Kit is the opposite of more traditional VR setups. Still, it’s got the same feel to it.

And finally, there are a pair of expansion packs.

Finally, if you do pick one of these up, and you want more out of it than just the canned activities, Nintendo is updating a few of its triple-A titles for VR. More like 3D experiences, Super Mario Odyssey and Breath of the Wild will have modes that can use the Labo VR Kit.

Jason's been knee deep in videogames since he was but a lad. Cutting his teeth on the pixely glory that was the Atari 2600, he's been hack'n'slashing and shoot'em'uping ever since. Mainly an FPS and action guy, Jason enjoys the occasional well crafted title from every genre.
@jason_tas
Previous Star Wars Episode IX trailer debuts with official title
Next Star Wars: Fallen Order gets first trailer