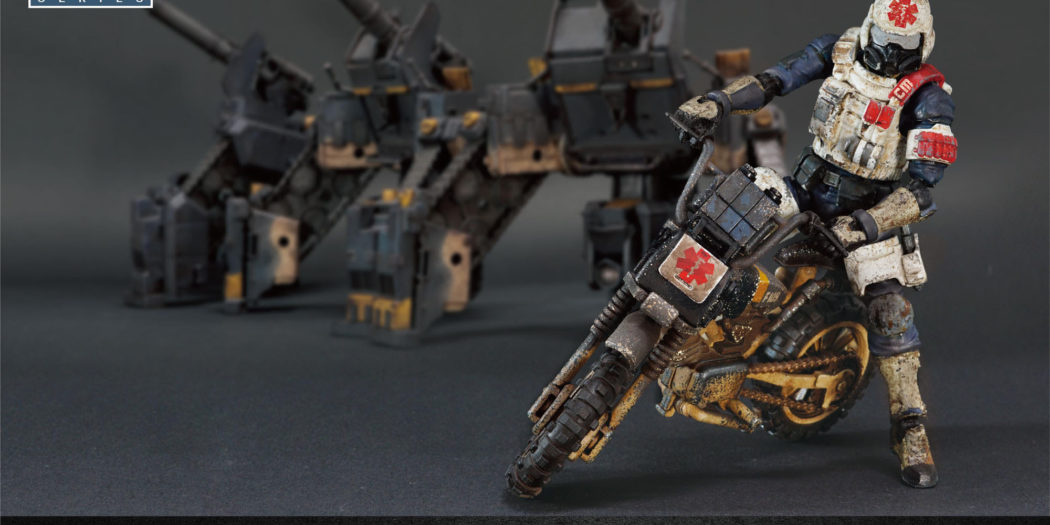 I’m not all that familiar with Acid Rain as a toy line. Then again, a lot of people might be in that same boat. It’s not a mass market thing. Acid Rain is more of a couture toy line, one that looks like it sports some quality detail and paint apps.

Both of those elements look like they carry over into this latest offering too – the Wildebeest.

The pack includes both a vehicle and a rider, both cast in the 1:18th scale, which is pretty much G.I. Joe scale. The bike, which is the actual Wildebeest, is what it is, but the rider is a little more interesting.

Not only does this figure include standard “cavalry” gear, but also a set of field medic equipment. Both look pretty cool, but I love the inclusion of the medical gear since it isn’t all that often that toy lines produce them.

After numerous adjustments on the ORV-M design, the Agurts military finally created a speedy, lightweight and operationally practical military motorcycle with an elite suspension system that facilitates smooth transport. The model was named Wildebeest WB3f.

The Wildebeest WB3f can weather rapid speeds in a variety of mountainous, desert and jungle terrains, and can withstand the impact of over 20 foot jumps. When deployed alone on the battlefield, they typically act as rapid transportation for weapons, ammunition and supplies across all types of battlefields and terrains. Often used in rapid attacks, reconnaissance and emergency responses, the Wildebeest WB3f has been widely distributed to various brigades of the Agurts military.

Jason's been knee deep in videogames since he was but a lad. Cutting his teeth on the pixely glory that was the Atari 2600, he's been hack'n'slashing and shoot'em'uping ever since. Mainly an FPS and action guy, Jason enjoys the occasional well crafted title from every genre.
@jason_tas
Previous Star Wars TIE Fighter comic mini-series coming in April
Next Marvel goes back in time for Symbiote Spider-Man