Hot on the heels of the Mega Man collections released earlier this year, the Blue Bomber returns in classic form. This is Capcom action at its most iconic.

It’s been a while Mega Man. 2010 was the last time a new Mega Man game saw release in the original version of the series, though it was a retro title. The game was styled to look and feel like an NES game, and in that it succeeded wildly. As for a truly new experience though, that is what we’ve got here with Mega Man 11.

Though some of the gameplay is the same as what you’ve played in Mega titles before, there’s a good deal new. That includes one particular set of controls that truly changes the Mega Man experience. And of course, this game looks better than anything ever released in the series before. 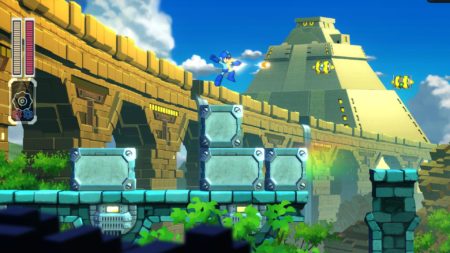 Yeah, you… you know what the story is. Doc Wiley is on the loose, and he’s converted a bunch of bots to the dark side. As Mega Man, you’ve gotta stop ’em!

To be fair, there is a bit more to the story, with Wiley and Doctor Light’s story going back to the very beginning, when they were young men. Apparently, when the guys were less grey, they clashed over a device that Wiley had invented. It’s purpose was to supercharge robots, of course, dangerously so.

Years later, Wiley is back and he’s got a redone version of that very device, called the Double Gear System. As it so happens, Light has the prototype for that Double Gear. Seems he saved it from that earlier time, and he’s primed to use it on Mega Man, making him super to go up against Wiley’s monstrosities.

As I mentioned, the graphics are superb here in MM11.

Everything is bright and colorful, with some effects that look nicely nostalgic, reminiscent of the SNES installment of the series. Most of what’s here though, is stunningly modern, with excellent special effects, and flat-out great animation.

Mega Man himself looks awesome, with a slight riff on the original design. Capcom mainly just tweaked the amount of detail on MM, but he otherwise looks as you remember him. That’s a good thing by the way. The designs are pretty solid on the new robot masters too, which is nice. 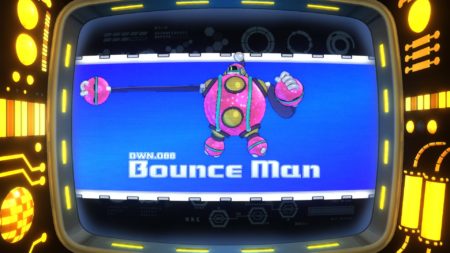 Almost all of them are reused ideas from previous Mega Man rogues galleries. Though at this point it’s kind of hard for them not to be. MM has used almost every gimmick possible I think, so it’s forgivable. At least they look cool, which might be the most important thing.

On the flip side though, the music is pretty forgettable fare. I also didn’t really care for the voice work, which sounded amateurish in parts, and downright cringy in others. Though… now that I think about it, I’m not sure what I expected. Even with all that though, hearing the classic Robot Master intro music is a treat that I’ll never get tired of.

Going back to the Robot Masters, their weaponry is likewise similar to what’s come before. It’s all cool though, and the weapons are just as much fun to use and mix and match against the rogue-bots as ever. But those assorted pieces of recovered tech are not what makes MM11 so special in terms of Mega Man games. That would be the Double Gear, which is way more important than you might have assumed.

The Double Gear System has two different effects, each bound to a trigger button. Mega Man can either supercharge his power level or his speed, slowing everything around him down by great amounts. that in particular is incredibly useful when things are going crazy, you’re under heavy fire or trying to hops across spinning gears. Good stuff. I can’t say I used the power booster as much, but it was nice to have. It really does change the effects of each weapon, sometimes with excellently destructive results.

Also kind of neat is that the right stick allows you to hot swap Mega Man’s acquired weapons. And on top of that, you can also switch forward and back in Mega Man’s storehouse of weapons quickly with the left and right bumpers. Other than that, Mega Man has his usual jump, blast (and charged blast), and even two Rush abilities like the jet and spring. 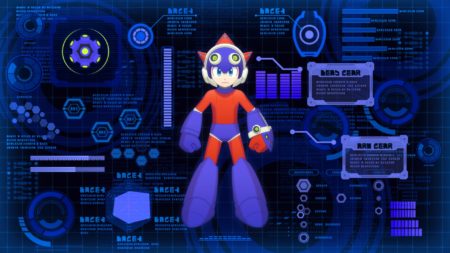 Mega Man 11, for what I think might be the first time in the series, has a difficulty select. Yes, it’s come to this, and I’m actually glad that it has.

Out of the original Mega Man games, I’m pretty sure I only beat the first three. And let me tell you, it wasn’t easy. At this point in my gaming life, I doubt I could do it again. So while it’s nice to be able to play through Mega Man 11 with the classic difficulty intact, it’s also pretty nice to dial the down and actually make it through the whole game with relative ease. That said, I wouldn’t recommend playing on the easiest of settings, as it actually makes the game’s infamous spikes all but harmless. That takes out a bit too much of the challenge in my opinion.

Also new this time (I think) are the parts that you can build in between missions. Dr. Light’s pal Auto can craft parts for MM that can do everything from take a spike in the foot without damage, to carry extra energy tanks. Speaking of, you no longer have to collect tanks in the missions (though you can). 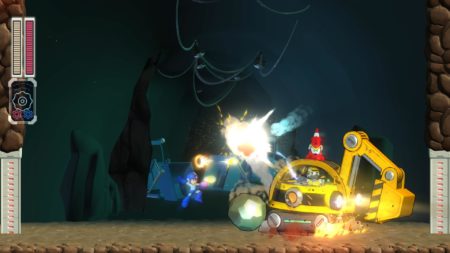 Roll can forge items for you to use, like energy tanks and weapon-refilling tanks. All of this comes from the ability to collect bolts when you’re playing. That’s another new element. They’re pretty simple, and work like coins, allowing you to buy everything that I mentioned above.

I’m pretty comfortable saying that anyone who’s a Mega Man fan would enjoy this game. Capcom has crafted a worthy 11th installment for the series that shines with visual splendor and fun gameplay that actually manages to shake up the tried and true formula.

Great additions that pretty much all fit in - 88%

If you're a Mega Man fan, then chances are you'll dig Mega Man 11. Capcom builds on everything thats come before with this one, keeping the series firmly grounded in its roots while adding in new elements that feel right at home, like the Double Gear System and the item shop. Add in some of the best side-scroller graphics that I've seen, and you have a winner.

Jason's been knee deep in videogames since he was but a lad. Cutting his teeth on the pixely glory that was the Atari 2600, he's been hack'n'slashing and shoot'em'uping ever since. Mainly an FPS and action guy, Jason enjoys the occasional well crafted title from every genre.
@jason_tas
Previous Crackdown 3 release date revealed, up for pre-order now
Next New Nintendo Switch and 2DS bundles set to arrive for Black Friday