Olivia Pryde, con-artist extraordinaire, and her momentary rival in the city, Calix the con-man find themselves at the behest of members of the Inquisition. Ser Aaron and his freshly introduced associate require a favor, and are convinced the cunning pair are the ones for the job.

The second issue of Dragon Age: Deception returns us immediately to the familiar tavern that staged the entire first issue, with only a short-lived break in the middle for their actual thievery. That deed itself is short-lived and happens between the panels, and the promised Qunari threat is now only mentioned by continuing promises that the city is surrounded, and it will fall.

Olivia Pryde’s character is a little more defined, but not her goals, and not her history. Ser Aaron comes further to the forefront instead, his own complicated relationship with the woman the closest the readers will get to a personal connection.

The new Antivan Crows and Ser Aaron’s associate do little to add to the story, and are likely only tools to prepare for the third issue. The sibling pair who will make for further antagonism aren’t half as threatening as they’d like to be, making it difficult to take any sense of impending threat without a grain of salt. 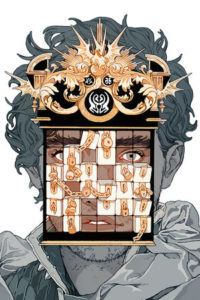 Dragon Age: Deception’s latest chapter reads smoothly, but what are surely major pieces to the plot lack the weight of forward movement. Probably because we’re still sitting and chatting in the same tavern, with the same looming dangers, and only minor revelations about the characters.

All of it is topped off with a sudden and forced bit of steam that confuses more than surprises.

The art continues in the vein of the first novel- serviceable and warm- but its high time Fernando Heinz Furukawa was given a chance to draw something other than the tavern walls. At least Sachin Teng gets to give us another intriguing cover.

Dragon Age: Deception #2 is not a step forward by any means. The story is light on threat and fails to build or maintain any momentum. We’re getting closer to promised drama, but we’ve come another thirty-two pages without it. Everybody’s grand machinations, from antagonists to Olivia Pryde to supporting cast, are still elusive and vague. Without them, it’s hard to be invested in any of the characters.

Dragon Age: Deception #2 fails to do anything interesting with the groundwork of the first issue. The moment-to-moment dialogue works, but there's only so many pages we can spend in the same tavern in Ventus. Hopefully the third issue will bring about some much needed threat.

Brutal Gamer's Nintendo Editor began his gaming life a little late- at five years old. But he's made up for it in the two decades since, gaming and writing about gaming with the same passion, fervor, and unrelenting love as his five-year old self.
Previous Call of Cthulhu (PS4) Review
Next Return to Nuketown in the latest Call of Duty: Black Ops 4 trailer