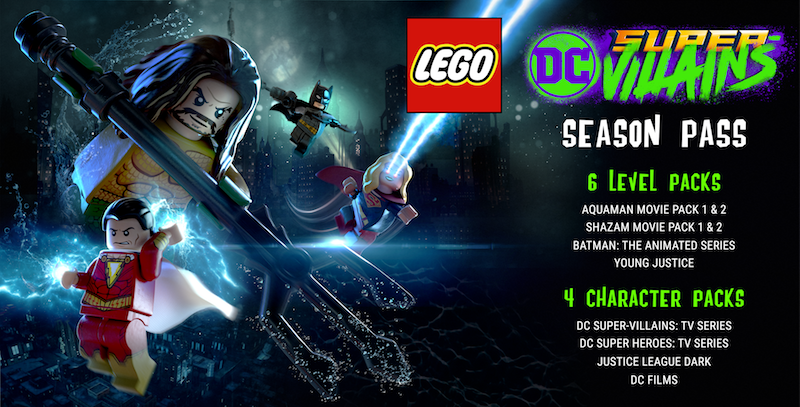 Coming up quick, LEGO DC Super-Villains will indeed have a Season Pass. Tilted towards the DC movies, the pass will have both Aquaman and Shazam content.

You kind of had to see this one coming. Pretty much all of the bigger games these days get Season Passes after all, so that LEGO DC Super-Villains is getting one should shock no-one. Honestly though, the content announced today is actually pretty cool. If you’re a big DC fan, you might want to think about buying in.

A total of six level packs and four character packs will be included in the pack. Aquaman will get two packs that will play off of the movie, hitting on December the 2nd. As for Shazam, the good captain will be on the receiving end of another two. And yes, those packs will be themed after the movie as well, though Shazam doesn’t land in theaters till next year.

So what rounds out the offerings?

Well, lots and lots of DC TV-content actually. Bet that put a smile on your face.

LEGO DC Super-Villains Deluxe Edition will include the pass, so if you’re getting that then you’ll get all of the above. You’ll also get an exclusive LEGO mini figure in the box if you go that route with Lex Luthor in his blue techno-Superman suite. The Deluxe Edition is also available digitally, though instead of the mini-fig, you get a Justice League Dark Character Pack. Pretty cool.

If you don’t buy the Deluxe Edition, you can still get the Pass of course. You’ll just have to buy it separately. And if that’s your preference, then you’ll be happy to know that the Pass is just $14.99 USD.

LEGO DC Super-Villains lands on consoles and the PC on October 16th.

Jason's been knee deep in videogames since he was but a lad. Cutting his teeth on the pixely glory that was the Atari 2600, he's been hack'n'slashing and shoot'em'uping ever since. Mainly an FPS and action guy, Jason enjoys the occasional well crafted title from every genre.
@jason_tas
Previous Battlefleet Gothic: Armada 2 to hit the PC in January, new content announced
Next Divinity: Original Sin 2 quests onto Xbox One and PS4