Terminator: Sector War takes the franchise back to where it all began, in the year 1984. Sort of. It’s the 80s alright, but this is a whole new story.

Two Terminators went back in time to 1984, one to kill Sarah Conner, and another targeting NYPD Officer Lucy Castro, a rookie cop assigned to one of the worst sections of the city.  Isolated and unable to call for backup, Castro faces off against the relentless T800, relying on unlikely allies to see her through to dawn.

I am extremely torn about this comic, and I say that as a fan of the franchise (through T2 anyway). Sector War takes things back to the 80s for Terminator, which is a very good thing from where I sit. But even though it has a lot going for it, the story seems to have some T-800 sized holes in it. That’s a real shame, because I dug a lot of what writer Brian Wood worked out for this first of four issues.

This story takes place in 1984, at the same time as the original film. The catch is that this one takes place in New York City, and man is that a cool setting. I remember this era for the city pretty well, and it’s all here, from the boxy police cars, to the cops’ light blue uniform tops.

This is a Terminator… right? 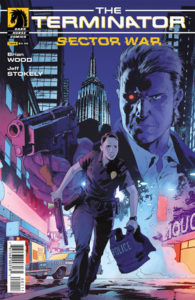 You’ll notice I’m mentioning the police a few times there, and that’s because the main character is a member of the force. Lucy Castro doesn’t have a great life, with a loser boyfriend and brutal hours on the job. Of course, I’m sure that looks like heaven once a Terminator comes a-calling.

A Terminator, by the way, that does not look like actor Arnold Schwarzenegger in the slightest. Sure he’s big, but he doesn’t have Arnold’s face at all. Maybe that’s due to licensing issues? I don’t know, but it’s one of the issues I had with this book, especially since the movies have basically established that the T-800s look alike.

He also doesn’t act like a typical Terminator. He’s… nice. Yes, he’s trying to kill Officer Castro, but he actually interacts with tertiary characters instead of ignoring them or treating them purely as fodder. While he has no problem killing his targets (there are more than one), he also unnecessarily says “thank you” to a bodega owner. It’s weird.

Maybe this is all going somewhere, so I don’t want to completely say I don’t like it, but I kind of don’t like it. As for Castro, she’s okay. I guess. She doesn’t really come across as super unique character. Though there’s nothing particularly wrong with her either, and she’s likable enough.

While the story isn’t where I’d like it to be (yet), the art isn’t bad at all. Jeff Stokely’s isn’t a name that I know, but he’s solid on Terminator. His work is almost manga-y, with a cartoony bent to it, yet it has a gritty edge. That might sound like a weird mishmash, but it comes across pretty well.

Again, his Terminator looks nothing like Arnold, but I’m going to guess that’s not the artist’s fault. He is nonetheless big and imposing, and when he incurs damage it looks cool. I also really liked the red eyes Stokely is using here, even though it’s not that film-accurate.

Stokely also gives NYC itself a nice and dirty look. The walls are covered with graffiti and the city is crime-ridden, all of which is perfect for the 80s. There’s also an Easter Egg for fans that calls back to the first Terminator movie. I won’t spoil it, but it’s just one panel, and it’s fun to see.

I guess I liked the look of this comic more than the story, though that’s not bad either. What’s throwing me is all the stuff that just doesn’t feel “Terminator” enough. Still, there’s more than enough here to get me to come back for issue two.

Though I’m not sure if I’d really recommend getting into the Sector War at all if you’re new to the franchise or more of a casual fan.

But the actual Terminator doesn't come off as you'd expect. Is there a reason? - 65%

Terminator: Sector War is starting slow, but that doesn't mean it's a bad first issue. Brian Wood does a good job setting things up and Jeff Stokely's art has a cool edge to it. I'm just not getting some of the choices though, since the Terminator doesn't come across exactly like you'd expect. If you're a fan, this one's probably worth getting. If not, maybe wait on the trade to see how the full story shapes up.

Jason's been knee deep in videogames since he was but a lad. Cutting his teeth on the pixely glory that was the Atari 2600, he's been hack'n'slashing and shoot'em'uping ever since. Mainly an FPS and action guy, Jason enjoys the occasional well crafted title from every genre.
@jason_tas
Previous Black Ops 4 multiplayer beta coming soon, Blackout hits next month
Next The Dark Eldar have arrived for Warhammer 40,000: Inquisitor – Martyr