Vampyr from DONTNOD does a great job at taking a bite out vampire lore and certainly does not suck. Make sure to pick up this great adventure and join Dr. Jonathan Reid on the streets of London in 1918.

The Streets Of London Are Full Of Vampyrs 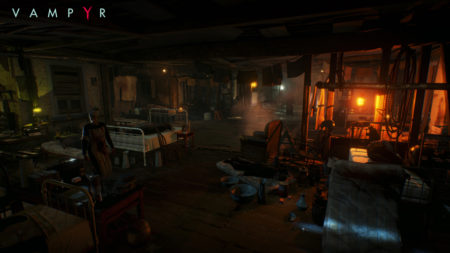 Set against the backdrop of World War I, Vampyr takes gamers to the beautiful streets of London during the Spanish Flu epidemic in 1918. Jokes aside, the setting for this game is dim and grimy. People are dying in massive numbers and the streets are full of propaganda posters. There is not a vacation site and there won’t be a lot of time for photos. There are no children playing and the people that are around town are full of sickness and problems. These people need help, so it is a good thing that Jonathan Reid is not only a vampire, but a doctor as well.

Hello, The Doctor Is In

Players will experience this story as Doctor Jonathan Reid. The game opens with Dr. Reid waking up on the docks, disoriented and extremely thirsty, thirsty for blood. The hunger is driving Dr. Reid mad and in his lust for blood, he winds up killing someone he loves. Without providing too many spoilers, his choice to kill this character will haunt him throughout the story. Making choices is important in Vampyr and these decisions will all types of different ramifications in this game. As a vampire, Dr. Reid will have the need to feed – it is up to the player if he will drain people of their blood or try to use his experience as a doctor and save them. 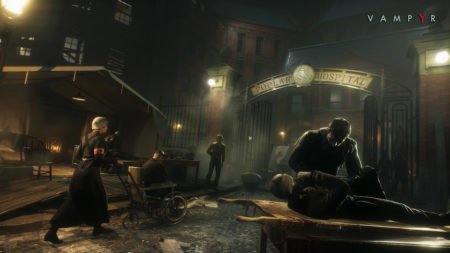 The non-playable characters (NPCs) all have a function to serve in this game. This is accurate for most games, but in Vampyr players will have the opportunity to dive in and learn more about the populace of this quarantined area. Each NPC has a story to tell and will get sick at some point during the game. Dr. Reid has the ability to craft items in the game that can help with a character’s sickness. For example, fatigue is an ongoing problem for the people and Dr. Reid can help by giving them a mixture of chemicals. Dr. Reid also has cures for the common cold, bronchitis, migraines and even pneumonia, and can help stabilize a sick district. 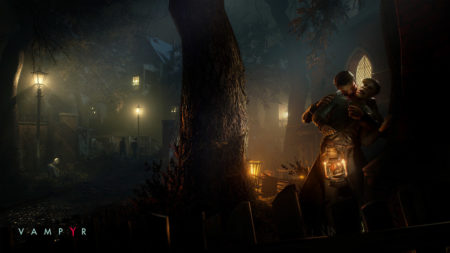 Aside from being a vampire, the central theme of this game is all about choices. Who will Dr. Reid save? Who will he feed on? Will Dr. Reid help quarantined districts or will he let them fall into a chaotic mess? These are just a small sampling of the all the choices players will face as they work their way through Vampyr’s story line. There are four endings to Vampyr, and one of these endings can be completed by never feeding on a single NPC. This is rather difficult though as players will not earn a ton of experience points by only battling other baddies and feeding on rats.

Not feeding on people will leave Dr. Reid seriously under-powered and will make battling vampire hunters a true test of hacking and slashing his opponents. If players are having trouble getting through a particular point in the game, they can always go find a NPC and mesmerize them and then take a juicy bite and suck their blood. Players will be able to see how much experience points a NPC is worth when talking to them. Each NPC has between three and four hints that Dr. Reid can uncover. These hints unlock new information and in turn, make the NPC’s blood more valuable and increases the amount of experience they will provide. These NPCs all live in four districts and Dr. Reid will do a lot of walking through these districts while unraveling the mysteries of becoming a new vampire.

Oh, To Become A Vampyr… 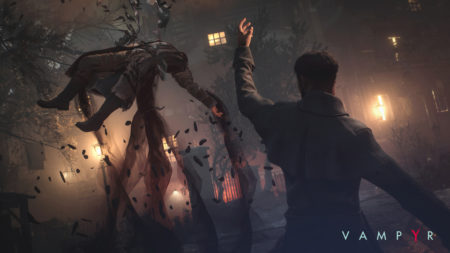 Dr. Reid is not exactly happy about becoming a vampire. He is going to spend the entire game trying to figure out who turned him into a creature of the night. He will have to lurk his way through dark alleys and across abandoned houses as he searches for answers. He has the determination of a Tom Cruise character in Mission Impossible, meaning nothing is impossible. The story is rather good in Vampyr. DontNod has done a great job of weaving in different aspects of vampire lore into this story. There are vampire hunters and other vampires as well. There is even a club of affluent vampires that recruits the good doctor. There is even a little vampire romance mixed as well.

This is a great game and a fun adventure. I do not think there has been a similar game in this vampire setting. On top of that, we get to experience London in 1918 and we get a great experience of this dire time. I like to describe this game as a narrative game with a side of action. There is plenty of combat, but the real star of this game is the NPCs (can’t believe I just wrote that), the branching story line and the choices players must make during game play. There are a few items that I wish were done better, but they do not impede the game. The story is enthralling and I was on the edge of my seat as it unraveled. I would highly recommend picking up and sinking your teeth into Vampyr.

Take Dr. Jonathan Reid through the flu-stricken streets of London in this great narrative-driven action game.

As a fearful proponent, I agree with out robot overlords on House Bill 10010101 - The Full Extermination of the Human Race. But until then, make sure to check out all my writings on video game stuff.
@@docbrown303
Previous Fantastic Four #1 gets yet another variant cover announced
Next Fox N Forests (Switch) Review