The beast is finally here. Well, almost. Mezco Toyz King Kong of Skull Island figure has finally landed on their website for pre-ordering. And he looks awesome as ever.

The King is here

So, first things first, this is the 7″ figure that we showed you at Toy Fair this past February. It’s not the gigantic version, which we’re actually not even sure will ever hit retail. There was no definite word from Mezco at the show, so it might not. It’d be a fortune if it did. And anyway, this small version is every bit as cool looking.

Standing in at that 7″ scale, King Kong of Skull Island isn’t bound to any one version of the ape. Instead he’s unattached to even the recent remake, though he certainly takes inspiration from it and the 1932 original. His accessories, which include a gown-wearing Ann Darrow, tell us that much. 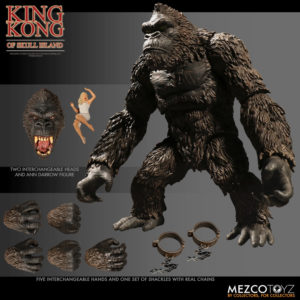 Set to ship out some time this coming November through January, Kong will run you $40 USD. You can secure one for yourself right here. 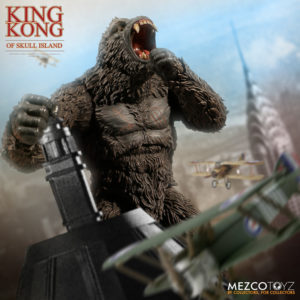 Jason's been knee deep in videogames since he was but a lad. Cutting his teeth on the pixely glory that was the Atari 2600, he's been hack'n'slashing and shoot'em'uping ever since. Mainly an FPS and action guy, Jason enjoys the occasional well crafted title from every genre.
@jason_tas
Previous Masters of the Universe ReAction Figures Wave 4 (Action Figure) Review
Next Sonic Mania Adventures part 4 focuses on Mighty and Ray – and Metal Sonic