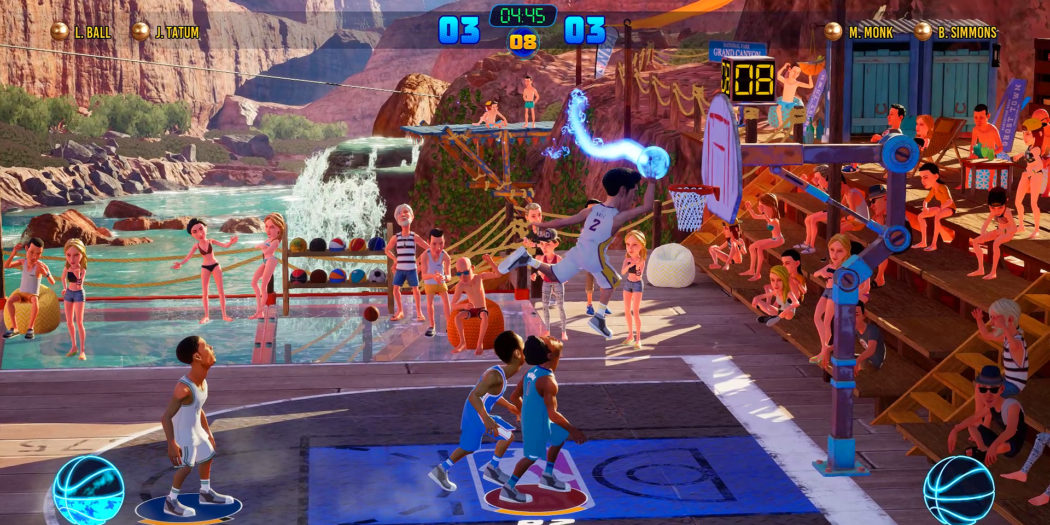 Following up on the original release, Saber Interactive’s spiritual successor to the original arcade basketball phenomenon is almost here. And yes, NBA Playgrounds 2 appears to be on fire.

As a monster fan of Jam during the 16bit era, I have no idea how I missed out on the original Playgrounds, but man does this second go-around look good. As you can see, the new game from Saber offers a lot of what made those classic (unrelated) titles so much fun. Only now, the graphics look as good as the gameplay hopefully is.

The meat and potatoes of this one come in the form of “multiple competitive solo and co-op ladders” and a single player season mode (complete with playoffs). But that’s not all, as you’ll find multiple additional modes like ” four-player online matches, co-op matches against AI, improved matchmaking with dedicated servers, the return of three-point contests, custom matches, and more!”.

As I mentioned in the headline too, there are a ton of players in this game. Saber touts the roster, and they should, since it stars some 200+ players. Included in the game, along with all new power-ups and AI that’s meant to improve on the original, are the likes of:

Impressive list right there. No word on just how many of these superstars are ready to be played right from the jump, and how may are unlockable, but either way that is a power roster. Watch for it to arrive with NBA Playgrounds 2 on May 22nd.

The game will be available for the Xbox One, PS4, Nintendo Switch, and PC.

Jason's been knee deep in videogames since he was but a lad. Cutting his teeth on the pixely glory that was the Atari 2600, he's been hack'n'slashing and shoot'em'uping ever since. Mainly an FPS and action guy, Jason enjoys the occasional well crafted title from every genre.
@jason_tas
Previous Agony’s latest trailer is out, and hell has never been more horrifying
Next Infinity Wars Prime cover unveiled, showcases Thanos himself (who else?)