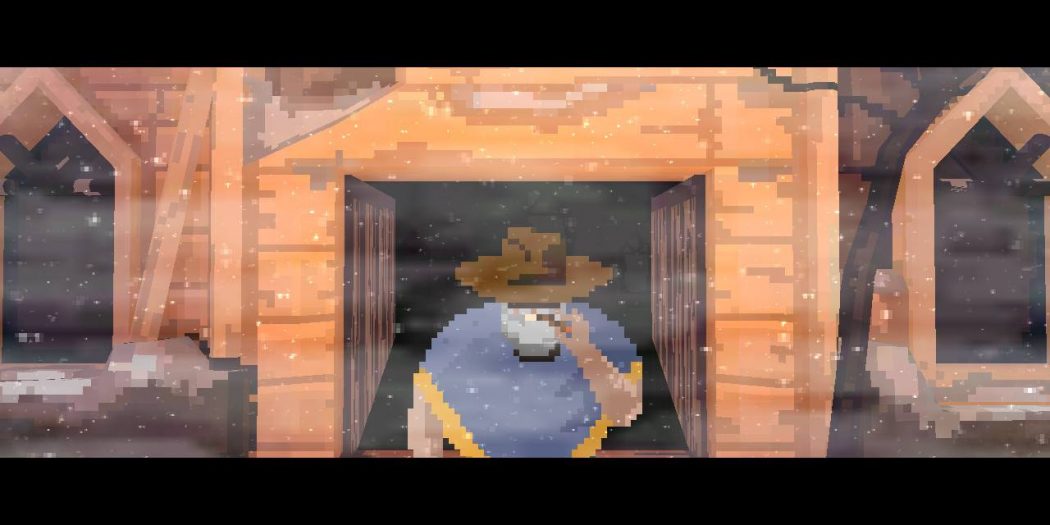 Bombslinger’s Bomberman action is a blast.

Bombslinger is Bomberman for a modern audience.  Slick sprite-work sets up a gritty, simple revenge story about a cowboy whose loved ones are all dead.  With nothing to lose, and an endless supply of explosives, nothing stands in our hero’s way.

Except for roguelike difficulty and mechanics, intense boss-battles and flaming goats, and accidentally trapping yourself with your own bombs.

That’s not just me, right? 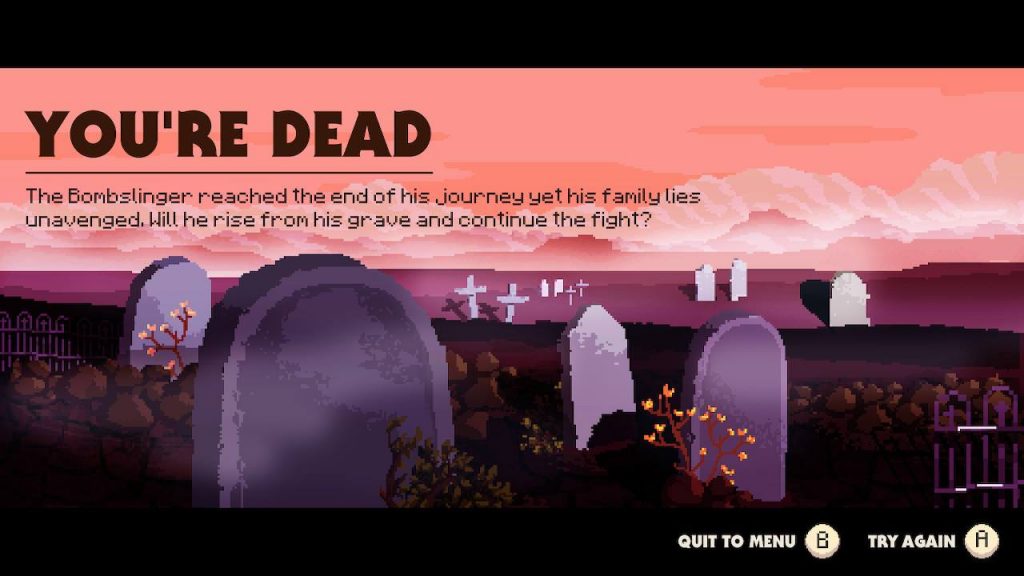 Each single-player adventure is simple.  Four worlds, from corn fields to snowy mountains, are filled with interconnected stages and crazy cowboys.  Blast your way through everything, including a boss at the end of each locale, and have a chance at revenge.  Die, and restart from zero.  Pickups run the gamut, from familiar stat upgrades like bomb power and bomb count, to the unfamiliar, such as shotguns and snake oil.  Shops and chests are intermittent, and give you more hope that you’ll avenge our hero’s burning house.

Bombslinger’s roguelike elements are presented well.  While you’ll initially start with nothing, you’ll unlock starting equipment for every run by reaching specific achievements.  Some of them, such as beating specific bosses, are given as a matter of course, while others, such as beating the game without getting hit by your own bombs, require extra attention. 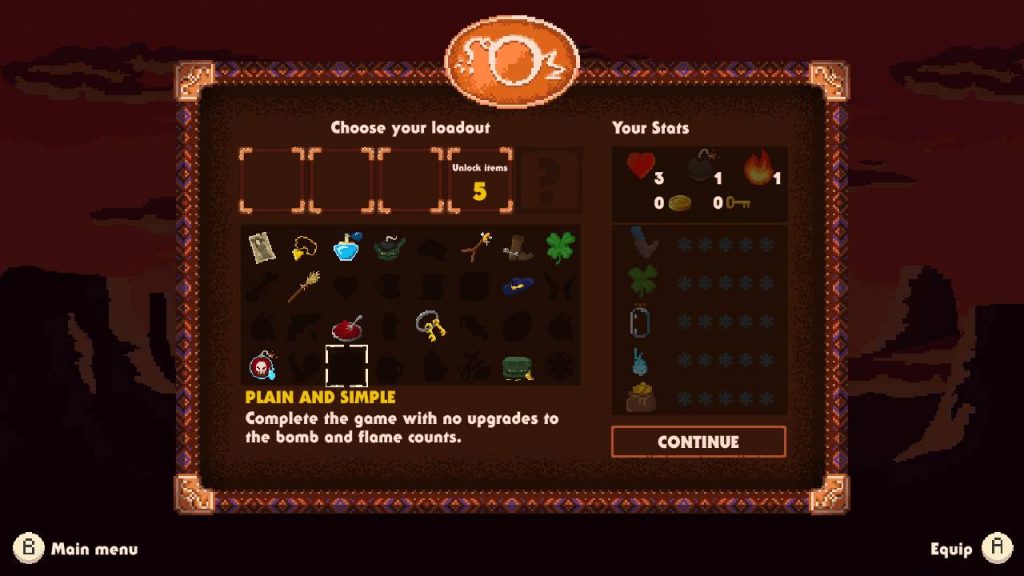 It’s when chasing after these unlockable starting items that Bombslinger’s depth comes to light.  The difference in strategy for facing every enemy when you’re equipped with a single, tiny bomb versus when you’re equipped with a multitude of massive explosions is expansive.  I’ve found gun-toting bad guys to be quite easy with a tiny bomb, since you can just place a bomb right next to them.  In the time it takes for them to shoot, you’re already outside of your bomb range.  But add just one fire power upgrade, and suddenly you have to maintain more distance, or anticipate their pathing.  Other enemies, of course, are made easier by the extra range.  Sickle-wielding farmers attack anyone who gets too close, pushing bombs away at the same time.  There’s little they can do, though, when your bomb can strike them from five spaces distance.

When playing Bomberman games growing up, I never had to consider my bombs or the spacing of the map to such an extent.  Learning enemy attack patterns in Bombslinger evolves the moment-to-moment action of its inspiration.  Working through the procedurally generated stages over and over again gave me a confidence in my bombs that I never had in Bomberman, where it was enough just to walk out of range of my weapons.  Now, boss bullets, explosive barrels, wild goats, lightning bolts, and more will do their best to keep you down.  Despite all that, I was able to (eventually) calmly pick my safe space and watch it all go down around me. 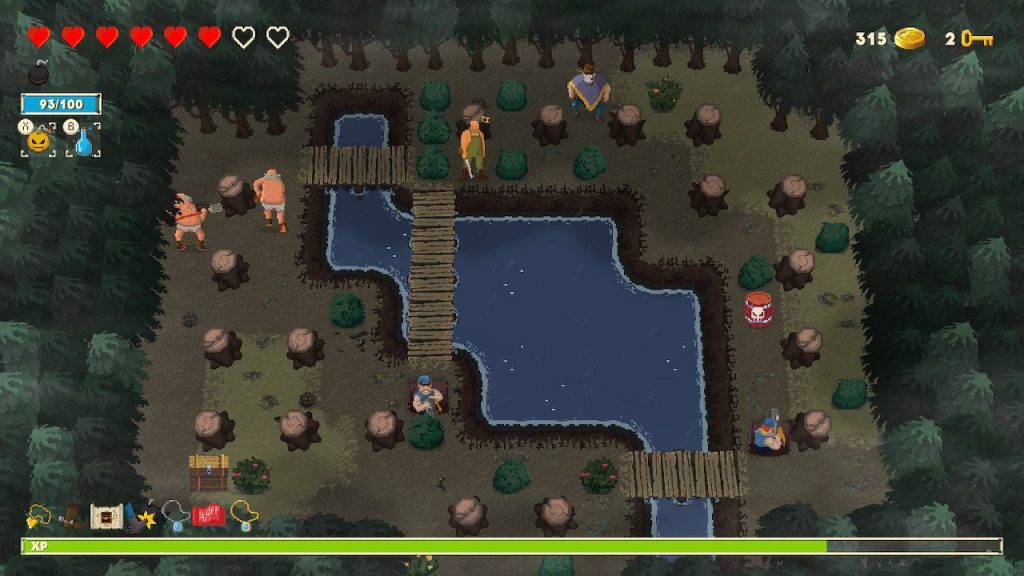 Learning regular enemy habits and boss patterns both contributed to my overall satisfaction when playing.  My best runs no longer had to rely on eight max health-up upgrades, freeing me up instead to focus on spirit caps and regeneration (the resource used for items) for builds focused on guns, or on enormous explosions with full power and bomb counts. Bosses that used to put a cold stop to my forward progress became a relief, because even with one heart left I knew I wasn’t in any danger.

Even when the game did make me good, I always had to be wary of carelessness.  One panicked moment can easily result in a ticket to the grave. Despite my numerous, frequent ends to what were supposed to be perfect runs, Bombslinger never frustrated me. The adventures are short enough that an abrupt end was only the start to another chance.  Perhaps failure on its own was inspiration enough to drive me to try a new line-up of starting items, switching out max starting speed for bonus experience and gold drops.

Of course, when a run’s end came by something other than failure, Bombslinger became immensely frustrating.  The game crashed on me three times.  Fortunately, the events that sparked the crash were consistent, so I was mostly able to avoid replicating the horror of being ejected.  My advice is not to be hit by the sickle-farmers, and definitely avoid leaving a boss room after defeating him via the double doors.

Whether the cause of it is a glitch or unclear instructions, I’ve completed missions without receiving the reward as well. Beating the game without bomb or fire upgrades (which is my preferred method of playing, I’ll admit) twice doesn’t seem to have been good enough for “Plain and Simple,” and even maxing my spirit regeneration for “Spirit of the Wild” hasn’t met the “Max out your spirit regeneration” requirements. I got a 4-hit combo once too, but “No Chain No Gain” is no go. Did spectral enemies simply not count? 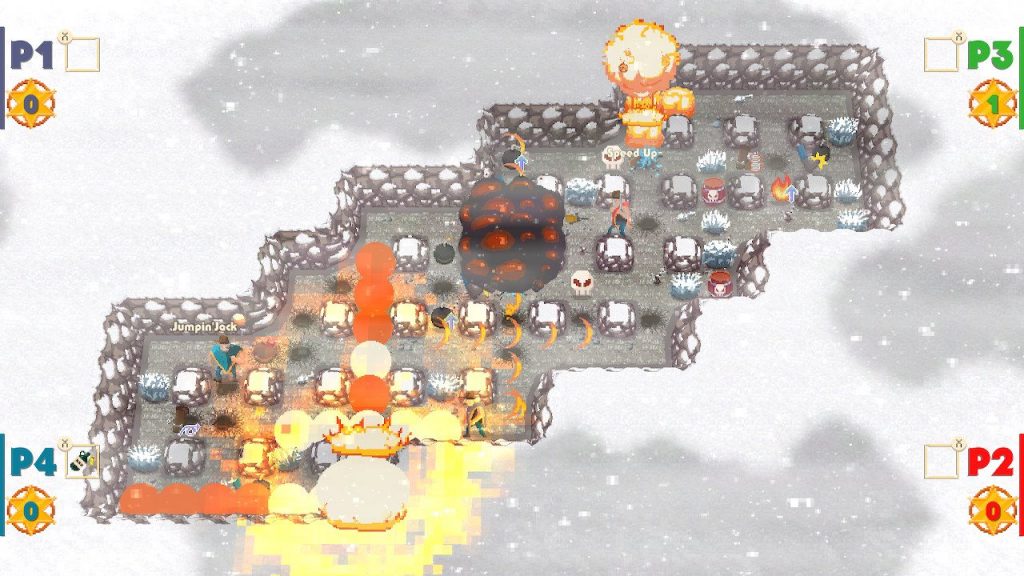 As much fun as the procedurally-generated, roguelike adventure is, Bombslinger, like Bomberman, only gets better when you put four players in one arena.  Don’t waste time with the 5-kill count death matches: Bombslinger’s matches benefit from the added length of 20 kills, when the ebb and flow of the battlefield rewards the focused mind. AI Bots put up a pretty good fight against beginners, too. Unfortunately, there’s not much you can do to change up the options.  There’s only two modes (Death Match and Last Man Standing).  There’s no ability to add in teams, and no way to change up item drop rates, for gun-only matches, or starting upgrades, in case you wanted everyone to start with, say, max firepower.

Regardless of the options, there’s nothing but fun to be had in 4-player death matches.  The weapon pick-ups, from revolvers to nuclear bombs, add an exciting wrinkle to the Bomberman formula, and the sheer number of size of explosions provides Hollywood glee to the gritty game. Get a group together and you’ll have a blast. 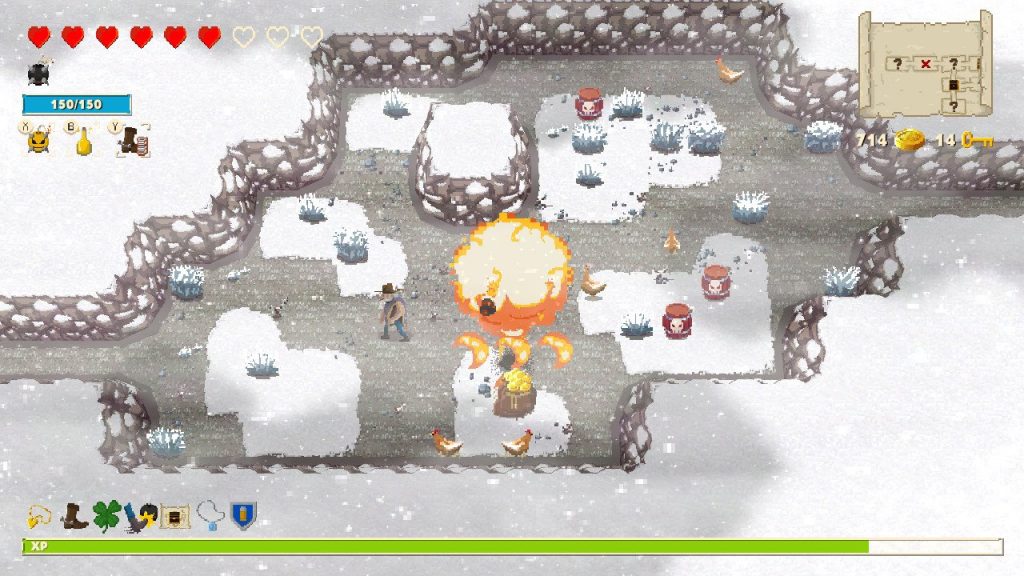 Bombslinger alleviates frustration with excitement to play again, as only the best roguelikes do.  While more options in multiplayer would provide local, couch-play longevity, and the ability to play online would be nice, Bombslinger’s four-player action is great for Friday night fun.  It’s adventure mode is engaging (as long as it doesn’t crash- as of writing, there’s already been a patch, so hopefully the issues have been fixed), and learning the best ways to beat enemies and bosses with different builds is immensely satisfying.

Bombslinger brings the mechanics of Bomberman into a perfectly matched genre. Multiplayer gives the short adventures (shorter if you die) life support, but the mechanics are strong enough to bring you back until every item has been unlocked. A more expansive MP suite would have been nice, and pesky crashes and stubborn unlocks diminish enthusiasm for "just one more run" sprees.

Brutal Gamer's Nintendo Editor began his gaming life a little late- at five years old. But he's made up for it in the two decades since, gaming and writing about gaming with the same passion, fervor, and unrelenting love as his five-year old self.
Previous May Games with Gold: Metal Gear Solid 5, Super Mega Baseball 2, Streets of Rage
Next Full Venom trailer hits, sets up anti-hero Eddie Brock and sinister symbiote