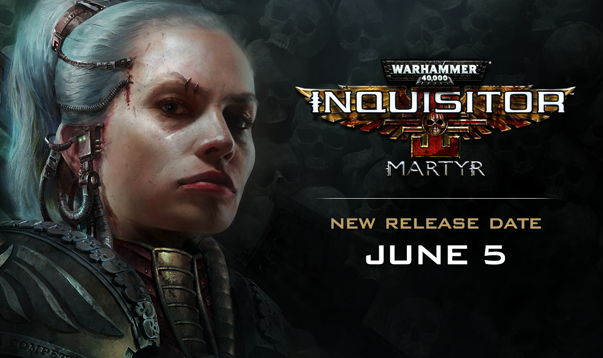 It’s a slight delay of game for the latest title to take advantage of the Warhammer 40k license. An action/RPG, Inquisitor – Martyr will be slipping out of May and into early June.

Neocore Games, Bigben, and Maximum Games have announced that they’re hotly anticipated take on Warhammer 40k will be debuting just a tad later than they’d hoped. May 11th was the launch set originally, but it’s now June the 5th.

In order to offer players the most seamless gaming experience possible, the game will be released simultaneously on Xbox One, PlayStation®4 and PC on June 5th.

That’s not a ton of exposition, but then again the delay isn’t all that long. And honestly, the game is looking sharp. If they need a little longer to work some things through, gamers probably won’t mind too much.

Inquisitor – Martyr is crafted in the mold of Neocore’s Van Helsing series, which is a first for 40k. Set against an army of “heretics, mutants, and Chaos Daemons”, players will find themselves in the armor of an Imperial Inquisitor in the Caligari Sector of space.

Of course, there’ll be solo play, but there’s also going to be online co-op for up to 4 players. That sounds like a decidedly cool option, especially since this is a Warhammer title. Getting a part together to play is half the fun.

Here’s the latest dev diary/trailer for the game, to give you a taste of what’s to come:

Jason's been knee deep in videogames since he was but a lad. Cutting his teeth on the pixely glory that was the Atari 2600, he's been hack'n'slashing and shoot'em'uping ever since. Mainly an FPS and action guy, Jason enjoys the occasional well crafted title from every genre.
@jason_tas
Previous A Way Out (PS4) Review
Next Action Comics #1000 arrives with loaded slate of variant covers