Mezco continues to post One:12 Collective figures this year. This time with yet another great-looking Marvel offering. A comics-based Blade is ready for pre-order right now.

Eric Brooks was being born when a vampire attacked his mother during childbirth, passing on a series of enzymes that transformed Eric into a Dhampir – a being tainted by a vampire’s kiss, but not converted. Now infused with all of a vampire’s powers but few of their weaknesses and determined to avenge his mother’s death, Eric Brooks arms himself with weapons that are fatal to the undead and fashioned himself into the vampire hunter known as Blade.

Another mystical (kinda) Marvel hero, Blade joins Doctor Strange in Mezco’s One:12 line, and he does it in style. Similar to characters like the Punisher, Deadpool, and DC’s Deathstroke, Blade here is absolutely loaded with accessories.

Of course, in addition to stakes, swords, and his signature shades, he’s also got a pair of face sculpts. And yes, one of them has his fangs bared.

Blade is up for pre-order right now on Mezco’s online shop, and is scheduled to ship out some time in the October to December timeframe of this year. You can order yours here, and shock out his full stats below. 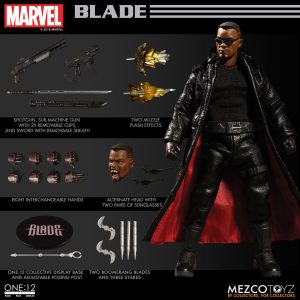 The One:12 Collective Blade Figure Features:

Jason's been knee deep in videogames since he was but a lad. Cutting his teeth on the pixely glory that was the Atari 2600, he's been hack'n'slashing and shoot'em'uping ever since. Mainly an FPS and action guy, Jason enjoys the occasional well crafted title from every genre.
@jason_tas
Previous Marvel Comics’ main Star Wars book hits issue 50
Next Nintendo Download: Ample Parking, Day or Night!