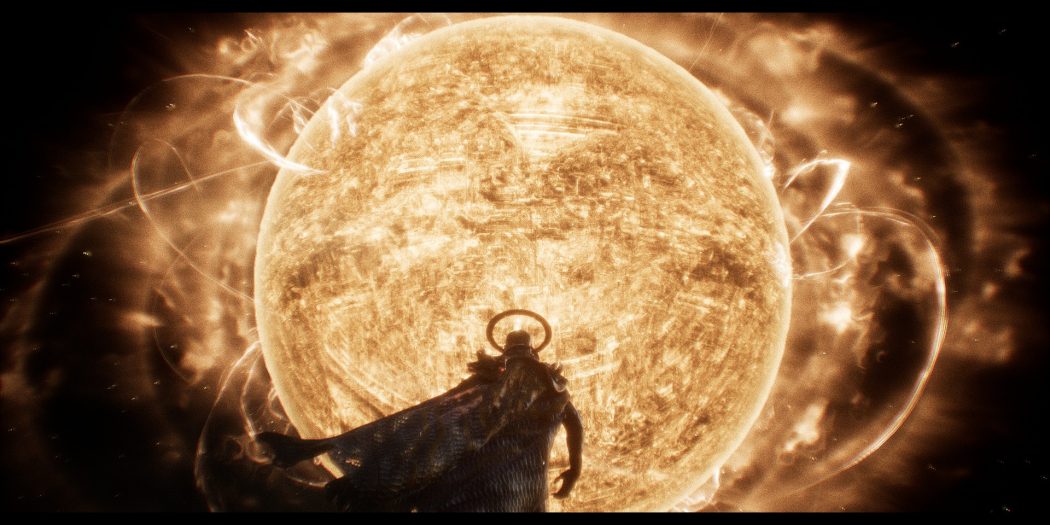 Our Review – A Test Of Patience

Golem Gates tells the story of the Harbinger, a supremely powerful being who has the ability to manipulate a powerful substance called the Ash. Some sort of world-ending apocalypse was enacted long ago, leaving the surrounding planet a desolate wasteland overrun by machines. These machines are controlled by the Golem Gates, which are amplified by manipulators of the Ash controlled by technologically adept warlords. A godly presence guides the Harbinger along the campaign’s 15 missions, toward the eventual goal of liberating three territories held by the powerful warlords. The Harbinger’s task is to destroy the Golem Gates, take control of the territories, and execute the warlords for their crimes.

A major flaw with Golem Gates’ narrative presents itself right off the bat. The old adage of show-don’t-tell has been abandoned in favor of lengthy exposition thrown in front of players before beginning each campaign mission. The Harbinger’s motivation is frustratingly never explained over the course of the story. The first real attempt at world-building happens during the second act of the game.

The entire first act’s plotline holds no grounds in the narrative moving forward, making that entire chapter feel lost amongst the greater narrative. The clumsy, sudden shift didn’t change the fact that there was nothing engaging about the narrative up to that point. Nothing is told through the torrential exposition. The godly presence and the various interruptions of the warlords don’t flesh out their characters, add context to your battles, or explain what’s going on in the world around you. The missions themselves don’t add much to the overall narrative apart from sudden one-liner quips from the current enemy warlord.

Your Harbinger Is Under Attack

Apart from the campaign, Golem Gates offers three separate game modes for players. These include a modifier-heavy Challenge Mode, a horde-survival Survival Mode, and a head-to-head Versus Mode. Survival allows up to two players to take on an enemy horde, while Versus allows up to six players to compete against each other. Combinations of three objectives make up each mission players undertake. They will either set out to destroy a specified number of Golem Gates, take out a powerful commander, or survive for a specified amount of time.

An ever-expanding deck of cards filled with 100 unique units and buffs allows players to complete these objectives. While in a session, decks become shuffled and cards received for placement on the battlefield to accomplish the mission objective. Each successful match brings the promise of a randomly-generated reward of at least two cards, sometimes up to four depending on the game mode. Players also may receive a currency of ash, used to purchase a daily shuffle of new units from the Forge.

Golem Gates in its current form is free of any sort of microtransactions to gain a pay-to-play gameplay advantage. Every card and Ash token is earned from the in-game rewards system. With that said, the current RNG-based rewards feel severely out-of-place in a thirty dollar title. The random generation of player decks and cards comes straight from games like Clash Royale and other free-to-play mobile games. The approach of luck-based random draws becomes amplified during an actual match. Sessions become tests of luck as a result of this particular design decision. Players aren’t allowed to personally select their starting cards before a game begins, relying instead on re-rolling to another card if the current hand isn’t to their satisfaction.

The random generation becomes worse once in-game. Every in-match tactical decision predicates itself on random chance. Unlucky starting rolls could start one off with unusable late-match units and buffs, forcing players to wait for a period of time until they draw lower-tier unit cards. This can be incredibly frustrating for head-to-head matches since another player will often get a clear advantage which their opponent can’t recover from. The fast-paced nature of the tactical gameplay does not mesh with the card-draw system.

Golem Gates thus becomes a bare-bones tactical battle. Poor unit descriptions cause one to simply guess which units are counters to each other. Different strategies become sidelined without knowing basic unit strengths and weaknesses. So instead of proper counter-measures and formation make-ups, the most sound strategy for winning becomes swarming capture points as early as possible. This is the Zerg-Rush problem amplified, allowing players gaining more energy to cruise to an easy victory. But even a great hand and sound rushing strategy won’t guarantee players a positive outcome from their experience.

Golem Gates suffers from a myriad of technical issues. The lowest graphical settings didn’t prevent the second act of the Campaign’s predilection for severe lag. The seventh and ninth chapters were the worst offenders, turning the game into a frame-by-frame slideshow. Other instances of frame drops and lag presented themselves outside of campaign set pieces. Whenever large hosts of units battled each other, there was a noticeably large frame drop that steadily became worse as more units joined the fray.

On top of laggy input and an inconsistent framerate, numerous game-breaking bugs exist in the title. Shifting levels would often leave unlucky units stuck on top of environmental barriers all too often. Poor pathing would result in enemy AI moving in place, clearly attempting to go through walls towards an objective. On top of these issues, this writer personally experienced three corrupted save games and two hard crashes during the campaign.

These issues plagued the fourteenth chapter to an unplayable point. Progress became frustratingly halted due to multiple hard crashes originating at the same exact state during the mission. Unfortunately, the repeating crash consequently meant that there was no way to finish the campaign to completion.

Real Time Strategy games have proven a successful cornerstone for the gaming industry’s yearly release cycle. And over the past five years, a constant tide of Total War games and StarCraft II expansions have put the bar high for top-tier AAA RTS releases. Apart from the AAA space, last year’s indie hit Tooth and Tail garnered well-deserved praise in the RTS space for its fairly approachable mechanics and Orwellian-esque narrative.

Golem Gates had a legacy of quality RTS games which it couldn’t overcome. For every positive addition the game provides, it significantly stumbles in other areas. An interesting world design became hampered by a droning narrative with headache-inducing sound effects. Varied map layouts found themselves flawed by poor unit pathing, frustrating RNG mechanics, and barebones tactical gameplay. The myriad bugs, glitches, and technical issues overwhelm any possible enjoyment players could have gleaned.

Golem Gates is a frustrating test of luck and patience. It lacks some much-needed polish to make the game playable.

Mike Allio is a writer from the Greater San Francisco Bay Area in California. He's a passionate creative, and when he's not writing he loves playing video games. Some of his favorite series have darker tones to them - Dark Souls, Bloodborne, and Mass Effect are just a few of his favorites. Check him out on Twitch.tv/adaywalker, and follow his Twitter handle @TheMikeatNite to learn what he's up to.
@TheMikeatNite
Previous Hitman: Sniper Hits 10 Million And Is Free
Next LEGO The Incredibles gets a first trailer and details