Home / Action Figures and Toys / Hail to the king baby, One:12 Co Ash is up for pre-order from Mezco 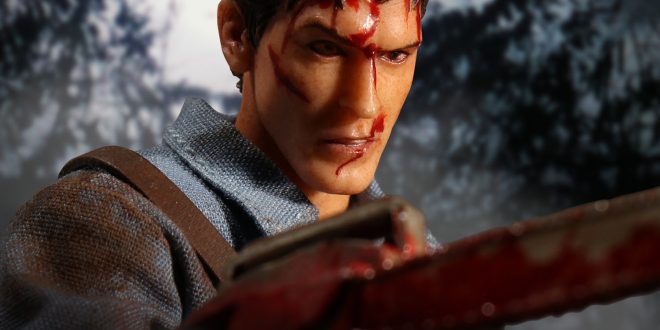 Hail to the king baby, One:12 Co Ash is up for pre-order from Mezco

He’s been a long time coming, but Ash is finally joining Mezco’s One:12 Collective. The figure is up for pre-order right now.

Good, bad, he’s the guy with the gun

We’ve seen Ash promoted for a good long while at this point. As a big fan of the movies and TV show, it was honestly kind of maddening. Mezco has had him on display at a few shows/cons, and looked great! Thing was, it seemed like he was never going up for pre-order. Thankfully, that changes as of today, as Mezco has officially bumped the figure up to the pre-order level.

This is a really great-looking figure too, with a whole bunch of accessories, including a “deadite” Ash head! Just keep in mind though, that this is Ash from Evil Dead 2, so he doesn’t have any kind of robotic hand. He does however, come packed with a human hand, so you can display Ash before he becomes the “hero” version of the character.

Watch for this one to hit some time over the August – October timeframe (this year). You can pre-order him here.

And here’s what you’ll find in the box:

THE ONE:12 COLLECTIVE ASH FIGURE FEATURES:

Jason's been knee deep in videogames since he was but a lad. Cutting his teeth on the pixely glory that was the Atari 2600, he's been hack'n'slashing and shoot'em'uping ever since. Mainly an FPS and action guy, Jason enjoys the occasional well crafted title from every genre.
@jason_tas
Previous The Walking Dead 809 “Honor” Recap
Next Warhammer: Vermintide II celebrates successful beta weekend, extends test