Keyed up for the release of the Legend of Zelda Encyclopedia from Dark Horse? Then you’re gonna love this news.

Chances are, if you’re a Zelda fan, that you’re already looking forward to this incoming tome. Heck, you probably already pre-ordered yourself a copy, didn’t you? Well, you might want to move that order over to what Dark Horse has just revealed, cause it’s a fair bit more awesome.

How’s a classic, LoZ golden game pak-styled edition of the aforementioned strike you? Yeah, it comes with a sleeve too. What a way to cap off the trilogy of books. 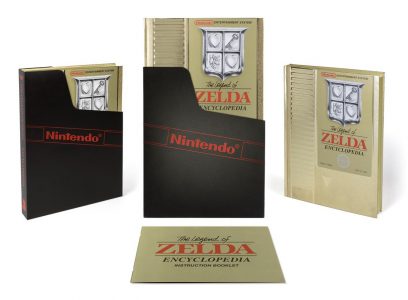 This is the last in a series, as we posted a while back. The original book was Hyrule Hystoria, which was followed by Art & Artifacts. And now this Encyclopedia will round out the trio that assembles into the “Goddess Collection”. Hard to say it’s anything but a stunner.

Both versions of the new book will be in stores this coming April. If you want in on the deluxe edition though, it’ll cost you a tad more. The book is currently priced in at $79.99 USD, and is up for pre-order.

Jason's been knee deep in videogames since he was but a lad. Cutting his teeth on the pixely glory that was the Atari 2600, he's been hack'n'slashing and shoot'em'uping ever since. Mainly an FPS and action guy, Jason enjoys the occasional well crafted title from every genre.
@jason_tas
Previous The next Thor epic starts in issue #700 with the return of the Odinson
Next Surprise- GameCube controllers now work with the Switch.