Hal Jordan has been to the Emerald Space defeated Sinestro, and come back from pure willpower. Hal’s still got a long way to go though, starting in Hal Jordan And The Green Lantern Corps Vol 3: Quest for Hope.

If you missed our coverage of Vol 1, you can find that here, and Vol 2 here. 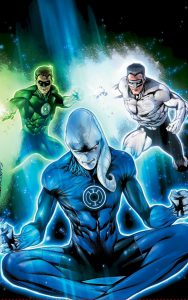 Hal has brought the Green Lanterns back. Now they stand face to face with their sworn enemies, the Yellow Lanterns. Soranik and John Stewart are proposing a partnership. Two Lantern Corps, one agenda. On top of that, Hal Jordan and Kyle Rayner are off in a remote location in search of the Blue Lanterns.

Any Yellow Lanterns not willing to join this merger are asked to either join, or be detained. That in itself sounds like a great task.

Kyle and Hal locate Saint Walker, the last of the Blue Lanterns, in the midst of a great standoff. This battle is the first of multiple we will see in Volume 3.

This book in particular is unique, in that the source of the Lantern’s powers become in question.

An intergalactic cab driver informs Corps Leader Steward that Guy took off in search of a particular Yellow Lantern. If that’s not risky enough, Gardner leaves his Green Lantern ring in his bunk. Guy has gone off to do what he does best: to pick a fight.

There’s only room for one top dog, as it were. Guy knows this, and wants to make sure he’s not about to be pushed aside. So he seeks out Sinestro’s dog, Arkillo. Only a no-rings-allowed knock-down, drag-out fight is going to make this mutt happy.

These two are more than happy to knock each other senseless, and is precisely what they accomplish. Arkillo is laid out on the ground, and Guy is about to fall next to him, when Stewart and Soranik find them. The grudge match is finished, though not without its price: Soranik’s left eye!

Guardians Ganthet and Sayd task Kyle the White Lantern to revive additional members of the Blue Lantern Corps. No small job, reviving multiple personalities. Though somehow, somewhere, the task was thwarted, and it also had its cost. The white lantern ring is destroyed, leaving Kyle Rayner powerless momentarily.

If you don’t think that’s enough drama for one book, you’re in for a suprise. A mysterious man appears out of a cavern full of materialized will, while another appears from the future.

This time traveler wears a Green Lantern ring, but is not a Lantern. His name is Rip Hunter, and he is a time police, of a sort. Keeping things balanced between the past, present and future. He claims that the Green Lanterns of his era have been extinguished!

The other mysterious man also seems to be from the future. Though his purpose is much more nefarious than Rip. He seeks to resurrect the Yellow Lanterns in the glory of Sinestro’s era, and wipe out the Green Lanterns in the process.

While Hal’s willpower was strong enough to forge himself a new ring, and to come back from the brink of extinction, his strength was enough to affect artifacts that he had used. Particulary, Krona’s Gauntlet, the prototype for what was to become the Green Lantern rings.

The battle to defeat Sarko from the future will require the strength of each and every Lantern to be at their best. In order to stand a chance, they must lay down their rings, and hold the line while Hal addresses the problem he helped to create.

This 194-page graphic novel is packed full of twists and turns, and all the better for it. Watching Guy Gardner and Arkillo stand toe-to-toe, the Lanterns forced to give up their powers in order to survive. It is a good time to get back into the Green Lantern stories, if you’ve drifted away. Robert Venditti has a way of really making you want to immerse yourself in these books.

Hal faces great odds, John merges Corps, and Kyle life takes a quick turn. This is not a chapter of the Green Lanterns that you want to miss out on.

A fan of media on multiple platforms, I am always watching or playing something! Who knows what I will be on to next?
@mackeyp42
Previous Episode 8: Rabbid for Rabbids
Next Teen Titan Starfire debuts in Injustice 2