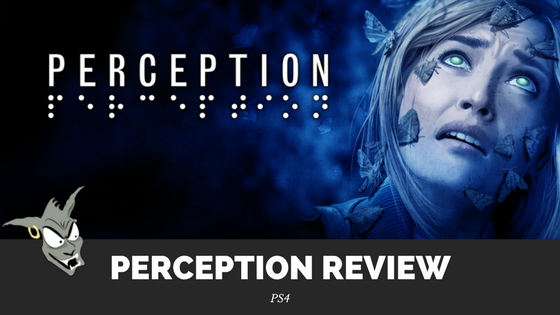 A fear of the dark is something almost everyone has to face. But for Cassie Thornton, a blind woman, it’s something she wants to conquer.

She’s a bit of a Daredevil

In Perception, Cassie (and you) navigate by the tapping of her cane. With a type of echolocation, you can see glimpses of the space around you. That’s something that you’ll be doing for most of Perception. 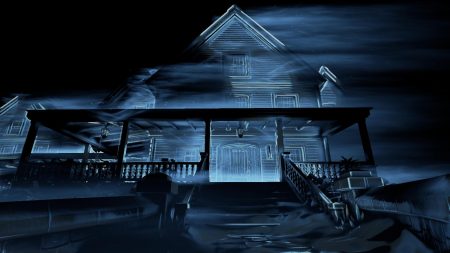 As the story goes, Cassie has been having dreams of a house called “The Estate at Echo Bluff”, located in Gloucester, MA. She winds up traveling to the house and goes in alone. As she walks through this creepy, boxed up house, she starts to hear doors closing behind her, ghosts screaming, and fire starting out of the bloom.

Before you even start the game, you also have the option of having either a silent protagonist who would only speak during the most important parts of the game or a “Chatty Cassie”. Though the chatter helps you get to know her and the world a little bit better, I found. For the most part of the game, Cassie comes off charming and witty too but knows when stuff gets real.

There are four chapters in Perception, and my playthrough took me about 4 – 8 hours to complete. Throughout these chapters, the house jumps through different time periods to look 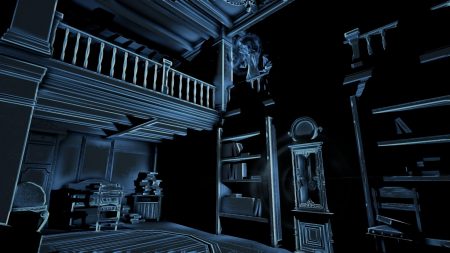 at the horrors that people endured there. The game has you teleporting to different parts of the house as well… or was Cassie just dreaming? The answer is a little unclear, but those segments hold as the transition period between chapters.

Now, it can’t be a horror game without an evil presence, and that presence’s name is… the Presence; way to go on that one. Inspiringly enough, for the most part (at least through my play through), the Presence didn’t bother me at all.

It got me good once, and that was because I made too much noise tapping my cane, which is how you attract it. The Presence is always shambling around the house, but do you rarely just stumble across it. The trailers had me believing that it would be more aggressive, but it wasn’t. Instead, it simply was just kind of there.

Echoes in the green

When running from the Presence, or just walking around landmarks and finding hiding spots, the objects will be marked with a green outline for Cassie to remember that it’s there. Rarely did I use the many hiding spots the game provided for me though, which was kind of a wasted opportunity. 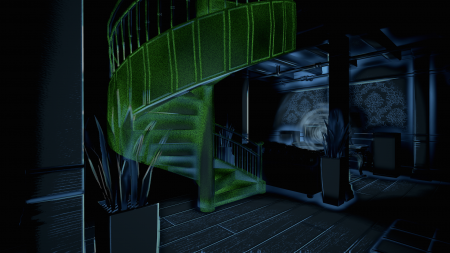 It’s your job to remember the outline/feel of the house and where things are at. If you do get lost, you can use Cassie’s Sixth Sense to find your next objective. Also, if the Presence is nearby, your screen will flash different colors and you’ll hear a ton of moths – you’ve been warned.

How we get behind the characters this world gives us is through audio logs, touchstones, and by scanning things with Cassie’s Delphi text-to-speech app.

Audio logs are what you would expect audio logs to be like. They’re in pretty much every videogame out there nowadays, but touchstones are a little bit different. Cassie uses her intuition that allows her to understand the memories imprinted onto objects. 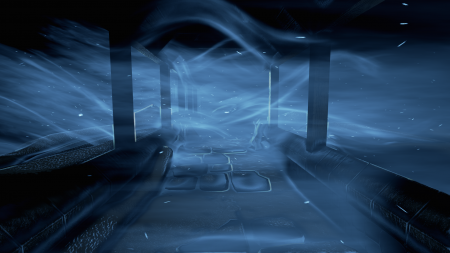 Then there’s that app I mentioned. Her Delphi scans something and repeats info back to her, or connects with an online operator who describes the item to her. Yes, she has a phone that works with her. And yes, she could call the police. But the thing is that she actually wants to stay in this madhouse and see what is really going on.

There are also collectibles in the game and quite a few witty PlayStation trophies that they make great uses out of. Perception rewards exploration and that is what took up most of my time. Seeing how the house changes and shifts when I figure out a puzzle or pick up an item might be stuff that’s been done before, but this game stretches those ideas a little bit more than the average adventure might.

The sound design and voice acting overall are stellar too; however, some problems with the recording’s felt like they were reading from a script. That took at some of the immersion out of the game. The house almost feels like it’s breathing and alive, which builds on that creepiness factor in a beneficial way. 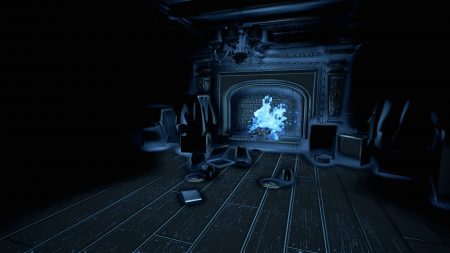 The graphics are dull at times, but the game shines the most in the last two chapters. It’s there that you’ll run into some creepy dolls with guns for hands, so watch out. But I take graphics in a game about a blind person with a grain of salt. Usually, Perception is just completely pitch black. That lack of visuals takes things a step further, showing us what it could be like to truly be blind.

As far as replay value goes, there isn’t none other than continuing from the last save or starting a completely new game which I think is a missed opportunity. They could have incorporated chapter select which would make going back a breeze if you missed something or just wanted to explore parts of the house you didn’t get a chance to.

The team at The Deep End Games knows what they're doing and they certainly have a passion/talent for their work since the creative director, Bill Gardner worked on the BioShock franchise. The ending of the game was brilliant I thought but overall the game had a lot of great ideas that weren't completely developed enough.

Dylan is a writer, gamer, avid movie lover, and PlayStation extraordinaire. Currently, he attends Radford University in pursuit of a BS in Media Studies with a concentration in Journalism. When he’s not writing the next epic post (but you know he is), he plays games like Destiny, Uncharted, Wolfenstein/DOOM/Dishonored; long story short: If I played the game, I liked it; if I haven't played it, just remember that I'm in college.
@Dylanslegos
Previous SDCC 2017: Miles Morales Spidey added to Mezco’s list of Summer exclusives
Next Marvel Heroes Omega lands on Xbox one and PS4