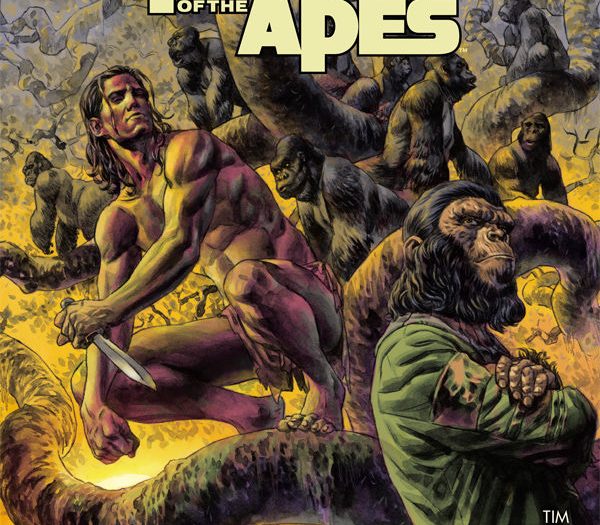 Tarzan on the Planet of the Apes (Trade Paperback) Review

To people who know me at all, hearing about Tarzan on the Planet of the Apes as a comic series came as no surprise as nearly the most exciting news a comic crossover could bring about. The trade paperback, which collects five issues of this glorious crossover, is set to hit shelves in mid-May.

The premise of TotPotA is a simple one. When Cornelius and Zira escape nuclear destruction at the end of Beneath the Planet of the Apes, they return to the early 1900’s, where the chimps and their son, Milo, join a tribe of gorillas in Africa, led by the great silverback, Kerchak. In the film timeline, they return to the time period in which the film was made. This is a much cooler, if less classic, story. 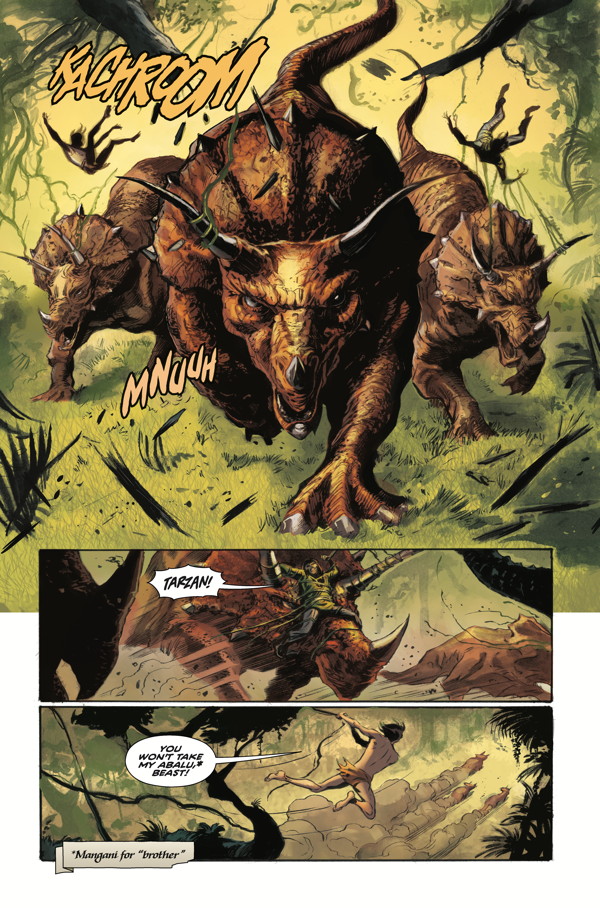 Maybe it wasn’t very great for me to handle the review of this book. I am an avid fan of both Tarzan and the Apes films, both classic and new, so seeing that heavy plot threads are utilized in this cross over was really great to see. Characters from the movie are mentioned pretty specifically and regularly.

The plot lines take place over about 100 years, see Tarzan combating men, PotA apes, dinosaurs and more. He is joined by characters from the PotA universe, and the result is something that we don’t necessarily need, but, I certainly enjoyed.

There are two bits about the plot I had minor issues with. Number one is that the 100 year time jump doesn’t make a whole lot of sense. The only issue is that I am not sure exactly when the jump takes place. Otherwise, time travel as a mechanism for plots involving Cornelius and Zira aren’t exactly new. I just wish the placement were a little more clearly worded so I wasn’t confused about when the time jumps were happening.

The other bit of plot writing I have issue with is the way in that Dr. Zaius is presented. In the original films, he is presented through and through as a religious zealot, unable to view humans with any type of compassion. While this is kind of one dimensional, there is no need for a second villain. In the book, he is presented as being a sort of half villain, and a secondary villain is revealed.

This certainly isn’t bad, and I am sure a lot of people enjoy the more complex psyches in the characters. I liked things the way they used to be, however.

All in all, the plot in this trade book is self contained and a ton of fun, as well. Scenes don’t overstay their welcome, and the action is constantly moving.

It is well worth a read, and I can easily see myself picking up a physical copy of this to add to my Apes and Tarzan collection.

I really enjoyed the writing in the majority of TotPotA. The parts where Tarzan is speaking with actual gorillas are littered with words in the gorilla language.

These add to the immersion and the idea that these characters could actually be real. The only thing I might comment on is that the gorillas and Tarzan speak with some sophistication that a man who grew up among gorillas wouldn’t be able to. Otherwise, the writing matched the tone of the source material, and I really enjoyed reading the dialogue. 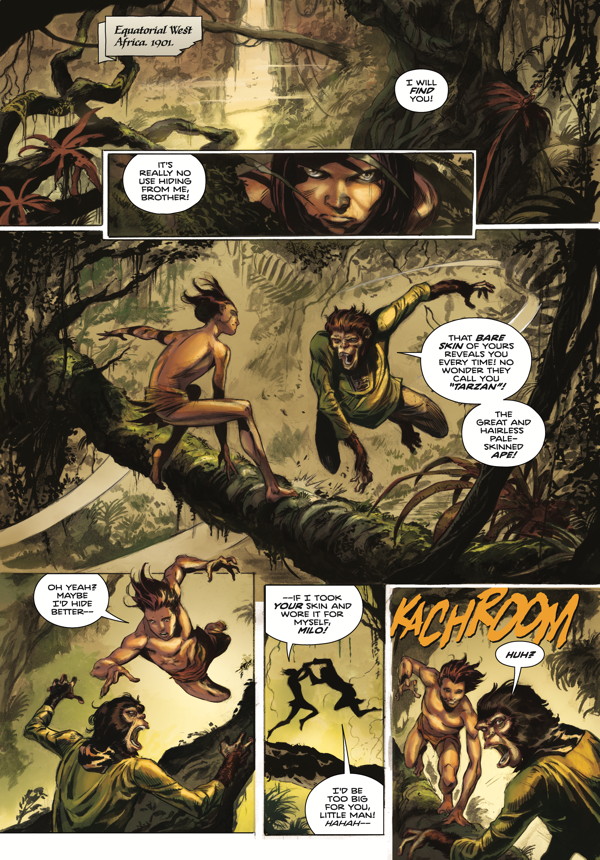 From start to finish, I really enjoyed the artwork throughout TotPotA.

The artists did a great job of making sure that the spirit of the source material was maintained throughout the book. The apes from Planet look  as they should, keeping the aura they exude from the films. The Tarzan characters look just as well.

The only complaint I have about the artwork throughout TotPotA is that at some points, the Planet apes are indestinguishable from eachother. There are certain details that astute fans will be able to pick up on, such as Zira’s hair, but overall, the apes look kind of samey.

This isn’t an issue for the apes from Tarzan. They have strong features such as clothes or different legs to keep them different looking enough.

TotPotA is a great dive for fans of either franchise. As a big fan of both, I absolutely adored this apparent one shot mini series.

The story is fast pace and really does not take long to get moving. Once it does, it doesn’t stop, either. TotPotA is a must buy for fans of either franchise. If you’re a fan of both, this is a true no-brainer.

Tarzan on the Planet of the Apes offers a fantastic dive into a shared universe. Fans of either series should dig buy in as soon as the book becomes available.

Erich was introduced to gaming by his grandfather before he could walk. Since then, he has grown up loving Nintendo and most games in general. He couples his love of videogames with journalism to cover news, provide reviews and tell it how it is in the gaming world.
Previous Resident Evil 7 Spring DLC Delayed
Next Marvel Vs. Capcom: Infinite release date revealed in new trailer

Legendary Comics has a pair of prequel comics on the way for Godzilla vs Kong, …