Ash might be taking on the Evil Dead on TV, but now he’s going to be going head-to-head with the Army of Darkness on the printed page.

Surrounded by evil, low on gas

And, apparently, also not all that… employed. Yeah Ash Williams might not be your typical hero. You know, what with him being a complete idiot and all. Thing is though, he’s also one of the baddest dudes in horror. And he’s been smashing, bashing and otherwise slicing his way through the undead for decades.

This is a franchise that goes way back, but Army of Darkness has hit quite a mark all by itself. The third film in the series, AoD is now 25 years old. And that quarter-century mark is what’s leading into this latest release from Dynamite Comics.

If you’re a fan of Ash, this sounds like everything that you probably love about the character. It’s also coming to you from the writing team of Chad Bowers and Chris Sims, and artist Mauro Vargas.

It certainly sounds like Bowers and Sims are fans, and are looking to kick the new series off in style. 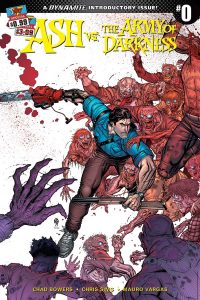 “Army of Darkness, and really Sam Raimi’s entire filmography, is such a major influence on how we approach storytelling,” says co-writer Chad Bowers. “Being turned loose inside that sandbox and having a chance to add to the AOD mythology feels like something we’ve been working toward for years, and hopefully it reads that way, too. And I dare anybody to tell me Ash Williams isn’t the toughest ass-kicker in horror! What he lacks in brains, he more than makes up for by having a chainsaw for a hand. That’ll get you a long way in this world!”

“I saw Army of Darkness when I was nine, and I’ve literally described it as a life-changing experience. It might’ve been the most influential movie I’ve ever watched — in terms of the stories that I like and how much I love smartass everyman heroes that stumble into having to do the right thing — and almost everything I’ve written has had a variation on that idea kicking around in it,” says co-writer Chris Sims. “One of our big goals whenever we sit down to write a new story is to keep things moving fast enough that nobody has a chance to get bored, and with Ash, escalating those situations was so much fun.”

A new era, starting with a low, low S-Mart price

“Chad and Chris bring such vibrant life to their scripts; they translate their own enthusiasm so incredibly to the work, and they are Army of Darkness fans through and through. Teaming them with Mauro Vargas, an exceptional rising star (especially in the realm of hardcore horror), will ensure that longtime fans and curious newcomers are more than satisfied!” says Nick Barrucci, CEO and Publisher of Dynamite Entertainment. “Celebrating AOD’s anniversary with a 99-cent introductory-priced #0 issue is a great way for our retail partners to welcome as many customers as possible to the world of Ash Vs. The Army of Darkness with minimal risk. Put copies on your store shelves and watch as impulse buys ensue — Ash is back, and we couldn’t be happier!”

At .99 USD, it’s kind of a no-brainer to grab this first issue. I mean, it’s less than a buck. Even if you only have a passing interest in Army of Darkness, it might be worth that. Of course, that low price tag also makes it a lot easier to grab all the variants that’ll be out there.

There are five of ’em on the way you know.

Fans should expect to see the standard cover by Nick Bradshaw, first and foremost. After that though, there’ll be five retailer incentive editions for comic shops that order enough copies. Those will include a trio of “Sneak Peek” editions by Reilly Brown, Mauro Vargas, and Pasquale Qualano. Then there’s the cool looking “Blood Red” Line Art cover by Bradshaw as well. And don’t forget the J. Scott Campbell “13th Anniversary Flashback” cover. That one re-presents the very first cover that Dynamite’s AoD line had, way back when they launched the first book in ’04.

Comedy, horror, and a whole lot of action, check out Ash vs The Army of Darkness when it arrives on stands this coming June.

Jason's been knee deep in videogames since he was but a lad. Cutting his teeth on the pixely glory that was the Atari 2600, he's been hack'n'slashing and shoot'em'uping ever since. Mainly an FPS and action guy, Jason enjoys the occasional well crafted title from every genre.
@jason_tas
Previous Cheetah takes on the DCU in new Injustice 2 trailer
Next Marvel releases an X-Men ResurrXion trailer with a very familiar theme