Every story in the Ubisoft’s Assassins Creed universe starts with a similar line. An unsuspecting individual is approached for the purpose of learning more regarding their ancestors. Most of these individuals have no idea of their ancestors’ involvement in the battle between the Assassin’s and the Templars. 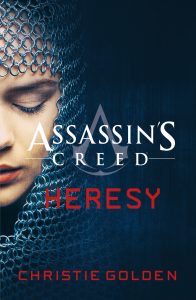 But then we meet Simon Hathaway. Simon is not your typical member in the world of Assassin’s Creed. Simon is employed by Abstergo Industries. For those who may be unaware, Abstergo is a cover agency for the Templars work. Branching into video games and many other aspects of today’s world, Abstergo is an enormous global outfit.

Simon has just earned a position within Abstergo, as the director of the Historical Research division. And like any new promotion, one has to prove themselves to the boss. Simon’s boss Alan Rikkin gives him a daunting task: five days to discover something new regarding a priceless historical artifact. Now, this is not just any historical artifact either: this is the sword wielded by the The Maid of Orléans, Joan of Arc.

Joan had an incredible effect in leading the French, and Rikkin wants to learn more. Rikkin possesses one of several swords used by Joan during her leadership. He wants to know more about it, and if it is a legendary Piece of Eden. If so, why does it not work as it had in the hands of Joan.

If that were not enough pressure to put on a person, add to it the fact that Simon is being brought into the Templars’ Inner Sanctum – a round table consisting of nine of the world’s highest Templars. So the promotion added to joining the Inner Sanctum, means there is a lot riding on Simon’s findings. But once he’s in, Simon’s findings may go against what people know.

Simon obsesses over learning everything he can about his ancestor, Gabriel Laxart, and his time with Joan of Arc. Through his time in the Animus he learns there is more going on than what he, or any of his contemporaries understands. Jacques de Molay is known as  the last Grand Master of the Templar order, and one of the possessors of the sword Simon is tasked with investigating. Through Simon’s investigations he learns that De Molay had a different ideal for what the Templars should have been. Somewhere along the way the idea was perverted, and the group took on a different ideology.

Christie Golden has done a wonder in bringing us into the world of the Templars and Assassins. Joan of Arc had both Templars and Assassins among her in her day, though she knew scarce little of their methods or implications. Joan hears Voices from her saints, which led her hand in her fight. Who these voices really were, and what their intentions were, Joan never truly understood. She simply attributed this to God.

Living in the Animus

Bringing to life a historical icon such as Joan is no small feat. Golden makes you feel like you are in the battle alongside the Maid, as you uncover how the Piece of Eden brings her such unexplainable power. Learn the truth behind this unique Piece of Eden. A weapon, yet in the right hands, capable of being so much more.

Brought to you by Ubisoft, Assassins Creed Heresy is available now.

Story: A fresh take on the Assassin / Templar conflict - 92%

Assassins Creed Heresy starts on the side of the Templars. Though through his trips in the Animus, Simon Hathaway learns more than generations of his predecessors who have come before. Pick up a copy and see where the Templars took a wrong turn!

A fan of media on multiple platforms, I am always watching or playing something! Who knows what I will be on to next?
@mackeyp42
Previous For Honor season pass leaked, similar to Rainbow 6
Next Kingpin #1 (Comics) Preview