Valiant’s Ninjak kicks off a new arc, and brings together the character’s deadliest foes. 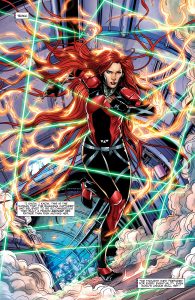 For some reason, I had the totally wrong idea of what Seven Blades was about. That’s the name of the latest story arc to hit Ninjak with issue #23, by the way. The martial arts-themed, spy comic has had a great run to now, though this is something all together different for it. But it’s not something that comic fans in general should be unfamiliar with.

And that’s because Seven Blades teams up six of Ninjak’s foes, forming them into a super-team of villains. Their goal? To kill someone of course, though it’s not clear who in this first issue of the event. Thing is, we actually do know who the target it. It’s a bad guy – a very bad guy. From Valiant’s own previews, it’s pretty clear that the Shadow Seven (catchy name, no?) is hitting Master Darque himself, one of the Valiant U’s major baddies.

But wait, I said “six foes” right? Yep, but there is a seventh, and that’d be Ninjak himself. The Seven, led by arch-baddie Roku, are looking to recruit Colin King to join them in offing Darque while he’s weakened, and before he can return to his true power level. And if you think he’s going to go along with that, then you might be crazy – especially since half the Seven want him deader than dead.

But let’s talk about the script here, because it’s actually pretty great. Writer Matt Kindt had a challenge with issue #23, and that was to ‘explain’ the setup for Seven Blades. It’s never an easy task to write something like this, since explaining things isn’t something that really ever comes off as ‘natural’, in terms of storytelling. It’s usually preferable to write something that flows organically. As a result, explanation stories usually come off as robotic, and feel like they’re talking at you instead of telling a cool story.

That’s still somewhat the case here, as the whole issue is basically Neville Alcott telling Ninjak what happened up to the point of the end of the issue. For some reason though, it works within the context of things. I think part of the reason for that is that this issue packs in tons of stuff. We get to see the UK’s super-secret, super-villain prison for the first time (and explore it with a really cool image), and we get reunited with baddies from past issues, as well as see Roku in action, as she takes down pretty much everybody in her way. 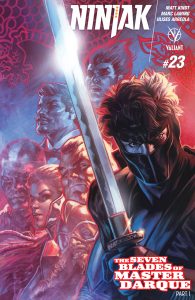 It’s exciting is what it is. And that more than makes up for what’s a necessary evil to get this story moving – explaining.

Marc Laming provided the artwork for this issue, and has done a terrific job of it. The book is loaded up with elements, as I mentioned above, and has a ton of cool moments. Most of it is heavily coated with cyber-techno stuff too, all of which Laming seems to have a ton of fun with. Bottom line, it all looks suitably neat.

Adding to that is the color work, which is stunning. Valiant’s books seem to have a lot of incredibly-colored special effect moments, and Ninjak #23 is no different. It’s fantastic from its singeing flames to its roiling acid, with a couple of glistening laser beams mixed in for good measure. The whole issue is a treat for the eyes, and plenty of fun to read.

Things end up with a cliffhanger too, one that promises an explosive start to issue #24. I assume that’s when things get really rolling on Seven Blades of Master Darque, and I won’t be missing it.

Getting things started on Seven Blades

Explosive art is worth the price - 90%

Issue #23 of Ninjak isn't something that's an instant classic, but it's a necessary lead-in for a storyline that seems to heading in all the right directions. Master Darque and six super-baddies standing in his way, should prove ample opposition for Ninjak, who'll be in for quite the ride when next month's issue #24 opens. This is also a great jumping on point, which half the intent from publisher Valiant, so if you're new to their universe, then I doubly recommend picking up Ninjak #23.

Jason's been knee deep in videogames since he was but a lad. Cutting his teeth on the pixely glory that was the Atari 2600, he's been hack'n'slashing and shoot'em'uping ever since. Mainly an FPS and action guy, Jason enjoys the occasional well crafted title from every genre.
@jason_tas
Previous Nikkei Predicts Under $250 Price for Nintendo Switch
Next Beam up Icon Heroes classic Trek two pack later this month