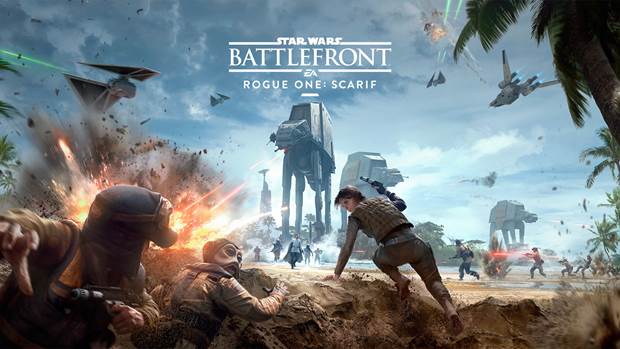 Get a look at Scarif in new Star Wars Battlefront trailer

Hit the beach, and dodge a few AT-ACTs in this trailer for the Scarif mission for Star Wars: Battlefront.

Tying right into the Rouge One: A Star Wars Story film, this is one map pack that’s been pretty hotly anticipated. And that’s saying a lot since EA and DICE have added in quite a bit in a year. Battlefront has grown substantially since its release last Fall, adding maps based on The Force Awakens and classic locales like Tatooine and Bespin.

This is the last of the add-ons, and it’s a pretty big one, stretching the game’s life between two films. Not that Star Wars Battlefront is specifically about either one, but it’s effectively tied into both The Force Awakens and Rogue One. That’s pretty impressive.

It’s a chunky download too, adding in four new maps and two new heroes. Yes, you’ll get to play as both Jyn Erso and Orson Krennic. And those Shoretroopers and Death Troopers look mighty cool out there.

There’s another inclusion here too though, and it’s one that few have mentioned. And I mean space battles. Finally, the Rogue One mission allows you to fight in space, then transition to the planet’s surface. That’s a first for the new game (though it was present in the legacy titles), and maybe a peek at what’s to come in the assumed sequel.

December 6th is the date to mark for Season Pass holders. That’s when you’ll be able to add this pack onto your copy of the game.

Jason's been knee deep in videogames since he was but a lad. Cutting his teeth on the pixely glory that was the Atari 2600, he's been hack'n'slashing and shoot'em'uping ever since. Mainly an FPS and action guy, Jason enjoys the occasional well crafted title from every genre.
@jason_tas
Previous Tom Cruise’s Mummy film emerges from its crypt
Next The Dwarves (PC) Review