Sharpen your axe and fill your gut with beer.

Everyone knows who Dwarves are, from the proud warriors of Tolken, to the lovable idiots of Dwarf Fortress. They’ve been an iconic part of fantasy for decades. The Dwarves is a game that focuses heavily on the short, bearded warriors and blacksmiths. The question is this. In a world where Dwarves have been tackled by hundreds, if not thousands of different works, does the Dwarves stick out?

The Dwarves is an action RPG with a heavy focus on a handful of heroes fighting against massive hordes. It is set in the fictional world of Girdlegard, where a weakening barrier is all that stands between it and the dark lands beyond. Tungdil, an orphaned Dwarf raised by humans, gets caught up in the middle of an invasion and must fight his way through, with his friends by his side. Along the way, he has to deal with politics, ancient ruins, and though choices. 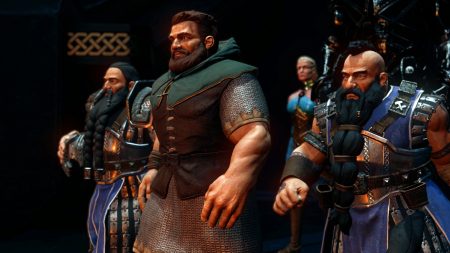 How Does it Play?

Gameplay is mainly split between three sections. Battle, overworld travel, and scenes where you investigate. Battle makes up the core of the gameplay, and is the main attraction. Using an overhead control scheme with elements of real time strategy. This includes the ability to pause the game and give orders to your heroes while you have time to think. Heroes can automatically attack, but in order to carry the day, players need to make careful use of their abilities. Powerful moves that can change the tide of battle, and send multiple enemies flying.

The overworld sections are the second most prevalent part of the game. It uses a board game like approach, with each space moved taking a day. For each hero you have in your party, you use a provision for a day. You can stock up on provisions in towns, but gold is so plentiful you’ll most likely always be well supplied. There are plenty of non-optional towns and roaming armies on the map, giving people plenty to do.

Finally, the investigation sections. These are easily the most threadbare of the three, not having much to them. You walk around a nonactive area, looking for things to interact with. Occasionally, you may be asked to solve a puzzle of some sort, but there isn’t much more to it than that. These areas are mainly used to continue the story. This gives you plenty to listen to, but not a whole lot to do. 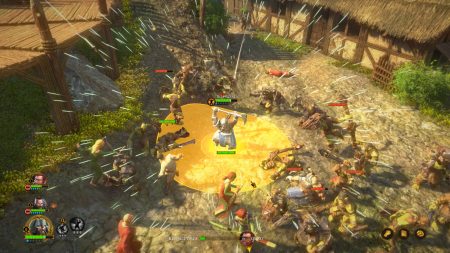 There’s something inherently enjoyable about fighting against massive armies with only a few warriors. Simply seeing their numbers dwindle is a sure fire way to induce enjoyment. The abilities help a great deal on this front. Initially, heroes have the same abilities, but as more join, more variety shows up. One particularly satisfying ability involves an orb of magic that pulls enemies in before it explodes. That being said, regardless of which abilities are used, they all usually end with enemies being thrown back with a good portion of their health gone. It’s quite cathartic. Add that with a variety of objectives in each battle, and the game manages to keep you changing tactics.

The overworld actually adds a fair bit of fun to the game as well. Mainly due to the fact that it enables players to have a level of agency when it comes to the game. There is always a destination that the player should be heading towards, but there’s plenty of side activities to keep them busy. Maybe they want to stop by to help a town that’s under siege, or maybe they should keep going. It’s all up to the players to decide.

The investigation bits can be a bit of a drag though. There simply isn’t much to do there, and it can be frustrating to run around looking for the objects that can be examined. This is balanced out by the fact that they don’t last that long, but they’re still rather frustrating.

Story is a big part of The Dwarves, as it is based off of a novel of the same name. It does quite a bit to immerse the player in the world of Girdlegard, and does a rather good job of it too. Despite starting off with the player knowing next to nothing about this world, The Dwarves manages to convey the majority of its exposition in a contained and digestible way. It does draw on quite a few fantasy tropes and cliches, but it changes enough to make its own style. 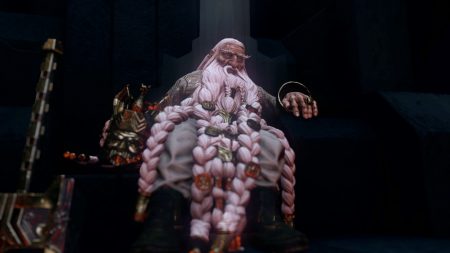 Characters are just as important as the world, and The Dwarves has a rather good cast on its hands. None of them are particularly complex, but they’re well rounded and fairly charming. There’s a good deal of them and they manage to have chemistry amongst each other. Particularly when the naive Tungdil is interacting with the more weathered characters.

Tungdil himself is fairly endearing, and acts as a good audience surrogate. He is well educated, but he hasn’t seen much of the outside world. He’s learning more and more about it as we do, but at the same time he has a base understanding of it. Combine that with his education leading to some funny moments with less educated Dwarves, and you have a likable main character.

The Dwarves is not a bad game, but it is a game with a fair bit of problems. First and foremost, it does something I feel far too many fantasy stories do. Constantly throwing in hard to pronounce and remember terms in order to world build. Names like Nod’Onn and Lot-Ionan, flood the story, making the world feel more complex than it has to be. It’s frustrating because there are clearly more simple ways to build a fantasy world. Referring to the various Dwarf kingdoms by Firstling, Secondling, Thirdling or the dark lands as Perished Lands is far more effective. Although the game is based on novels, so the developers had little choice here.

There’s more than that though, as the combat can be a little frustrating at time. Enemies can be too stuffed together and it can be a hassle to try and figure out where your heroes are. It gets even worse when friendly fire is a thing. Combine that with how hard the fighting can be, with enemies constantly chipping away at your health and you sometimes losing if a single hero dies, occasionally when you do it by accident, you may be playing some missions multiple times. Growing frustrated as you do. 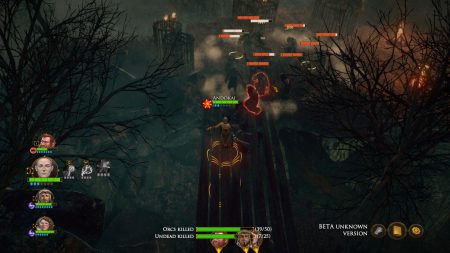 On top of that, the game is a little clunky. In regards to the gameplay front, you sometimes have difficulty getting heroes to go where you want. On the story front, the cutscenes feel rather off. If they don’t frequently cut back and forth between animated and being still, they have some snags. Such as some animation errors, or background NPCs glitching. All of these are fairly noticeable problems that add up.

The Dwarves is a good game, but it’s not a great game when it could’ve been. The combat is satisfying, but it is often brought down by clunky controls, frustration and confusion. The end result is that there’s fun to have, but you have to pull through to get to it.

The story isn’t Tolken levels of quality, but it is well crafted and enjoyable. I wish that there were easier to remember names and that it did a little more different, but that’s a nitpick.  What’s not so much of a nitpick is the slightly jerky method in which the story is conveyed.  It’s an enjoyable story, but there are tiny moments that pull you out of the moment.

All in all, The Dwarves is a decently put together game. The only question that needs to be asked is if you think a game like that is worth the price of admission.

Rough Around the Edges, but Solid

The Dwarves has quite a few problems, but still provides a solid core experience and story for those who are interested.

A recent college graduate and life long gamer, David is now working as a freelance journalist.
Previous Get a look at Scarif in new Star Wars Battlefront trailer
Next Wall to wall Gibs! Strafe is coming to PS4