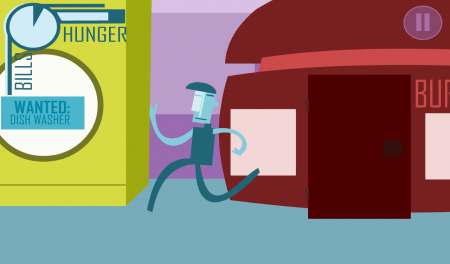 Crap! I’m Broke: Out of Pocket  is a hilarious life management sim that puts you in the shoes of, well, yourself! You recently moved out of your parents home and are now living alone. One great thing though, is that your parents agreed to pay for the first three months of your rent! Aren’t they the best? These 3 months serve as your tutorial to the game. You learn how your “Bills” and “Hunger” gauges work and you also learn how to “play” your first set of jobs. These jobs being a dishwasher and a grill cook at a fast food joint. Once those three months are up though… you are officially on your own. You are an adult and can take care of yourself but the game has some twists for you along the way.

The art of the game is also pretty fantastic. It has this cubist art style that makes it feel like you are playing in a Picasso painting. The colors and palettes are simple but not offensive on the eyes. I found myself just pausing the game or letting the meter run out just so I can see the small details in the character and scenic art. Overall, it’s a slick looking game and doesn’t bombard you with flashing images or strong colors. They are kept light, simple and yet complex and unique. Loved the art. 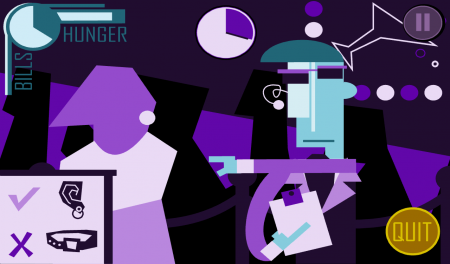 Once you grabs the reins, you can fall into some serious debt… IF you aren’t careful.

The way Crap! gauges your time is by your “Bills” and “Hunger” meters. As your time progresses and you work the jobs available to you, you must be sure that you remain well fed so you can perform your jobs and get the cash you need to pay off your debt. If you don’t feed yourself, you will die. Seriously, you’ll die. The lower your hunger meter gets, you begin to see an apparition of Death following you wherever you go. Keep an eye on those meters.

The jobs can range from dishwasher, to bouncer to even a street performer and all jobs have their own unique controls. They play like mini games with a small timer while you perform as quickly as you can to amass the most money possible. There are also “Employee of the Month” opportunities where completing the goal at hand will net you a nice sum of money. Fail… and you get nothing. Serious business ya’ll.

If you pay your “Bills” before the meter runs out, your month is over and any extra time will be saved so you can unlock mini-games from the mini-games menu. Hopefully, you performed very well at your odd jobs. You pay your bills and then you move on to the next month; so the game can move fairly quickly. I went through about a year in roughly 7 or 8 minutes, though, I was a pretty quick learner.

If for any reason you did not pay your bills on time, you would get an eviction notice and end up with last months bill as debt. Not paying your bills on time makes making more money increasingly difficult and gave me the same sense of dread that I would feel when I forget to pay my bills in real life (great simulation! EEK!) Neglect to make enough money to get you back in the green and you will eventually be evicted from your apartment, though, you can be saved by repossessing some items you may have accrued from the market place. This will buy you another month but beware, as every new month approaches, you receive emails with unexpected bills. Some of the unexpected expenses can range from a lost cell phone, a water filter breaking, or messing up your clothes and needing to buy new ones. To be fair, not all emails are bad as you can also win money for contests you may have won, among other things. 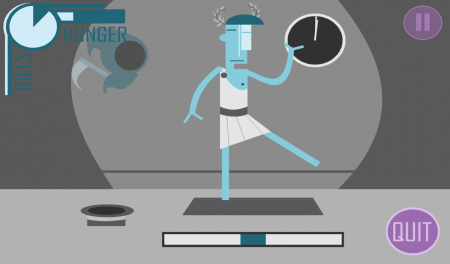 Overall, Crap! I’m Broke: Out of Pocket is a light-hearted and easily addicting game to jump into. The games are easy to pickup and have very simple instructions. The more you play, the easier the game becomes as you start to learn what power-ups to buy to get the most bang out of your buck. The only issue I had with the game was the “Quit” button being SO darn close to the area of screen where I have to play. This was especially annoying during the Burger Flipping Job and the Can Sorting Job where I would be playing my “Employee of the Month” round and my finger would slide over the Quit button and kick me out of the job earning me nothing. This would be extremely frustrating as a misstep like that would cost me the month and eventually, my life. Besides this one design flaw, the game is absolutely worth playing and I highly recommend for anyone who likes mini-games for their quick fix.

Crap! I’m Broke: Out of Pocket

Reality was never so dark... or fun!

Overall, this game is highly addictive and VERY fun. While there were minor issues, they were not enough to ruin the overall experience of the game. Loads of fun for those small open moments of time in your schedule.

I am an avid gamer and have been since a wee cub. I cut my teeth on fighting androids in the year 20XX (Mega Man), stomping on Goomba's (Mario Bros.) and taking a punch to the face (Street Fighter II Turbo). I still play to this day and am a MAJOR adventure gamer. Single player games are my bread and butter; this is where I spend most of my time, though I have been known to pour a ridiculous amount of hours on Destiny. Damn you, Bungie!!! I love all games from pixelated to Unreal Engine smoothness.
Previous Dark Horse preps two big launches for Alien Day 2017
Next Pokemon Sun and Pokemon Moon Demo Impessions