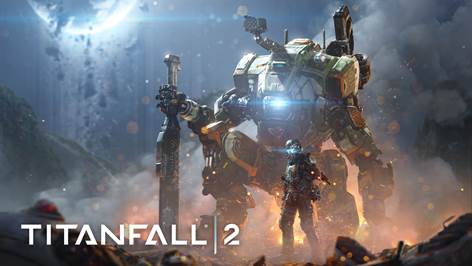 The Titan called BT and Jack Cooper might not have been meant to team up, but that’s just what happens in Titanfall 2’s campaign.

Still looking pretty sharp is Titanfall’s first single-player mode. Fresh from the vault at EA, DICE’s campaign seems like it hits all the marks as far as solo action goes. And of course, it’s got plenty of the Titanfall flavor that made the first game so intriguing.

Piloting the big mech and going it on-foot action look to be in about equal share too, which is interesting. The appeal of the Titans is obvious, but EA has really played up the ability to fight outside of BT, in more traditional FPS setting. I say “traditional”, but honestly Titanfall’s gameplay looks pretty unique even without the mech. I don’t think there are too many other FPS’ out there that have you moving as fast as Titanfall 2. Or wall-running quite this much for that matter. Mirror’s Edge jumps to mind and that’s about it.

Not too far off at this point, Titanfall 2 hits the Xbox One, PS4, and PC on October 28th. Want to read more about the new solo play? Click here for the development blog on the game.

Jason's been knee deep in videogames since he was but a lad. Cutting his teeth on the pixely glory that was the Atari 2600, he's been hack'n'slashing and shoot'em'uping ever since. Mainly an FPS and action guy, Jason enjoys the occasional well crafted title from every genre.
@jason_tas
Previous Mignola Returns With More Hellboy in 2017
Next Dark Horse preps two big launches for Alien Day 2017