Marvel Absolutely Everything You Need to Know (Book) Review

DK’s latest fills Marvel fans in on Absolutely Everything You Need to Know about the publisher’s universe. And when they say ‘everything’, they mean it.

Everything you ever wanted to know about Marvel Comics, but were afraid to ask

I haven’t been following along with one of publisher DK’s latest series’ of books. From what I see from Marvel Absolutely Everything You Need to Know though, it seems like it’s just as good as their usual fair. DK has a great history already with books like this, after ll. They’ve made dozens of encyclopedic volumes that focus in on one character and then explores them with vigor.

The books are usually filled to the brim with content. Almost overflowing with all the info that fans could want or need. Expanding on that, there are larger ones as well that go deep into stuff like the Star Wars, DC, and Marvel universes at large.

As for this particular book, well, it does all that and then some. And if you consider yourself a Marvel super-fan, then you’re in for a potential shock if you thumb through Marvel Absolutely Everything You Need to Know. I say that because you’re almost assured to find more than a few things that you flat-out didn’t know. 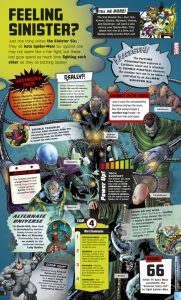 Right down to the smallest detail

As you can see from the image above, every page is loaded. This thing is packed with content, more so than any other book I’ve had the pleasure of reading from DK… Actually, make that from any publisher. I’m used to encyclopedias that offer lots of detail, but this is at the very top end of that scale.

You might not see it right away from the sample images either, but there is a format to the book. Almost every entry from Doc Ock to Doc Strange has a list of top factoids about the character in question, random facts about character deaths and misfortunes, goofy things that you might not believe are real, and plenty more.

For example, the Spider-Man pages have the Top 3 versions of Spider-Man, a Tell Me More section about spider-sense, a Between the Panels blurb (about Spidey being relatable), and plenty more. And of course, there’s a sector with all the vital stats on old Pete, including his strengths and weaknesses, allies and enemies.

The book contains lots more than just character profiles though.

Characters are just the focus of chapter one, but but book rolls on from there with ‘Teams’, ‘Locations’, ‘Science and Magic’, ‘Key Events’, and a thrilling Index. And each one of those chapters has just as much, if not more, information shoveled onto its pages.

Spy Soldiers for instance, is just two pages long, but has listings for SHIELD, Phil Coulson, Deathlok and more. In the Teams chapter, you’ll find info on groups like the Sinister Six, the X-Men (yes, they’re in here), and the FF (yes, they’re here too). But you’ll also be able to dug up little known facts on teams like MI-13, The Legion of Monsters, and the Lethal Legion.

If all of this sounds really cool, that’s because it is. I’ve been a Marvel Comics fan since the 80s and I know a ton of stuff about the publisher’s fictional universe, but there’s plenty here for even me to enjoy. It’s just a ridiculously deep trip through one of the biggest and longest running universes in pretty much any medium. Quite frankly, it must have been a feat and a half to assemble. Maybe that’s why it took a team of three to put together. 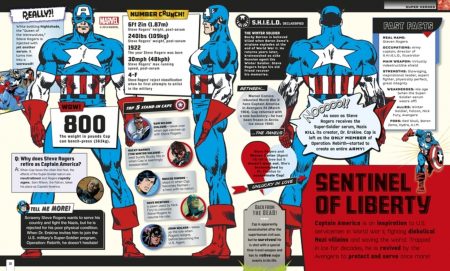 Of arc reactors and adamantium

Adam Bray, Lorraine Cink, and John Sazaklis know their stuff, and that’s probably putting it mildly. The three are the minds behind Marvel Absolutely Everything You Need to Know, and they’ve done a fantastic job here. As I mentioned above, the book goes deep on just about every hero and villain that you can think of. And does so in style.

The press release says that they aimed for a ‘comic book’-type layout for the book’s pages and it comes across. Each page is laid out in a shockingly orderly manner. One that’s easy to follow despite being so encumbered with info.

They should know what they’re doing though, given their backgrounds. Bray has crafted tomes like this before. He worked on DK’s Star Wars line, while Cink is a web-host for Marvel Comics itself and expert in all things House of Ideas. As for Sazaklis, he’s just a best selling author, Spider-Man illustrator, and worked with MAD Magazine. You know, no biggie.

Lavishly illustrated in the Marvel style

Being that this is a book about Marvel Comics, you might be wondering about the art. Well, it’s awesome, but as usual with a book like this, it’s not original. Now, I realize that to have original artwork created for this kind of project would be a monumental effort, but I think it’s worth pointing out.

That’s not to say that there isn’t fun to be had in the visuals here though. Quite the opposite actually.

Inside Marvel Absolutely Everything You Need to Know you’ll find work from some of the greatest artists of all time, all laid out next to the facts and blurbs and features that accompany every entry. Again, the book has a nice flow to it, that had to have been hard to pull off. 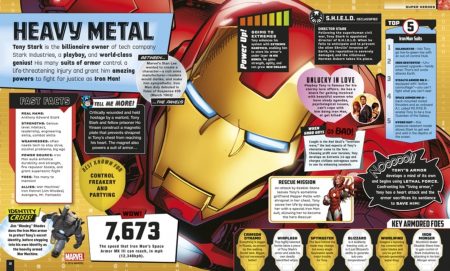 Even so though, there is one thing that I didn’t really care for. Before each section, there’s no index. Yes, I know I said there was one earlier in the article, but that’s the problem. There’s one index, and it’s at the rear of the book, Table of Contents style. This isn’t the end of the world by any stretch, but it’s a little bit aggravating for something as loaded as this.

If I flip to the Teams section, I want to be able to simply read what teams are in its pages and then head to the one of my choosing. Instead I have to go to the back go the book and look it up alphabetically in one big list. It’s a little annoying. It’s not super-horrible, and it doesn’t ruin the experience, but it’s annoying nonetheless.

Still though, If I had to get that nitpicky to find something wrong with this one, well that should tell you something.

Absolutely Everything You Need to Know

If you're a Marvel fan, then this is a book that you need to see. Marvel Absolutely Everything That You Need to Know is impressive in its scope and depth, fully stocked with volumes of info, all in one neat little 239 page book. I may have preferred that there have been indices before each chapter, but that's a minor quibble, and about all that this book is wanting for. For $19.99 USD, it's almost a must-buy if you're a Marvel nut.

Jason's been knee deep in videogames since he was but a lad. Cutting his teeth on the pixely glory that was the Atari 2600, he's been hack'n'slashing and shoot'em'uping ever since. Mainly an FPS and action guy, Jason enjoys the occasional well crafted title from every genre.
@jason_tas
Previous The Last Guardian gets hit with another delay
Next Unbox (PC) Review