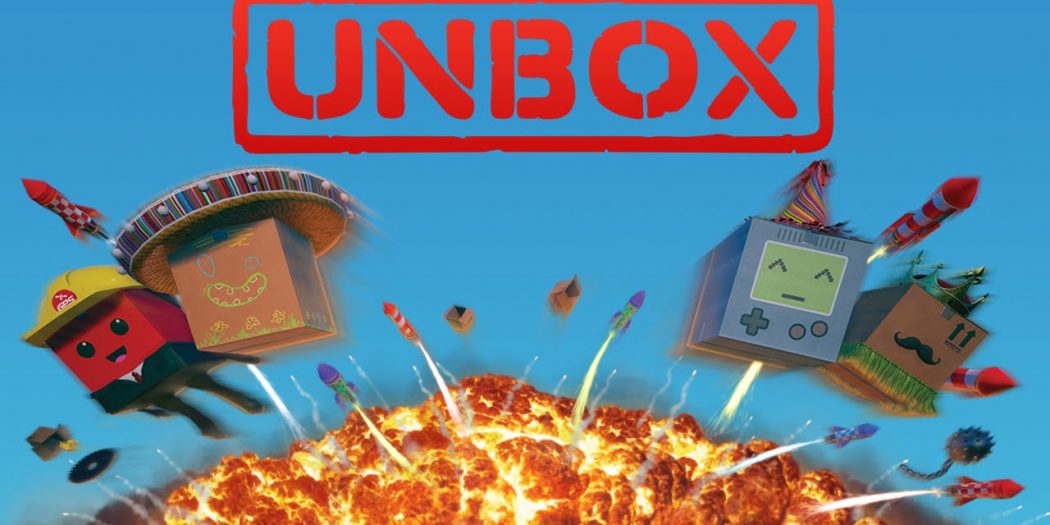 There was a time back in ol’ 2015. I remember the day clearly. I was aimlessly wandering around Eurogamer’s indie section, not looking for anything in particular. 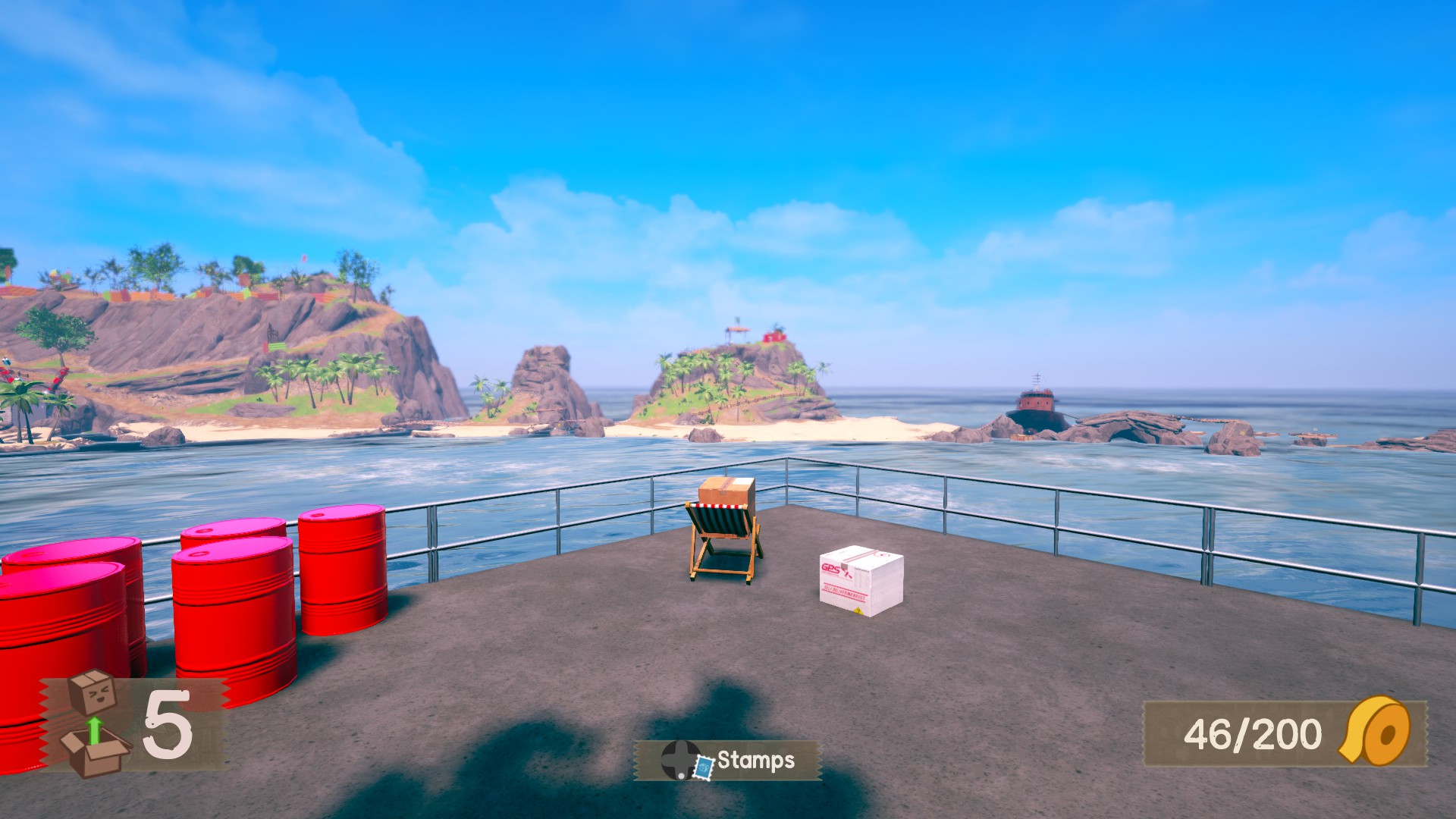 Just reading titles and looking at screens waiting for something new to jump out, grab me and scream in my face. As luck would have it, this happened with a little bundle of joy going by the name of Unbox. As soon as I saw those little boxes rolling around a colourful landscape I just had to get my hands on it. I played for all of five minutes and immediately needed it.

Unbox is a very welcome return to 3D platforming. A genre that has been long forgotten and the developer Prospect have brought it back to life beautifully. From the large palette of bright colours, to the cheerful, upbeat music, to the very charm of each and every box.

You play as Newbie, a newly created cardboard box of the Global Postal Service which has created sentient, self-delivering boxes. Your mission is to take down the first sentient box made called Boss Wild and his stylishly dressed box entourage The Wild Cards.

As fun and charming as this game is it does fall a little short in the ways of story. It feels a lot like a Triple A sandbox game where you spend 80% of your game time doing the same side missions over and over and play very few campaign missions, except the side missions are 100% of the game here. The main aim is to take down Boss Wild. To do this you have to collect enough stamps in each location to unlock a boss fight in that location. To unlock stamps you have to complete challenges across the map. This can all get a little repetitive after a couple of hours but I didn’t find myself resenting the game like I usually do.

During Triple A titles I’m always left with a sour taste after playing them because the only thing I can remember from them is spending all my time doing the same three side missions for the entirety of the game. There is something about this game that kept my eyes glued to it. It could’ve been the look of the game, the humour, or just that it’s so different from everything that’s being pushed out recently.

From the get go it feels like you move way too fast for something with only right angles, which takes some adjusting to. More than once did I roll too close to an edge and only just manage to catch myself. The only time you seem to lose speed is when going uphill or climbing stairs, that seems to slow you right down. Well, as much as expected given the fact that you are indeed a box and again, only have right angles. But it’s nothing a jump or two can’t fix and then you’ll be back on your merry way. 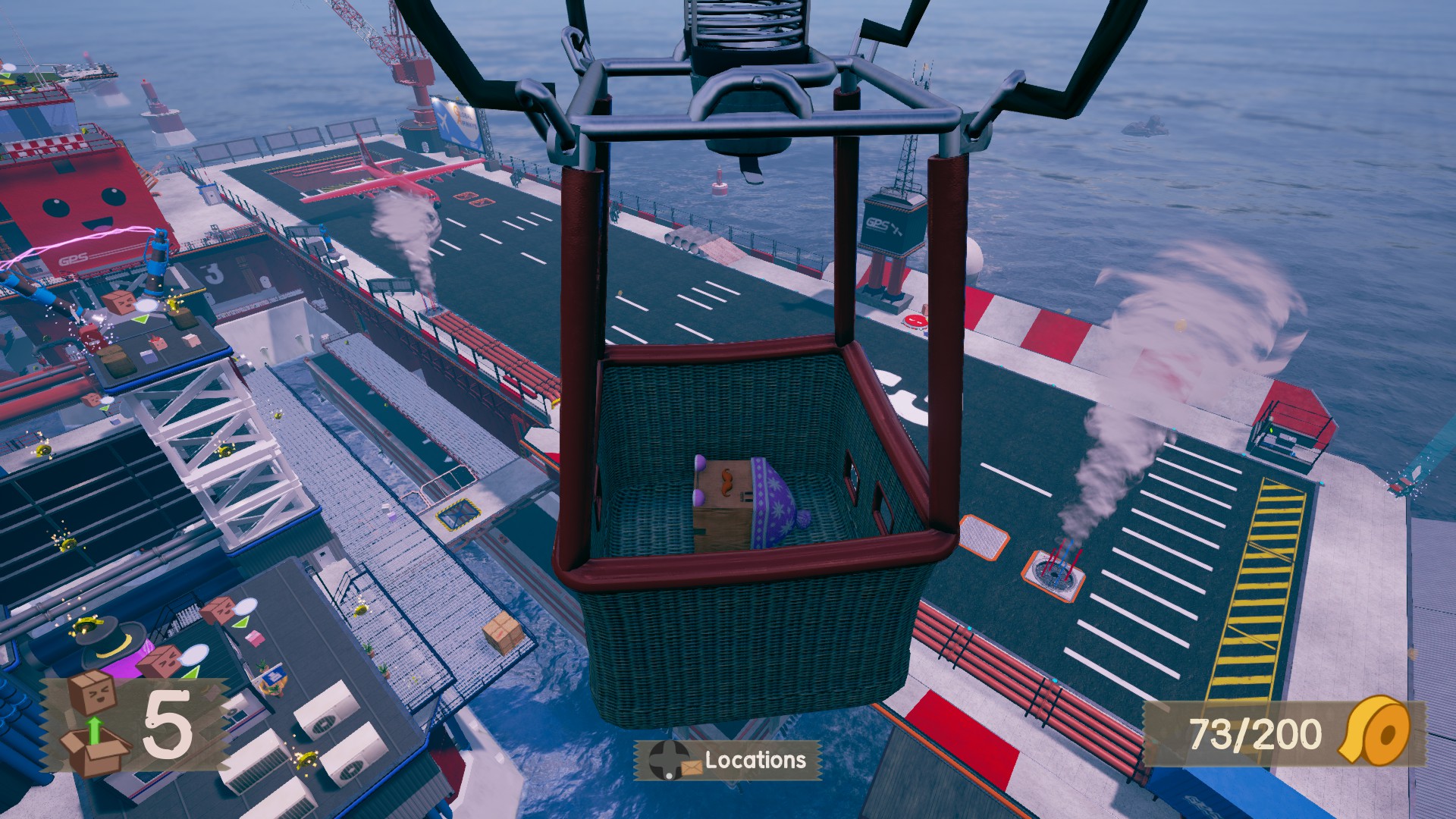 Something which always feels weird to say, especially praise, is how the box moves. Grab the closest box to you. Now kick it across the room. Go ahead, I’ll wait…That’s exactly how the box moves in game. Just like that. It truly is such a joy to watch, assuming you’re as simple minded as I.

An extremely useful feature, which is really the whole theme of the game, is unboxing. This is basically double jumping. Or in this case sextuple jumping. This has come in handy, and saved my box more than enough times. Fall off an edge during a race? Need to cross a large distance? Rolling away from a giant enemy box and need to escape? No problem, just simply unbox and all your troubles wither away.

The control scheme took a little of getting used to, what with jumping being the right trigger, unboxing being the left, and shooting being A. Many times did I press A to jump and fell into water or off a ledge. You can change the control scheme in the options but that doesn’t change the on screen prompts which also cause confusion so you’ll probably find yourself sticking with the default controls. But other than that it’s very simple and easy to use.

Graphically this game looks wonderful. Sure, It has its rough edges and isn’t photo-realistic. But it has something so much more important than realistic visuals. It has heart and soul. It’s the type 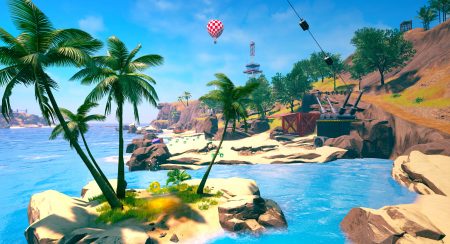 of world you can enter and it will instantly lift your mood with the brightly coloured scenery alone. One thing that came as quite a shock was the explosions. I was expecting something rather cartoony when you shoot a firework at another box but instead was met with an impressive looking explosion. This still fit the style of the game and looked great, it was just unexpected. Although realistic graphics would’ve made this game even funnier, the graphic style it has completely suits the mood and setting of the game.

Split-screen multiplayer has been missing from games for far, far too long and it’s such a welcome return to have it again in my life. Especially four player split-screen which I haven’t seen in years. 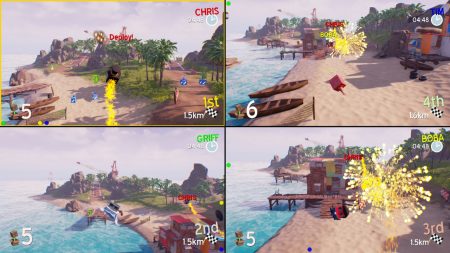 The multiplayer offers a fair amount of game modes and maps. There’s enough here to keep you and some friends entertained for a good few hours. With only two players it’s not as fun as it could be. A bot mode or an option to have bots would fix this. Even with four players, having extra boxes rolling around would make it a lot more enjoyable. You can have a tournament and play through each game mode and map or free play it and play as you like. A grand addition to the rest of the game.

Fun but Lacking in Story

A rainbow in a grey and brown world

Although lacking in actual story and missions I would say this is still worth picking up. It looks and feels brilliant and brings back platforming in a beautiful way. The campaign is the games main downfall here as it is repetitive and can get a bit stale. If you’re happy playing the same game but with a different title then carry on, if by any chance you fancy a change from all the dark and gloomy realistic games and want to try something new then I would recommend Unbox.

Massive game and movie enthusiast. In any free time I'm always playing something or watching something. I didn't choose the hermit life.
Previous Marvel Absolutely Everything You Need to Know (Book) Review
Next Bethesda outlines incoming free Doom update