The darker side of fairy tales

We as a species have accumulated so much media and stories over the years that it seems to be common to find new versions that try and put new spins on previous ones. Be it different settings, alternate angles or a different tone. The Huntsman: The Winter’s Curse, goes for the third option. It takes a classic concept, that of fairly tales, and tries to tell a much darker story. The question is, does it succeed?

The Huntsman: Winter’s Curse takes place in a fantasy world that feels like a dark reflection of a fairy tale.  The framing device is even one being told.  There are goblins, elves, dwarves, evil witches and heroes who fight them. But it’s a very bleak world where settlements are at risk, banditry is frequent, and there is a hostile invasion from the north. To make matters worse, magic exists and originates from an evil source, corrupting those who use it. It’s a brutal world, but it’s the one Elisabeth wants to see more of. 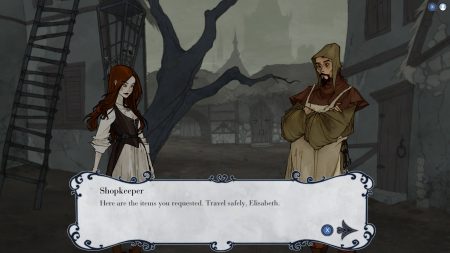 The story has interesting ideas, quite a few. Elisabeth is searching for her four lost brothers, and it quickly becomes clear that they have fallen prey to the Enchantress.

She’s a powerful witch who seems to be the source of all human based magic in this story. Elizabeth’s brothers have been corrupted into inhuman animals and she must fight them, despite trying to save them.

Her dramatic foil is Marcus, a former servant of the Enchantress who escaped her clutches. He and Elisabeth have radically different viewpoints on the matter of fighting the Enchantress. Elisabeth wants to save her brothers, while Marcus believes that they are beyond saving and is more concerned about Elisabeth’s safety. This and other points serves as a massive part of the story and gives the two strong stances on morality, informing us of their characters.

The Huntsman: Winter’s Curse uses downright beautiful artwork for its visuals. Drawn visuals that appear with slightly exaggerated features that work well with the fairy tale approach. Evil soldiers are large and bulky, Elisabeth is thin and beautiful, and random townspeople have a rugged look to them.

It truly works best with the non-human enemies. The wolves for example, are massive, hulking beasts that look like they crawled out of someone’s nightmare. Ready to gobble up Little Red Riding Hood. 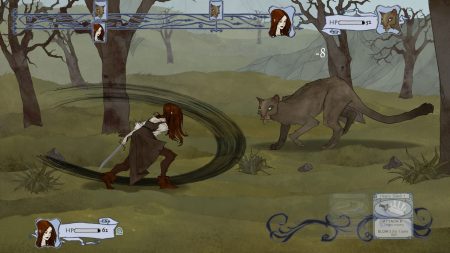 The environments are just as good, although a little less varied. A bright green meadow is teaming with life, while a more sinister looking forest has horrifically twisted trees. It strikes a unique balance.

Being exaggerated enough to know that it is fantasy, but close enough to reality that you can forget about it for a moment as you look at it. In short, this game’s appearance is easily the strongest aspect.

The gameplay centers around turn based RPG combat, Final Fantasy style. In an odd twist, each characters movements are decided via the use of cards and decks. Equipment decides the makeup of each deck, adding cards to it when equipped. Leveling up allows a point to be spent on a limited skill tree, part of which allows more cards to be held in the player’s hand.

Turn order is a significant part of the game. A bar at the top of the combat screen shows which character will go first, and this bar can be altered. Buffs can move markers on the bar forward, while debuffs can move them back.

This creates a fair bit of a metagame as you try to balance two different tasks to maximize effectiveness. Reducing the enemy’s health to zero, along with maintaining control of the battlefield. 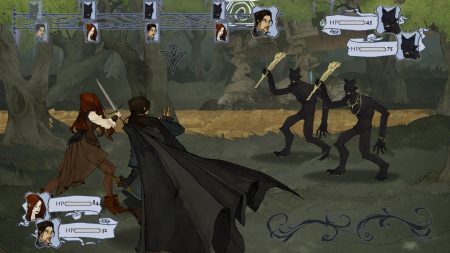 Despite the good set up, the story does get rather bogged down with a myriad of flaws. While Marcus and Elisabeth’s differing viewpoints are a good place to work from, the game never really does much beyond that.

They just constantly go over the same points again and again, rarely with new arguments and just as rarely with new wording. In a game that isn’t particularly long and is heavy on story, the player will notice something like this and get bored fast.

Sadly, the world of The Huntsman: Winter’s Curse is criminally underdeveloped. We simply never learn much about it, or what is going on in it. Elisabeth and Marcus’ quest is focused purely on defeating the Enchantress.

The invading queen from the north, who is flat out said to be more powerful than the Enchantress, is treated more as a background event. Even the ‘Huntsman’ that the game is named after barely has a role. You wonder why he’s even there.

We never learn about offenses or defense being mounted against the invasion, or even who rules the land Elisabeth lives in. We never learn much about the characters outside of the two main heroes. It makes one feel like Elisabeth and Marcus have their priorities backwards, and as if only a small, insignificant part of the world is being covered. 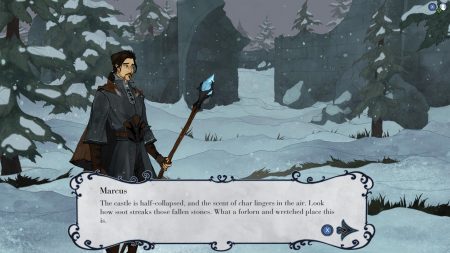 Even in the tunnel vision of the main characters, there are still gaps. Elisabeth’s brothers are the driving force for her, yet we only learn the very basic aspects of their personalities. The Enchantress doesn’t have much in the way of personality or motives, other than generically wanting power.

There is simply not much in this game’s story to work with. The only real development is between the two leads, and as mentioned before, that gets repetitive.

The biggest problem with the combat is that its rather run of the mill. You and the enemies keep taking turns until one side dies. There’s not much in the way of variety, and the fights are usually rather easy. Sadly this is all the gameplay the game has to offer, and it forces you into fight after fight. Sometimes barely thirty seconds after the last one has taken place.

Even more interesting combat systems would get tiring after being used multiple times without interesting story progression between installments. The majority of side quests don’t seem to understand this and are the worst offenders. Nearly every last one is about the characters ignoring the main story to get into another fight. The ones that aren’t are merely short story segments. It simply isn’t fun to fight again and again.

The aforementioned turn bar does play its role, but not as heavily as one might imagine. Early on it takes several status effects to push a character far enough along it in order to make a difference. The exception is if the move is dedicated purely to the status effect, and if that happens the turn feels wasted. Even if you won an extra turn, it feels like that turn is simple taking the place of the one just used. In short, the combat feels tedious and unsatisfying 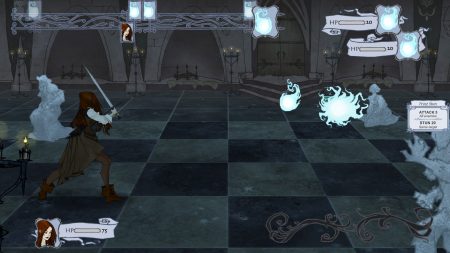 And just to put the final nail in the coffin, the game is quite buggy when I played it on the PS4. Marcus leaves Elisabeth at one point due to her being angry at him, a key part of the story. He later returns, something the game emphasizes by saying he had rejoined the party. For me, however, Marcus continued to show up in battle despite Elisabeth talking about how she had proved he hadn’t needed him afterward.

What’s more, the game constantly skipped to the end of cutscenes for me, usually at the worst moments. The worst instance was when Elisabeth was trying to defend one of her brothers from the spirits of the Enchantress. Just after the last one approached her, the cutscene suddenly ended and thrust me into the next part of the game. Radical developments had taken place that would serve as new tension between Elisabeth and Marcus for a good part of the game. Developments that I had missed.

And for some reason the game has multiple instances of riddles and mazes. The riddles are passable (If only because the answers are multiple choices) and the mazes simply annoying.

The Huntsman: Winter’s Curse, is a bit of a let down. While it has amazing artwork and a promising start, it quickly goes downhill. The story doesn’t have much to offer and comes down with a bad case of ‘second verse, same as the first’. The combat is basic, without much to offer, and becomes frustrating as time goes on. All in all, there’s little to this game outside of its visuals. It just isn’t worth the time.

It is, however, in episodic format with the first episode being free. Those who are interested in the game will be able to experiment with it to see if the above do not bother them.

The Huntsman: The Winter’s Curse is available on PC, Mac, and PS4

The Huntsman: the Winter's Curse has a lot of heart put into it, but sadly the game itself is uninteresting and repetitive.