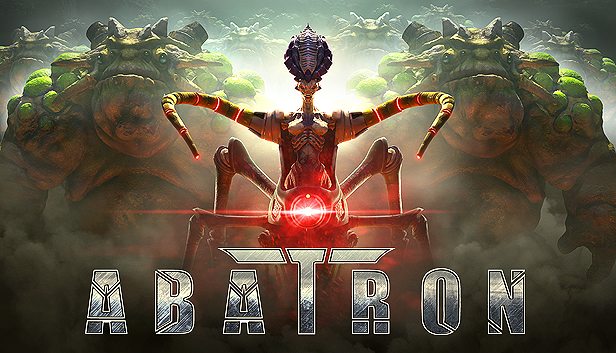 It’s always fascinating to watch a developer explore uncharted territory. To see brand new ideas be put into action, games spring up around them, and the landscape of the medium grow. Abatron is one of these games. It is currently in a stage of extremely early alpha which has just entered closed testing. The hopeful new game also has a Kickstarter planned. Not one that is currently up, but will be very soon.

Developed by W3 Studios, Abatron is a hybrid of real time strategies and first person shooters. The majority of the game is spent with typical real time strategy gameplay, but with the ability to take over one of your units. W3 Studios claims that they plan to make playing from a pure RTS or pure FPS standpoint equally possible. A daunting prospect, but not one that is impossible. 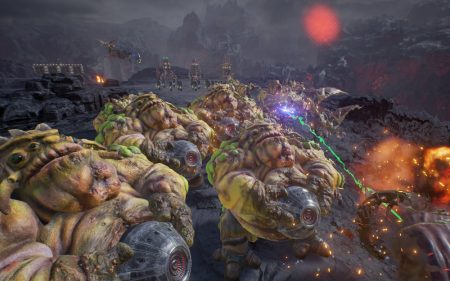 Abatron has a unique design concept. Unlike most RTSs, which focus on organized armies for the most part, Abatron focuses on very inhuman creatures. The melee unit is a clawed creature, the ranged unit a deformed cyborg, and the tank a four legged slug like creature. Combined with the multi-colored and downright alien buildings, some of them looking partially organic, Abatron has a strong look. A one of a kind world.

While Abatron has an interesting concept, it also has problems. Quite a few problems. First and foremost, for a real time strategy it is remarkably bare bones. I’m aware that it plans to launch a kickstarter and that the game is in a very early stage of development, but even then there is very little to it. As of the time of writing, there are only four units, one of them being a worker unit. This does not change from faction to faction, even apprence wise. With the limited types of units and fighting methods, there is very little actual strategy involved in fighting. There is no way to outsmart your enemy or to counter their approach. Victory goes to whoever showed up to fight with more firepower. 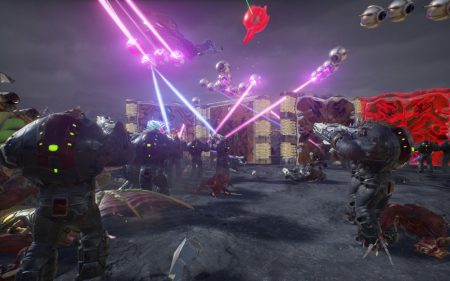 The base building is no more complicated than that the combat. There are three different types of resources and only five nodes can be built to gather them. Choosing which node to dedicate to each resource is the only variety in base building. Aside from nodes, the only things you can build are defensive walls and the handful of buildings used to recruit your limited units. Base building feels very much like going through the motions and following a preset path. There’s no variety to it, no method and no spark of excitement

These two combine to create a real time strategy game that feels overly simplistic and small. There’s no variance to the battles, all the factions feel the same, there’s no micromanaging to do. All you can do is rush units and then throw them at the enemy. It’s in a state that you honestly feel like shows you everything it has to offer in under an hour.

What about the FPS aspects?

The ability to take over a unit on the battlefield is an idea with potential. To the game’s credit, it does not make the soldier you control an expendable piece of canon fodder. When you take over a unit, it effectively becomes a hero unit, complete with unique abilities. Abilities that allow it to attack large groups of enemies and make the 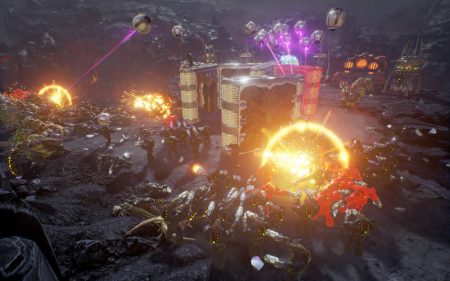 However, the controlled unit cannot win the battle by itself and still dies at the same rate as other units. It feels like it could turn the tide of a close fight, but little else. While its attacks can hit scores of enemies, it does not deal a massive amount of damage. This makes sense to a degree. It would be poor design in a RTS for one unit to be able to wipe out entire armies. Particularly for one that plans on having multiplayer, but Abatron goes too far in the other direction. The controlled unit isn’t too powerful, but it feels as if it isn’t powerful enough now.

One last issue is that controlling a unit feels a little stiff and stilted. There’s not much to say on this subject other than that. Shooting at hordes of enemies that don’t react that well to you and have massive amounts of health isn’t very fun. It feels tedious and stretches out for far too long. The lack of impact your weapons have doesn’t improve the matter at all. It just feels like you’re chipping away at an iceberg with a pickax.

I don’t want to dismiss Abatron outright, as it is a game I would love to see succeed. There is potentia 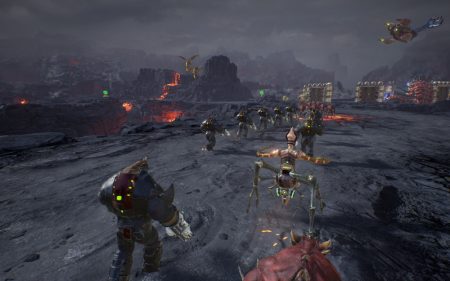 l in a RTS game where you can take over a friendly unit. But it needs to be fleshed out, and attached to a strong base game. This early in development, it is fully possible for everything to change for the better. The developers have made it clear that they do intend to add more units, and perhaps they should add another one or two to their plans. They need enough to make the battlefield feel alive. For it to not be immediately obvious what approach the enemy will try. The same goes for buildings. Finally, and arguably most importantly, the controlled unit needs to be able to make a difference. Without dominating the battlefield.

My heart goes out to W3 Studios. They are clearly very excited about this game, and I hope that they can pull out all the stops.

A recent college graduate and life long gamer, David is now working as a freelance journalist.
Previous The Witcher 3: Wild Hunt GotY hits next week
Next Playstation Now hits the PC in the UK