Prometheus #2 does a number of strong things to make the reader interested from the very beginning, and keep them hooked through the end of the book and beyond.

Now, full disclosure here: I have never been a huge fan of Alien or Predator, but reading through the second part of four in the Prometheus mini series from Dark Horse has given rise to an ambition in me to seek out all of the films I have not yet seen (let alone the comic series) and experience the full story from the horse’s mouth. 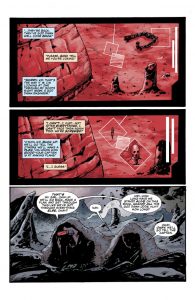 Starting up, we meet two apparently humanoid figures taking shelter on what looks like a cliff. There is a brief discussion about the spacecraft they see crash land in front of them. Something comes off of the ship, and the two recon members seem terrified of the “engineer.” Immediately after, a squad of humans evacuates the wreckage. Largely, the rest of the book follows this squad as they attempt to set up camp on the hostile planet.

Throughout the rest of the issue, we learn certain things about the characters from the human squad from the wreckage. They seem to be a pretty balanced group of people, with different people having different interests and goals, even in the unwelcoming face of surviving on a desolate(???) planet. We learn about the relationships the members have with each other, some platonic, and others maybe not so much. It is nice to see that the human element isn’t lost while trying to create a tense situation.

By the end of the book, there is some admittedly predictable problems for the squad of heroes, and the book ends with a mind blowing revelation for, I assume, everyone who knows anything about the Aliens universe.

Writing as a plot device:

Of course writing is there to fulfill the plot. The writing in the second issue of Prometheus did what I wanted it to. From what I have seen of the Alien films, it definitely was in line with the way I expected characters to interact. These subtle intricacies are nailed down to the facial expressions the characters exert when dealing with..er..threats.

Aside from saying that the feel of the writing fit the overall theme of the book, I really don’t have much else to say. The book wasn’t clogged with obtuse wording or unnecessary description. It felt good to read. 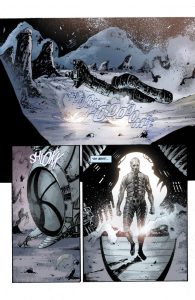 The art in Prometheus #2 is strong. There are a lot of grays, browns, and dark tones. Seeing as though it is, in its essence, an Aliens comic, I would never dream of faulting this book for not being colorful. The almost dirty aesthetic works in the narrative that is being provided.

Throughout the book, I was constantly intrigued by the art style. Different panels that represent different things such as views through high tech visors do the job admirably. \

It is important to note that the art stlye is gritty, but not wholly realistic. The environments take on a stylized view and truly evoke the emotions of the story.

The one place to fault the art style lies in the fact that every dialogue scene looks like it could take place on the same ridge, even when the squad fans out to explore. This is really only a nitpick though, and didn’t bother me as I was reading through the book.

More history for the Aliens universe:

Overall, Prometheus #2 is a fun ride through the Aliens universe. I enjoyed learning things I didn’t know about the universe and meeting people in the universe that I didn’t recognize. The book also has a number of surprises to keep even avid fans surprised. After reading Prometheus, I will be avidly looking for the continuing Aliens comics from Dark Horse.

Prometheus brings tension to the Aliens universe in a way that only makes me more and more interested in the established history and story.

Erich was introduced to gaming by his grandfather before he could walk. Since then, he has grown up loving Nintendo and most games in general. He couples his love of videogames with journalism to cover news, provide reviews and tell it how it is in the gaming world.
Previous 4001 A.D. Shadowman #1 (Comics) Review
Next Xbox Live Games with Gold announcement for July