BPRD #142: An interesting issue that ends quickly and rather abruptly. 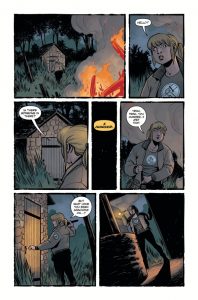 BPRD Hell on Earth #142 begins with resident exorcist, Ashley Stroud, coming into contact with a shack that is housing some kind of demon. I found this piece of the story rather interesting as our protagonist was led to a creature who’s face is in a constant state of morphing between a human-like form, a bull head and a goats head. It was great seeing the demon’s form change from panel to panel as it really gave you a feel as to how the change in its features were constant. In this issue, artist Mike Norton does a fantastic job. The attention to detail in his art is great to see, especially in Ashley’s facial expressions, which Norton shows her emote amazingly well. The ambiance is set and, visually, this was a very good issue. Let’s move on to the rest though.

BPRD Hell on Earth #142 is obviously the final act in an on going series of Ashley’s adventure in trying to find out why children have been going missing in this mysterious ghost town. With this issue being the finale of this specific mission, it ended rather quickly and without any real kind of build up. Ashley spends the majority of the beginning of the issue just speaking to herself, which I found a little odd. I can understand if the character is doing this out of a feeling of nerves, but nowhere in the issue does she come off as being nervous. I would have preferred to have these solo speaking sections to be more in her mind to herself. Having Ashley speak out loud to herself just seems off and as if it is trying to convey being anxious, which I was not buying. After going into an abandoned well, with no fear or nerves, Ashley eventually comes face to face with the demon responsible for the missing children. We are then treated to a traditional “bad guy spills the beans” back story by the demon as to why he is there, which then quickly shifts to him trying to achieve his evil plan which takes our protagonist by surprise! Oh no! Ashley then does a quick incantation, has a weapon of light, dispatches said demon and moves on. The conclusion literally happens that fast and left me wondering “Clearly, I should not have had anything to worry about her going into this well alone.” If Ashley Stroud is supposed to be some kind of rookie or possibly a screw up in the BPRD… this issue did not showcase that at all. Left me a bit confused. 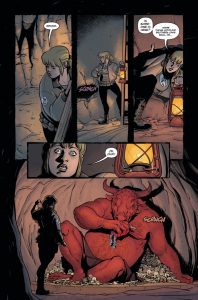 Overall, BPRD Hell on Earth #142 was interesting but the climax and ending happened all too quickly and didn’t give me enough time to worry about the Ashely’s predicament, let alone enjoy the fact that she dispatched the demon with no problems. The issue seemed a little too formulated and the end just too easy. I like to worry about whether my protagonists might make it or not. Leave me wondering if this may be the issue that the writers chose to get rid of said protagonist. Maybe this is the end for them? Surely such a large creature would pose as a threat for our lowly exorcist. But no. She’s a bad ass, knows exactly what to do, gets the demon to do what she wants and then quickly gets rid of him without breaking a sweat. It’s all just handled a little too quick for my taste. I like build up and suspense, not a quick resolution wrapped in a bow.

Overall, the issue is pretty interesting and it's nice to see a female protagonist deal some ass kicking with ease, but it made the issue feel fast and not entirely fleshed out.

I am an avid gamer and have been since a wee cub. I cut my teeth on fighting androids in the year 20XX (Mega Man), stomping on Goomba's (Mario Bros.) and taking a punch to the face (Street Fighter II Turbo). I still play to this day and am a MAJOR adventure gamer. Single player games are my bread and butter; this is where I spend most of my time, though I have been known to pour a ridiculous amount of hours on Destiny. Damn you, Bungie!!! I love all games from pixelated to Unreal Engine smoothness.
Previous Skateboard Party 3 ft. Greg Lutzka (Android) Review
Next Weird Detective #1 (Comic) Review