Batman, Superman, and Wonder Woman just made DC Comics’ trinity a reality not he big screen in Batman v Superman, and now the trio is ready to throw its weight around as… paperweights courtesy of Icon Heroes. 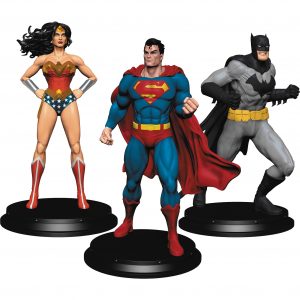 Yes, technically these guys and gal (no Gal Godot-pun intended) are ‘paperweights’, though I can’t imagine that they’d look bad as straight up statues. The three are in the same mold as the popular DC TV character paperweights from IH and look to be just as detailed and accurately sculpted as those, so I’m thinking they’d look right at home next to your collection of DC graphic novels and ‘Ultimate’ editions.

Crafted from resin, all three will stand around 8″ tall and all will cost you $50 USD, which isn’t bad at all for something like this. You can expect them on shelves and at internet retailers this coming September.

Jason's been knee deep in videogames since he was but a lad. Cutting his teeth on the pixely glory that was the Atari 2600, he's been hack'n'slashing and shoot'em'uping ever since. Mainly an FPS and action guy, Jason enjoys the occasional well crafted title from every genre.
@jason_tas
Previous Final Witcher 3 expansion dated and trailer-ed
Next Super Punch-Out!! (SNES) Retro Review