Formerly at home over at McFarlane Toys, Halo is now under the stable of Mattel and they’re running with it for action figures, vehicles, BoomCo roleplay weapons, and more. 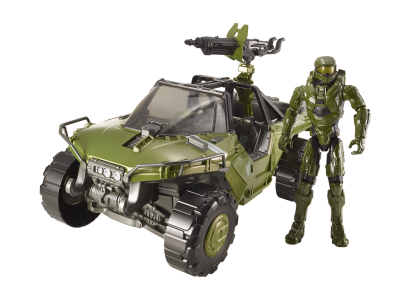 Now, Mattel owns both BoomCo and Mega Bloks, so technically they already had the Halo license before this (just) past Toy Fair of 2016. After all, the Halo BoomCo guns have been out for a few months now and the Mega Bloks building sets have been a thing for years and years.

There were new additions to both lines at Toy Fair to be sure too, but there was much more as well. The Halo action figure license is now Mattel’s too (though I don’t really know what’s happening over at McFarlane) and you better believe there’s a bunch of stuff on the way as a result.

Large and small scale figures will be coming in both the 12″ and 6″ scales and both will have vehicles to accompany them. Yes, both. In fact, that Warthog you see above (with the Chief) is in the 12″ scale, and that probably means that that’s one massive fish-tailer.

As for the figures themselves, they’re pretty much what you’d expect. And by that, I mean there’s lots of Spartans… and an Elite. Despite the selection of characters here, they all look pretty great and it seems like there’s plenty of articulation on them too. Hopefully that bodes well for the future of the license at Mattel.

The figures and everything else is pictured in the gallery below, so scroll on down and have a peek.

Jason's been knee deep in videogames since he was but a lad. Cutting his teeth on the pixely glory that was the Atari 2600, he's been hack'n'slashing and shoot'em'uping ever since. Mainly an FPS and action guy, Jason enjoys the occasional well crafted title from every genre.
@jason_tas
Previous Toy Fair 2016: Pops, Playmobil crossover figures and more at Funko
Next Toy Fair 2016: Tamashii loads up with huge licenses