Apocalypse Wars is a mega-event launching in Marvel’s X-Men books this Summer, but the title villain isn’t stopping there, as his shadow will fall across a mess of variant covers as well. 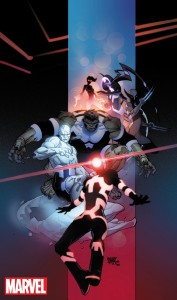 People are really starting to dig variant covers again. It reminds me to the 90s… in a good way. And to that end, you’ll be seeing a lot more of Apocalypse this Summer than you had imagined. Sure he’ll be starring in the X-Men: Apocalypse movie, and will have the Apocalypse Wars crossover event running in Marvel’s mutant line of comics, but he’ll be pretty much everywhere else in the Marvel U as well.

While those looks pretty great and all, there’s even more to come, as the following titles will bear the mark of En Sabah Nur as well. These next books an the ones that appear above will all appear throughout May, so it’s going to be a big month for the X-universe. Kind of makes you wonder if Marvel and Fox (the motion picture license holder for X-Men) might be coming to some kind of accord…

Anyway, here’s what else will be getting in on the variant fun:

Jason's been knee deep in videogames since he was but a lad. Cutting his teeth on the pixely glory that was the Atari 2600, he's been hack'n'slashing and shoot'em'uping ever since. Mainly an FPS and action guy, Jason enjoys the occasional well crafted title from every genre.
@jason_tas
Previous Toys to Life genre busts loose in 2015 with huge growth
Next What’s dangerous in the world of The Flame in the Flood? Everything.