Bluefin and Tamashii Nations unleash the Boba Fett the Ronin

The latest in the Meisho Movie Realization Star Wars series of figures from distributor Bluefin and Tamashii Nations, Boba Fett is a masterless samurai in their latest reimagining. 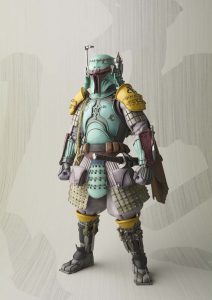 We’ve already seen Darth Vader and a Stormtrooper released as a part of this series, which re-casts the characters from a Galaxy Far, Far Away as warriors from ancient Japan. Quite frankly, they’re pretty darn awesome, and now we’re getting the best-looking one yet with Boba Fett.

Fett is decked out in period-inspired armor (from feudal Japan), that nonetheless reflects his look in the original Star Wars films. This version of course, isn’t an installer bounty hunter, but a masterless samurai – a ronin. Pretty fitting for Boba Fett.

Designed by artists Takeyuki Takeya and Junichi Taniguchi, Ronin Boba Fett stands 6 and 3/4 inches tall and includes all the accessories that you’d expect to see with a figure of the character, including his signature blaster and missile pack. The kick though, is that all this stuff is also tailored to the time period on Earth, so that pistol is of the flint-lock variety, not the laser-shooting kind.

He’s also not alone, as a second version of Darth Vader is set to arrive soon as well. Both figures will run you about $89.99 USD each with Ronin Boba Fett becoming available now or very soon from online storefronts, and Darth Vader hitting in January. You can see some more shots of Boba in action in the gallery below, and read up on some more of the figure’s specifics (as well as see what’s included with Vader).

Jason's been knee deep in videogames since he was but a lad. Cutting his teeth on the pixely glory that was the Atari 2600, he's been hack'n'slashing and shoot'em'uping ever since. Mainly an FPS and action guy, Jason enjoys the occasional well crafted title from every genre.
@jason_tas
Previous Ubisoft announces release dates for more Assassin’s Creed Chronicles
Next Until Dawn (PS4) Review