Capcom’s tome for the classic Devil May Cry franchise impresses, even extends into the anime series. 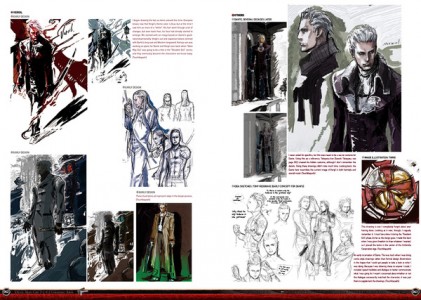 Like many others, I spent my fair share of hours trekking through the baddies of at least the DMC universe. However, somewhere along the way, I’ve missed an entry or two. Journey with me as we take a look at some of styles and decisions the team at Capcom chose.

Devil May Cry has been delighting fans since it’s release in late 2001. Four video game installments, five books and comics, even an animated series and an iPhone port. It is safe to say that there has to be a few fans of the demon hunter Dante out there. Seven years to bring publish four fully fleshed titles while working against hardware restraints could not have been an easy task!

Dante, a paranormal investigator, a mercenary, a demon hunter, is also half demon. How many times have video games been able to pull off a character that is part demon, that you actually want to return to? More than once? Devil May Cry’s Dante starts off running his demon-hunting business, also named Devil May Cry. From there, you and your new friend Trish enter a dark and twisted world. Over the course of the games, you will face all forms of unholy creatures, long lost family (evil twin brother and a demon father.)  You even have the opportunity to transform into a partial demon during gameplay yourself! 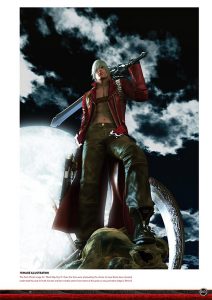 224 pages of illustrations, comments of development and even some unseen characters and locations. Devil May Cry seemed to release a new title every two years, with the fourth title taking a three year development cycle. For those who are less familiar with the franchise, this book’s commentary will tell readers that Devil May Cry started off as a sequel to another hit series. Pay attention to the outlandish enemies, and I’m sure you could hazard a guess easily enough.

The developers discuss things such as platform limitations, and the effects they had on the final products. In this image, Dante was not planned to be without a shirt. You get the sense that some of the team attached to the Devil May Cry project really had to learn as they went while growing with the popularity of the project.

The material for the games is presented in the order of DMC3, DMC(1), DMC4, DMC2. This represents the chronological timeline of the series. Follow along as you learn more about the designs of Dante, Lady, Trish, and their host of warped challengers. Each chapter presents a summary of the storyline for that game, as well as sketches, concept art, notes on alternative styles or decisions that were made at the time. Notes including such things as explanations to why designers and marketing should work together when publishing material, rather then bringing designers at the end of the marketing process. See what decisions were made to keep Dante from appearing with transparent skin.

Lastly, the publishers have gone back and gotten in touch with four of the people responsible for these games. Enjoy reading their interviews as they discuss what made Trish’s character so difficult, or who did not want to include a jumping ability in-game. Finally, see diagrams that were used when collaborating with other games such as Viewtiful Joe and SNK vs Capcom.

Honestly, when I got a copy of Devil May Cry 3 1 4 2 Graphic Arts, my first thought was ‘I haven’t played those in forever. It’ll be good to see where they went with it.”  I had no idea. I was unaware of where the franchise started, though looking back, it is not a stretch. That other franchise (I wont spoil it here) has been one of my favorite series to keep track of.

When I saw the page count at 224, and covering four games plus additional material, I was skeptical. I figured something would have to be left out. Skimp out on something. Truth be told, I got more than I expected.Well fleshed-out character drawings, animation notes. Descriptions of how weapons worked. Things you expect to see when you sit down in an art team meeting, discussing who will handle each part of the project. Add to that the concept art for backgrounds and additional characters that were left out of production. There was even some storyboards included before the first game changed titles.

Whether you were like me, and played some Devil May Cry, but it has been a while, or your a die-hard who has all the games, the books and everything in between, I doubt you will be disappointed with this one.

This review was based upon a digital copy of Devil May Cry 3 1 4 2 Graphic Arts supplied to Brutal Gamer by Capcom.

A fan of media on multiple platforms, I am always watching or playing something! Who knows what I will be on to next?
@mackeyp42
Previous First Captain America: Civil War trailer arrives, is incredible
Next Pokemon Picross Releases December 3rd