The classic horror book starring the xenomorphs of Alien movie fame is back and all wrapped up in Collector’s Edition packaging. 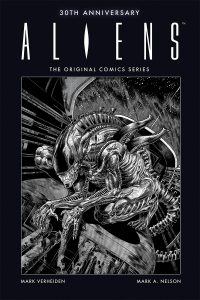 First appearing on comic shop racks (there was no digital back then) in 1988, Aliens was a landmark book from Dark Horse Comics. The title, by Mark A. Nelson and Mark Verheiden, was a fan’s dream in that it continued the film series on in an appropriate fashion, compared with what actually appeared in the movie series later on. So, in other words, Hicks is alive and in the thick of things.

In deep space, a salvage crew is attacked by seemingly unstoppable monsters. The marines are called in, but they need someone with experience. Soon Hicks (the horribly scarred survivor from Aliens) and Newt (now almost eighteen) find themselves on a mission to locate and destroy the aliens’ homeworld!

Sound awesome? It was. And now you’ll get the chance to read it first hand if you missed out way back in the 80s. Thanks to Dark Horse and Twentieth Century Fox Consumer Products, this new collector’s edition runs a chunky 184 uncut and unabridged pages.

Showcasing all the black and white glory of the original books, Aliens 30th Anniversary: The Original Comics Series is set to hit stores this coming April 26th. and yes, you can preorder a copy for yourself right now.

Jason's been knee deep in videogames since he was but a lad. Cutting his teeth on the pixely glory that was the Atari 2600, he's been hack'n'slashing and shoot'em'uping ever since. Mainly an FPS and action guy, Jason enjoys the occasional well crafted title from every genre.
@jason_tas
Previous Super Star Wars makes the trench run on the PSN
Next Nintendo loads up on Holiday deals for Black Friday