Nintendo loads up on Holiday deals for Black Friday

Black Friday is almost here (it’s actually next Friday), and Nintendo has a bevy of deals to get gamers thinking that the Wii U and 3DS are the ways to go this Holiday. 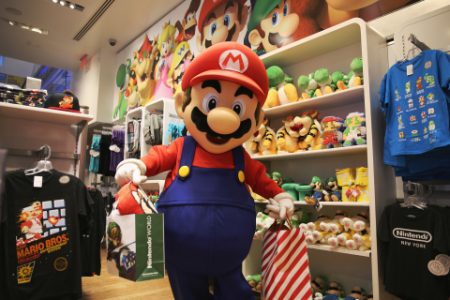 “Fun is more affordable than ever. Whether you’re a Nintendo fan or shopping for one this holiday season, these excellent deals provide fun game experiences for the whole family,” said Scott Moffitt, Nintendo of America’s Executive Vice President of Sales & Marketing. “These great offers on Wii U, Nintendo 3DS and a large number of games represent an incredible value for people who want to make their holiday shopping dollars go as far as possible.”

Value is a factor here for sure, but so are some of the best games out there at the moment. For a pair of systems that’ve might have an impending successor (we have no idea what it is yet really) on the horizon in the Nintendo NX, Nintendo’s current crop of consoles actually have a fair bit of fight left in them and some excellent games to play that shouldn’t be missed.

And the company plans on taking full advantage of that with Black Friday deals on games, bundles, and even Amiibo. Here’s what to get and where to get it: 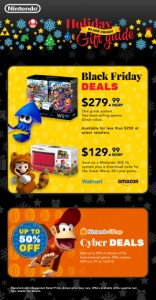 Suggested retail price of $279.99 at major retailers, available at Target and Walmart for less than $250

Save $20 off the suggested retail price of $199.99 at Best Buy, Target, Toys R Us, GameStop and Walmart.com

Bundle with a download code for the Super Mario 3D Land game at a suggested retail price of $129.99 at Amazon.com, $129 at Walmart

Select Wii U Games at Walmart for $25

Gamers can treat themselves to a gift and save up to 50 percent on dozens of the best-reviewed games for the Wii U console and Nintendo 3DS family of systems. Prices start under $5, so it’s easy to add even more fun to your holiday season. This sale runs from Nov. 25 at 9 a.m. PT to Dec. 2 at 8:59 a.m. PT, and the full list of titles will be available at http://happyholidays.nintendo.com/cyber-deals.

Jason's been knee deep in videogames since he was but a lad. Cutting his teeth on the pixely glory that was the Atari 2600, he's been hack'n'slashing and shoot'em'uping ever since. Mainly an FPS and action guy, Jason enjoys the occasional well crafted title from every genre.
@jason_tas
Previous Dark Horse Comics’ original Aliens series is back
Next Gods of Egypt posters and trailer arrive