Spoiler alert: Fallout 4 is one of the best games of the year. 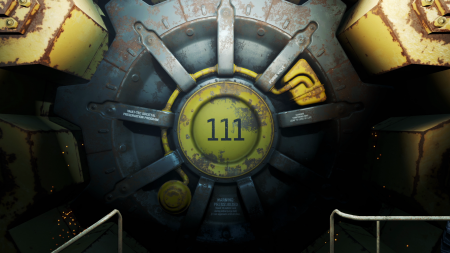 Not to spoil the Game of The Year list we put out every year, but I think, as far as my personal list is concerned, Metal Gear Solid V is going to have a hard time knocking Fallout 4 out of the ring for first place. What that means, simply put, is that Fallout 4 is a fantastic piece of post-apocalyptic art, renewing a stale (albeit amazing) franchise with fresh mechanics, a new setting, and better gunplay than ever before.

Fallout 4 begins where no other Fallout game has before: before the great war, before the dropping of the atom bombs, in a time of peace and the quiet before the storm if you will. You play as… uh. *insert name here* a pre-war everyman (or woman, if you like).

You create yourself in the mirror, with a amazing array of different facial presets, hair, hair color, skin color, nose lengths, and… you know what? Just picture Skyrim’s customization, but with somehow more options. After building your character, you mosey around your house until there is a ring at the front door. 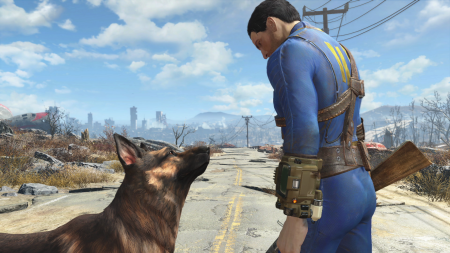 At that door is standing a Vault-Tec representative, who is there to ensure your family a space in Vault 111 (this is where you choose your S.P.E.C.I.A.L. abilities, which I’ll get to in a moment). Your robot servant calls you into your baby son’s room, and your wife soon arrives to help you console the child, named Shaun.

A moment later, sirens go off, and you are told to head toward the Vault, following a crowd of people, mass hysteria ensues and not long after, you leave the world behind to be ravaged by centuries of radiation and bloodshed. Once you’re in the Vault you come to find out that each person has been assigned a cryo-stasis station.

You close your eyes and awaken two hundred years later, only to see your wife murdered and your child stolen by a group of mercenaries; you fall asleep again, and awake an indeterminable amount of time later to a post-nuclear wasteland full of greed, opportunity, death, violence, drugs, and craftable forts that rival that of Minecraft.

But on to why you’re all here reading this: is Fallout 4 good? Yes, it’s amazing. The end. Now, if you want to find out why it’s good, stick around and start reading the rest of this review.

First, let’s start with the perks, not for any… perk-ticular reason (heh.). There are so, so, so many. For each point in your S.P.E.C.I.A.L. skills is a perk unlocked. The perks then get purchased with points earned by each level up. And each perk can be upgraded 2-5 times depending on the perk, and with each point it gains more power. Basically, thank goodness there’s no level cap in Fallout 4 because Heaven knows it’d be impossible to reach 100 percent completion without it. 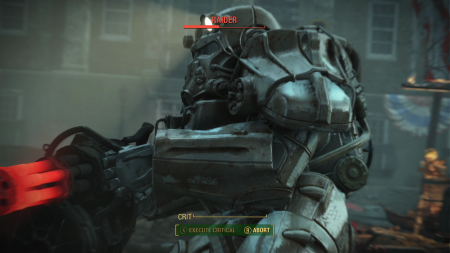 Crafting weapons, buildings, power armor, chems, regular armor, and cooking is incredibly fun, and ensures that all the scrap you collect on your adventure never goes to waste. However the tradeoff for this is that scrap does have weight to it, and more often than not I found myself over-encumbered.

Working with weapons and weapon mods made my day. You can add mods to a shotgun such as a full barrel, or a sawed off barrel, or a stock, or a simple handle if you so desire. I had a 10mm gun I picked up at the beginning of my playthrough, which I added a little bit to each time I could, and now I have an incredibly damaging gun with a silenced barrel for extra stealthy options.

Power armor crafting feels like working on a car, and it really instills nearly the same amount of pride. There are six models of power armor that I recall, each one better than the last, and each limb of the armor can be infused with some kind of upgrade, from extra damaging hands to a headlamp that looks like the Vault Boy. The suit can also be painted with certain designs, and each design has a bonus to it as well, such as charisma or stealth bonuses. 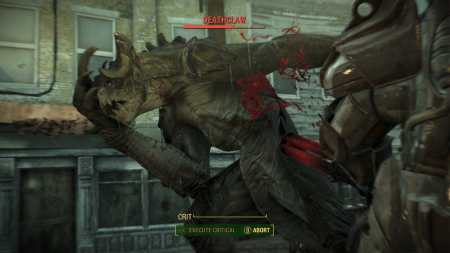 Regular armor crafting is good as well, though in all honesty I kind of had to force myself to use it. That’s because anything you pick up just “lying around”, on people unfortunate enough to not be important to the story, can really keep you just as protected as something you can make at a crafting bench. For a while anyway. Once you get some points into that particular perk, the upgrades do get better and much more useful.

Chem crafting works the exact same way as potion crafting in Fallout, if perhaps a little less complicated, only because every recipe is shown to you from the beginning of the game (unless there are some secret recipes I don’t know about).

By far the biggest new addition to the Fallout franchise though, is the ability to own a settlement, and not just one, but many. If you’ve been playing Fallout Shelter in these last few months leading up to release, you have a pretty good idea of what you’re going to be doing. Managing food, water, overall happiness, and even recruiting people to your settlement via a radio tower.

However, how you do all this in Fallout 4 is admittedly less in-depth than Fallout Shelter though, strangely enough. Each person gets one food, one bed, and one water, so as long as you check back from time to time and plant another ‘food’ or make another bed, everything should go down smoothly. Beyond that though, all of the fun comes from the crafting, in my humble opinion. 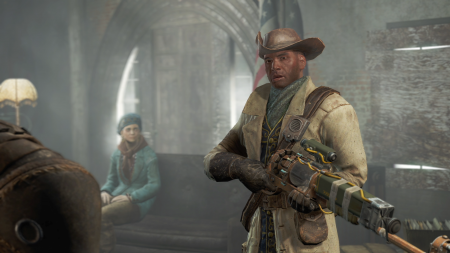 Crafting buildings for a settlement boils down to what I said earlier: a post-nuclear war Minecraft. Once you get enough materials (which are really easy to obtain, by the way), you can begin building houses, and the only thing limiting your imagination are some stupid immovable objects.

By the way, if you’ve seen any advertising at all for the game, you’ve probably seen the light blocks advertised, they don’t come as a default building option, but fear not! As a reward to all the readers who’ve stayed reading this long, you can find the magazine that teaches you how to craft them in a hardware store near Diamond City (the main city of the game) it’s upstairs behind a locked door, but just mess around in there for a little while and you’re bound to find it.

Not everything is perfect with Fallout 4 however. And though I haven’t run across more than one, the only true glitch I’ve experience with the game is actually quite a nasty one sadly. Thing is, no one else seems to be having the issue.

I’m playing the game on Xbox One, and for some reason there have been a few times where my guns have disappeared and I wasn’t able to draw them again or fire them, and I had to reload to a previous save state. This wouldn’t have been horrible however, if I hadn’t been playing for 12 hours and I am one of those sick freaks that only saves his game at the end of every play session. I almost broke a 60 dollar game, a 400 dollar television, and an Xbox One that day. 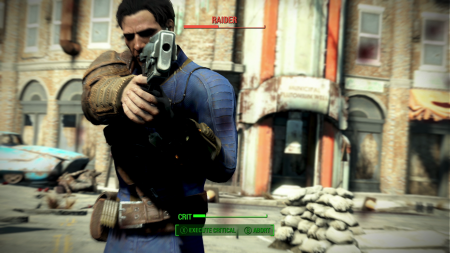 Despite the combination of my own personal shortcoming and an incredibly rare (I guess) glitch, I can still safely say that Fallout 4 has my reward for being one of the greatest games I’ve ever played. It tops Skyrim, as well as Fallout 3 and New Vegas both, in my mind.

The crafting system, interesting story, and simply amazing side-quests (one of which includes a savage deathclaw, but I won’t tell you that one because it could ruin the surprise), and fantastic gunplay, (which was inspired by Destiny of all things, by the way) come together to create the most in-depth roleplaying games I’ve had the fortune of playing.

And yes, I lost 12 hours of gameplay, but that’s okay, because typical to the Fallout series’ style, I simply went a different direction and everything stayed fresh and interesting.