Shadowman is about to make a big return to the pages of Valiant Comics, and he’s crashing Ninjak’s party to do it. 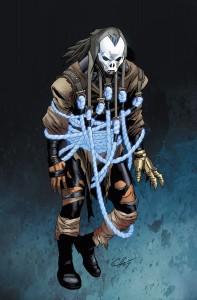 In 2015, a covert military intelligence unit sent a team of 20 agents and one special operative into a parallel dimension. Only one came back.

The purpose of their mission was classified. Now, out of options, MI-6 has recruited their most elite operative – codname: Ninjak – to follow the doomed mission’s sole witness – the mysterious occult specialist Punk Mambo – back into the dimension called Deadside…and bring her missing teammates home.

What will they find there? And who will be waiting for them?

Also unveiled today, Valiant has revealed the much-anticipated new design for Shadowman – the fallen hero at the epicenter of MI-6’s lost expedition into Deadside – by fan-favorite artist Clayton Henry (HARBINGER WARS). Unseen for more than a year, OPERATION: DEADSIDE will be the first step towards Shadowman’s long-awaited return to the Valiant Universe…but also presents a new series of challenges for the wayward guardian once tasked with protecting humanity from the horrors of Deadside’s nightmare realm.

“OPERATION: DEADSIDE is the first installment of an epic plan for Shadowman that we’ve been crafting behind the scenes for more than a year, and Matt Kindt and Doug Braithwaite have built one hell of a story to do it justice,” said Valiant Publisher Fred Pierce. “But it isn’t a horror story per se. In the vein of the best sci-fi action blockbusters like Aliens and The Abyss, OPERATION: DEADSIDE is an intense tale of humans pushed to the limits against an unimaginable foe at the edge of existence itself.”

Sounds appropriately creepy for a Shadowman tale. And each issue featuring the arc will have special glow-in-the-dark covers too, so this one is getting the full treatment from Valiant. And Operation Deadside is no mere way to get Shadowman back into continuity either, as the storyline is set to be a turning point for the whole of the world that Valiant has forged in its books.

We’ve already seen Ninjak’s badass otherworldly set of armor, which is still pretty awesome, but I have to mention her that I also really like the Shadowman design. Sure he’s less superhero-y than he’s looked in the past, but chances are that you wouldn’t look so great if you were trapped in the netherworld for any length of time either.

Operation Deadside kicks off in Ninjak #10, which arrives in stores and digital download shops on December 9th from the team of Matt Kindt and Doug Braithwaite.

Jason's been knee deep in videogames since he was but a lad. Cutting his teeth on the pixely glory that was the Atari 2600, he's been hack'n'slashing and shoot'em'uping ever since. Mainly an FPS and action guy, Jason enjoys the occasional well crafted title from every genre.
@jason_tas
Previous Is a Twilight Princess ‘HD” on the way for the Wii U?
Next Movember Gets Its Own iOS Game