A brand new world in the Star Wars saga, Jakku is the scene of the New Republic’s assault on Imperial holdouts and an important piece of the story post-Return of the Jedi. 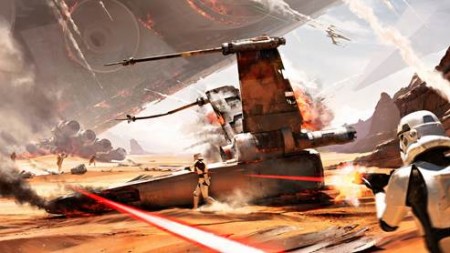 The above image is all that’s being shown as to the Battle of Jakku, a fight that was waged before the first film in the new trilogy dawns this December. The battle will be exclusively shown in the upcoming Star Wars Battlefront game from EA and DICE, where you’ll actually be able to take part.

The map pits the Rebellion, which has become the New Republic in the wake of the second Death Star’s destruction and the deaths of Darth Vader and Emperor Palpatine, against an Imperial force that’s fortified themselves in the remote world of Jakku. For now, this is the only look at a battle that figures to feature in The Force Awakens, and is kind of a pivotal moment in the Star Wars universe.

You can get in on that action early of course, if you pre-order the game, and start playing on December 1st. Everyone else will have to wait another week for the title’s official launch on the Xbox One, PS4, and PC. So really, if you’re going to get it anyway, you might as well pre-order and get it before everybody else.

Jason's been knee deep in videogames since he was but a lad. Cutting his teeth on the pixely glory that was the Atari 2600, he's been hack'n'slashing and shoot'em'uping ever since. Mainly an FPS and action guy, Jason enjoys the occasional well crafted title from every genre.
@jason_tas
Previous Multipurpose Roccat Aluma headset now in stores
Next Uncharted 4’s special editions outlined