In light of the recent media firestorm that was kicked off by just released details from a lawsuit, Terry Bollea’s Hulk Hogan character has all but vanished from WWE’s history books. And you can forget about seeing him in WWE 2K16. 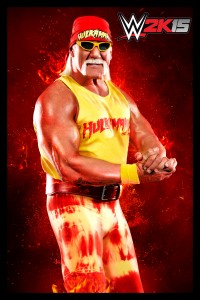 There’s little word for what’s happening here other than to say that it’s just kind of sad. It’s not only is it the assured end of a career, but also a history-altering event for Terry Bollea which sends him out on a decided low. And as far as WWE 2K16’s inclusion of the character that he portrayed for so many years, and maker 2K Games, the fallout is certainly understandable.

Whatever your feeling on Hulk Hogan though, the character was inarguably one of the biggest reasons (maybe the biggest reason) that pro wrestling ‘made it’ as a mainstay of the entertainment industry in the 1980s. Vince McMahon’s company, which he took over from his dad, built its foundation on over-the-top characters and incredible talent. These men and women were not only extremely athletic (well, most of them were), but also wonders on the mic. Simply put, they knew how to work a crowd, and there was nobody as good at that as Terry Bollea, A.K.A. Hulk Hogan.

Bollea was a wonder who could light up an arena, a phenom (apologies to the Undertaker) who’s legendary reign with the heavyweight title belt and series of feuds with other top talent has really yet to be completely matched within the company. Actually, I don’t think it’s speaking out of turn to say that it has yet to be matched anywhere in pro wrestling. Even when he turned to WCW and became a ‘bad guy’, Hogan was massively popular. The heel nWo faction was often more popular than the heroes that it faced in the WWE’s rival company, and Hogan’s presence was a huge part of that.

That was the ‘on screen’ character, but the ‘off screen’ man was a little less, well, liked. While I certainly can’t substantiate it, Bollea has a reputation of keeping other wrestlers down, and quashing feuds with others in order to keep them lower on the rankings than him. He’s also reportedly refused to job (read: lose) to some of these guys, which is hardly unique to him in the business, but does nevertheless show that he wasn’t exactly a team player when he was wrestling full time.

Again though, those are all Bollea’s worst points from his career. And while they aren’t good to see to be sure, what he did for the sport I believe massively outweighs any negatives that you could point out. Which brings us up to the present day.

In 2012, Gawker Media outed Hogan as part of a tawdry sex-tape scandal. It was a revolting little escapade that involved radio show host Bubba the Love Sponge and his wife… and I’m not going to go any deeper than that quite frankly. You can google it if you wish, though I don’t recommend it if you’d like to have any sort of good memories of the Hulkster. But I digress, because all the current trouble for Bollea is not necessarily coming directly from that reveal, but the lawsuit that he filed against Gawker in light of it.

The resulting trial has shed light on more than the media outlet originally broadcast… stuff like Bollea using a certain racist term that begins with an ‘n’. Needless to say, that hasn’t played so well with pretty much anyone.

2K Games, for instance, has announced that the Hulk Hogan character won’t be appearing in the upcoming WWE 2K16 video game in any way. This announcement comes one year after the ‘Hulkamania Edition’ of WWE 2K15 was released, a special edition of last year’s game that celebrated Hogan’s history with the company. For their part, 2K has said that they respect “the way that our partners choose to run their business and manage our partnerships accordingly”. As such, there’s no Hogan in this year’s game because the WWE has severed ties with him and is now removing most mentions of him from their history.

Hot off of a search of WWE.com for ‘Hulk Hogan’, I can tell you that there’s only minor mentions of him here and there. Sure I got 1,690 returns, but none were features, and he appeared only in stuff like ‘photos that scream the 80s’ bits. And on top of that, he’s also been removed from the roster of the WWE’s Hall of Fame.

I can’t pick too much at any of this though, as the wrestling giant is merely trying to stay out of any negative space and, lets face it, Hogan isn’t with them any more in a competitive manner, so it’s not like they have too much of a reason to keep him around and tout his name. Still though, as a fan (of wrestling in the 80s, particularly) it’s a sad thing to see when one of the biggest and most influential characters of all time is deleted from the company’s history.

As I said, I totally understand that there were mistakes made by Bollea and that the WWE might not want to pursue business with him in the present, but it should also be pointed out that what happened happened years after his career in the ring was over. I believe that past mentions of his portrayal of Hulk Hogan should remain as a tribute to what once was, not be erased and flushed down the drain because of the man that is and the stupid things that flew out of his mouth.

Maybe it’s just the fan in me looking on with rose-colored glasses, but Hogan’s a big part of the golden age of wrestling, and removing him completely seems like a little too broad-sweeping of a move. What do you think though?

Do you think that current events should result in the deletion of the past, or that one thing should remain separate from the other? Either way, it looks like you’ll be putting that Create a Wrestler to good use in this year’s WWE 2K title if you want to have some matches as Hogan.

Jason's been knee deep in videogames since he was but a lad. Cutting his teeth on the pixely glory that was the Atari 2600, he's been hack'n'slashing and shoot'em'uping ever since. Mainly an FPS and action guy, Jason enjoys the occasional well crafted title from every genre.
@jason_tas
Previous Star Wars heads in a new direction with a new artist in issue #8
Next Second SPECTRE trailer released, continues to look awesome