Home / News / SDCC 2015: Join Telltale Games this Saturday for a live reading of The Walking Dead

SDCC 2015: Join Telltale Games this Saturday for a live reading of The Walking Dead

As Comic Con special events go, this one’s pretty cool. Telltale Games will be putting on a special live performance of The Walking Dead this coming Saturday night in San Diego. 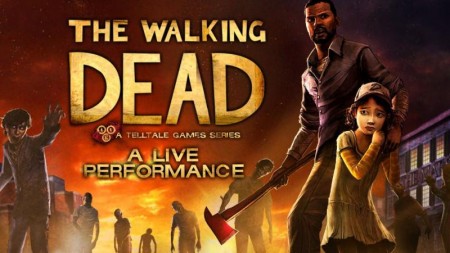 The cast of the original season of Telltale’s The Walking Dead adventure game will be reprising their roles as the characters that you know and love (and saw brutally killed…) at Petco Park this weekend. Home of the Padres MLB team, Petco will showcase the actors as they play out a “series of scenes” from that ground-breaking, blockbuster first season.

Tickets (which you can buy here) are $30.00 USD, and get you access to not only the stage show later at night, but also Walker Stalker and Fan Fest from 11am-5pm (pacific), both of which also take place at the Park. Doors to the live performance though, will open up at 7:30pm (the show starts at 8:00pm) and you’ll enter through the East Village entrance, which is also fondly known as ‘the beach’ entrance.

Not in SD this Saturday? You can still watch the festivities via the Twitch feed here.

Don’t forget also that Walker Stalker Fan Fest will be hosting a panel with the cast from the game this Friday, the day before the live performance. You can catch more details on that right here, it starts at 11:30am pacific time.

Oh, and then there’s the Skybound Entertainment Celebrates 5 Years panel, which is scheduled for later today. At that presentation, you’ll pick up a few more rid bits about the upcoming The Walking Dead: Michonne mini-series from Telltale. It kicks off at 3:30pm pacific this afternoon.

Whew, that’s a lot of zombies.

Jason's been knee deep in videogames since he was but a lad. Cutting his teeth on the pixely glory that was the Atari 2600, he's been hack'n'slashing and shoot'em'uping ever since. Mainly an FPS and action guy, Jason enjoys the occasional well crafted title from every genre.
@jason_tas
Previous PlayStation Now Will Extend Life Cycle of Video Games
Next Valiant’s Book of Death mini continues in August with The Fall of Ninjak