Secret Wars is an ending and a new beginning for Marvel Comics’ heroes and villains. 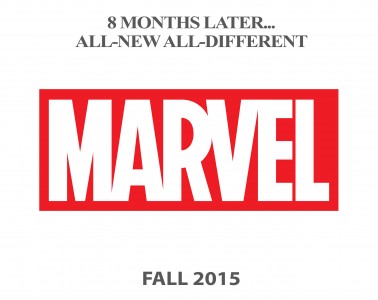 Well, in all fairness, I’m not entirely sure what ‘8 Months later’ is supposed to mean. Nor am I sure what the tag line ‘All-New, All-Different’ is referring to, though I’m guessing it’s safe to assume that there’s going to be a brand new quo in the Marvel side of comicdom after Secret Wars comes to a close and some loose ends and aftermath get death with.

It’s also interesting to note that All-New, All-Different is a clear play on the classic Giant Size X-Men #1 tag, which of course leads me to believe that there’s some major X-news coming. Here’s the thing about that though, Marvel has clearly relegated the X-Men and its cadre of mutant characters to the back-burner (why is up to you to decide), so I don’t think it’s that exactly. Maybe though, the publisher might be referring to an overhaul of its entire line. Maybe that long-rumored, DC Comics-matching, soft reboot is indeed on the way after all.

Marvel has denied that in the past, saying that their universe wasn’t broken and that it didn’t need a rebooting of any kind, but honestly, I think there are more than a few fans who’d like to see it. Especially after all the retconning that’s happened in the past few years. I know I would love it.

Anyway, that’s all conjecture as of right now. So for the next few months, just enjoy the Secret Wars and think of what might be coming…

Jason's been knee deep in videogames since he was but a lad. Cutting his teeth on the pixely glory that was the Atari 2600, he's been hack'n'slashing and shoot'em'uping ever since. Mainly an FPS and action guy, Jason enjoys the occasional well crafted title from every genre.
@jason_tas
Previous Capcom keeps the remake train rolling, will have RE0 remake ready for 2016
Next Check out a lot more on the story behind that new Mad Max game