One of the best X-Men events of all time makes a fiery impact on Battleworld in Inferno #1. 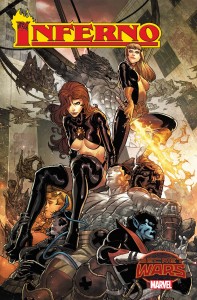 Ah the X-Men, one of my favorite comic properties of all time (easy) and one of the biggest influences in my early fandom of the art form. It seems like no other book or group of characters has gotten more shifted around and mixed up in the last few years either. Sure, the industry in general seems obsessed with #1 issues, restarts, and otherwise mucking around with established characters over the last few decades, but seemingly none have gotten a heavier hand in this area than Marvel’s band of Merry Mutants.

The team has gone through shake-ups aplenty, with events that saw their stoic field-commanded turned into a villain, their leader murdered by that field-leader, and their most beloved member gutted of his powers and then killed off. Yep, it’s been a rough time to be a longtime fan. But that’s all by the boards here, because we’re talking Inferno, one of the greatest X-Men event books of all time, and one that bled into the larger Marvel U in a major way.

On Secret Wars’ Battleworld though, this event played out a little differently than the Marvel U 616 version…

This May, the world of Secret Wars takes you back to the fiery wastes of Manhattan as the X-Men delve back into…INFERNO! Today, Marvel is pleased to present your new look at INFERNO #1 – from writer Dennis Hopeless (Spider-Woman, Avengers Arena) and artist Javier Garron (Cyclops)! Welcome to the ruins of Manhattan, now ablaze with fire and brimstone. Five years ago, a band of demons rose up out of those fiery depths and turned the world to Hell on Earth. The X-Men were all that stood in the way of complete obliteration. The X-Men fought for survival. The X-Men failed…

Now, on this the fifth anniversary of the fall of the world, Colossus is leading a surviving team of X-Men back into the Inferno. None of them know what lies on the other side, but one thing is certain, they’re not coming back without his sister! Now, amidst the fire and the fury lies demons, ghouls, and the Goblin Queen herself. Colossus and his team of Nightcrawler, Boom Boom and Domino will face them all in an effort to save Illyana. But can she be saved? Or has she already been lost? The answer lies beyond the fires True Believer as INFERNO #1 is set to burn up the comic stands this May!

Pretty cool team, pretty awesome premise. Hopeless is a solid writer too, and I happen to love Garron’s work, so I’m probably looking forward to this one more than almost any other Battleworld/Secret Wars crossover. Of course, I’m biased since I have the hardcover Inferno tome sitting on my bookshelf, but that’s neither here nor there.

Jason's been knee deep in videogames since he was but a lad. Cutting his teeth on the pixely glory that was the Atari 2600, he's been hack'n'slashing and shoot'em'uping ever since. Mainly an FPS and action guy, Jason enjoys the occasional well crafted title from every genre.
@jason_tas
Previous P.T. is still available on the PSN- hurry up and download it!
Next Looks like there’s more Watch_Dogs coming